Zaki, Mohsen, Kamal Eldein, Yousef, and Fagir: Chitosan nanoparticles biosynthesis and characterization for Inhalation as an operative treatment of tuberculosis

Chitosan nanoparticles have expanded growing attention for Nano-medicine, development of new therapeutic and biomedical engineering with improved availability, increased specificity, and compact toxicity. The present study aim to synthesis and characterize inhalation of chitosan nanoparticles for anti-mycobacterial supply to the lungs. The ionic gelation method followed spray drying was used for chitosan nanoparticles development. The results showed that the obtained particles had a spherical smooth shape with an average size of 255 ± 3.5 nm. Post nebulization drugs were detected in numerous organs (lungs, spleen and liver) till twenty four hours. A single dose of drug-loaded had a chemotherapeutic efficacy more effective against the mycobacterium than other available drugs.

Mycobacterium Tuberculosis is a communicable disease containing the tubercle bacilli.1 Mycobacterium Tuberculosis is spreads by inhalation airborne droplets containing- bacilli.2 The Mycobacterium tuberculosis were reported in 95 % of cases in developed countries and million new cases of infection detected each year which is responsible for over two million deaths every year. Mycobacterium tuberculosis global incidence rate is highly growing each year by almost 1%. Anti-Tuberculosis drugs resistance continued to be documented as a clinical problem.3 Patient non-compliance to anti-tubercular drug therapy leads to a great therapeutic failure,4 In medicines the use of natural products is well known in many developing countries. The natural products privilege that is cheaper, more effective and impart least side effects as compared to synthetic medicines.5, 6 Thus, increasing examination has been given to chitosan and its derivatives. Chitosan is derived from naturally occurring sources, including the exoskeletons of arthropods such as shellfish like shrimp, Chitosan contain highly reactive functional groups, high adsorption capacity, Antimicrobial, and anti-fungal, even anti-tumor influence.7, 8 Chitosan is widely predictable for its effective broad spectrum antimicrobial activity and low toxicity to mammalian cells. Chitosan antimicrobial action mode is not completely understood, the chitosan molecular structure is requirement for its anti- bacterial activity. It is well9, 10 Chitosan used as an anti-bacterial against a wide range of bacteria, yeasts, and fungi in vivo and in vitro.11 Chitosan antibacterial activity is subjective by a number of factors that include the degree of polymerization and chemical properties.12

In new centuries, nanoparticle developments are being widely considered for direct delivery to the lungs via the pulmonary route.13 Various biodegradable natural origin polymers (cellulose, gelatin and starch) are used as transporters for drugs, but chitosan was considered for this study due to its biodegradable nature as a non-toxic polymer which has adhesive and membrane permeability. Chitosan can controls the drug release, extending the duration of treatment effects and delivering the drug to the specific sites in body. The pulmonary route escapes the problems by ingestion route such as reduced solubility, thereby lead to reduction in the dosing frequency, and development of patient passivity. The aim of the study is to a bio-synthesis of the chitosan nanoparticles containing rifampicin for antibacterial use. Chitosan nanoparticles have potential role as polymeric platforms for the development of new therapeutic drug release technique with better distribution and increased sensitivity and decrease toxicity against Mycobacterium Tuberculosis.

Production of chitosan from crustacean shell generally consists of three basic steps: demineralization, deproteinization, and deacetylation.14 The shells were demineralized by agitating continuously with 5% HCl at the ratio of 1:15 (w/v, shell to solution) 36 h at room temperature. The demineralized shells were treated with 5% NaOH solution at the ratio of shell to solution of 1:10 (w/v) at 90-95°C for 6h. The deproteinized shells were filtered and washed with tap water until NaOH was removed completely, then dried overnight in an oven at 55-60°C. The shells were filtered and washed with tap water until became neutral. Then deacetylation of chitosan was carried out by hydrolyzing with 80% Na OH at the ratio of 1:20 (w/v, chitin to solvent) at 90-95°C for 5 h. This product was washed with tap water until it became neutral and dried overnight at 55- 60ºC. In the preparation of chitosan solutions, 1.0% (w/v) chitosans were dispersed in a 1.0% (v/v) acetic acid solution.

Mycobacterium tuberculosis strains H37Rv were obtained from the Mycobacterium tuberculosis unit reference strain. Cultured at 37˚C in Middlebrook 7H9 broth (Becton Dickinson, Sparks, MD) supplemented with 0.2% glycerol (Sigma Chemical Co., St. Louis, MO) and 10% OADC (oleic acidalbumin-dextrose-catalase; Becton Dickinson) until logarithmic growth was reached. Each culture was mixed with a sufficient volume of sterile supplemented Middlebrook 7H9 broth to achieve a turbidity equivalent to that of McFarland’s No. 1 standard. To obtain the test inoculum, this suspension was further diluted 1:50 with the same culture medium to approximately 6 × 106 colony-forming units (CFU)/mL immediately before use. A change in color from blue to pink indicated the growth of bacteria, and the MIC was defined as the lowest concentration of drug that prevented this change in color.

Animal care and all experimental procedures were carried out in accordance with international guidelines governing animal care and use for research. For Female mice (6–8 of weeks age, 20–25 g) were obtained from a nearby provider and the animals are gathered in isolated cages, in controlled temperature (23–25ºC), humidity (60%), light and dark cycles of 12 hours each. The animals were encouraged on standard pelleted eat less and water. Mice were kept for at least 3 days earlier to test methods and were ordinarily housed all through the observational period. The mice were particular pathogen free.

In vivo Experimental infection were in animal house level 3 Biosafety and Biosecurity system ,Female mice (6–8 of week age, 20–25 g) were infected with 4x 107 bacilli/ml in 0.1 ml of 0.9% NaCl, through the aerosol route (inhalation exposure system). The animals were then divided into the following groups: Group 1, control group; Group 2, naïve group; Group 3, free drug, aerosol; and Group 4, nanoparticle-loaded anti – tuberculosis drugs. The animals were sacrificed after 2 and 4 weeks of the test experiment starts ; lungs was removed, homogenized in sterile normal saline solution and plated Agar plates for (CFU) colony-forming unit estimation on the 14th and 28th days post inoculation. 18 Nebulizer system (Pan Century, USA) was used in this study. Drug disposition studies for single dose, female mice were grouped as follows, with eighty animals in each group: Group 1, free drug, aerosol; and Group 2, nanoparticle-loaded with aerosol anti-tuberculosis drugs. Animals were sacrificed and drug levels were determined in lungs. 19

Minimum Bactericidal Concentration determination by using the paper disc method Chitosan nanoparticles screening and its solvents for antibacterial activity against Mycobacterium tuberculosis strain H37Rv were done using the paper disc method.20 For the treatment, each of 0; 150; 300; 600; 1200 μg/mL chitosan nanoparticles solutions were slowly absorbed into the sterilized paper disc (diameter: 8 mm) and adhered to the surface of the plate on which Mycobacterium tuberculosis strains H37Rv at a concentration of 106 CFU/ml had been inoculated in Middlebrook 7H9 broth. Sterilized distilled water was used as a control. After culturing for 24 h in an incubator at 37°C. Antibacterial activity was defined as the diameter (mm) of the clear inhibitory zone formed around the discs. MBC was defined as the lowest concentration that induced the clear inhibitory zone formed around the discs.

Statistical tests were performed with Graph-Pad Soft- ware. A difference with a value of p < 0.05 was considered statistically significant.

Tuberculosis is a chronic disease caused by Mycobacterium tuberculosis. The emergence of antibiotic-resistant strains of this species underscores the need for new effective drugs against resistant mycobacteria as medications.21 The uses of natural product as traditional medicines are accepted, particularly in developing countries. This led us to the investigation of the effects of chitosan nanoparticles from shrimp on anti-mycobacterial activity. Chitosan nanoparticles had a spherical shape with an average size of 230 - 4.5 nm. (Figure 1). We modified chitosan into chitosan nanoparticles with used sodium

Nanoparticles are easily captured by the alveolar macrophage of lungs.18 The higher drug encapsulation observed for Chitosan nanoparticles in this study can be attributed to the higher drug/polymer ratio, as well as an excellent ionic gelation between Tri-polyphosphate and chitosan.22 The release behavior of Rifampicin from the Nano particulate formulation followed a biphasic pattern, that is, an initial burst (40–50% within 5 hours ) followed by a slower sustained release (90–95% for up to 72 hours) . An initial burst release of RIF from nanoparticles could be due to rapid dissolution of drug crystals located on the surface or present beneath the nanoparticle surface. 14 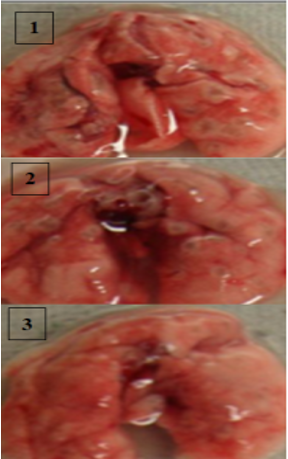