Mistry and Pathak: To study the prevalence & clino-mycological profile of Otomycosis in Saurashtra & Kutch region of Gujarat

Background: Otomycosis is a superficial, sub-acute or chronic infection of the external auditory canal. It is worldwide in distribution with a higher prevalence in the hot, humid, and dusty areas of the tropics and subtropics. A wide variety of fungi can cause Otomycosis.

Objectives: To determine the demographic profile & spectrum of fungi involved in Otomycosis in saurashtra & Kutch region of Gujarat.

Conclusion: Otomycosis should be suspected clinically and should be confirmed by laboratory diagnosis to prevent unnecessary use of antibiotics & there by antibiotic resistance. Mycological diagnosis is important to differentiated from bacterial infection, since symptoms (pruritus, otalgia, otorrhea and hypacusis) are not specific.

Otomycosis is an acute, sub-acute or chronic fungal infection of the Pinna, the external auditory meatus and the ear canal.1 This is commonly seen in tropical and subtropical regions of the world. The frequency to otomycosis depends upon different climatic conditions with higher prevalence in the hot, humid and dusty areas.2 This is worldwide in distribution with prevalence ranging from 9% to 30% among patients presenting with signs and symptoms of otitis externa and discharging ears in otolaryngology settings.3, 2

Though Otomycosis is rarely a life-threatening disease, it is a challenging and frustrating entity for both patients and otolaryngologists because it usually requires long-term treatment and follow-up. In spite of this, recurrences may occur.4

Otomycosis is commonly associated with increased ear canal moisture, warmth and treatment of a bacterial infection with long term topical antibiotic therapy, which can lead to depletion of the protective cerumen layer, maceration of underlying skin, increase in ambient pH and a modification of the microbial flora of external auditory canal, thereby selecting for untreated organisms. A medical history of diabetes and / or an immunocompromised state may be present.5 Most patients suffering from early otomycosis complain of severe itching which often progress to pain, hearing loss, and often leading to tympanic membrane perforations.6, 7, 8

The flora found in the EAC is made up of a series of microorganisms viz. genus Aspergillus or yeast-like fungi, Candida spp., Staphylococcus aureus, Staphylococcus epidermidis, Streptococcus species, Micrococcus, Corynebacterium species, Bacillus species, Pseudomonas aeruginosa, Escherichia coli, Haemophilus influenzae, Moraxella catarrhalis etc. Commensal flora is not pathogenic as long as the balance between bacteria and fungi is maintained in the EAC.9

This study is undertaken to determine the spectrum of fungi involved in Otomycosis including KOH and culture results in Tertiary care hospital, Rajkot.

This is a retrospective study conducted in the Dept of Microbiology, P.D.U Govt. Medical College & Civil Hospital, for a period of 9 months between June 2018 to Feb 2019, on patients attending the Department of ENT. A total of 101 clinically suspected cases of otomycosis were enrolled for the study. Mycological study was carried out on debris, scrapping or exudates samples from auditory canal(s), using two sterile cotton swabs.

Cultures were incubated in parallel at room temperature (25°C) and at 37°C for 4weeks. On alternate days, cultures were examined for growth. Identification of fungi was done by standard procedures.

Culture plates were examined for growth every 2-3 days. The presence of fungal elements in KOH mount was confirmed by growth on SDA. If no growth was obtained on SDA after 4 weeks, then culture was considered sterile. If growth was seen on SDA medium, the morphology of fungal isolates was further studied by using the Lacto Phenol Cotton Blue (LPCB). Presumptive identification of Candida spp. was done by using GERM TUBE TEST. The Candida strain was further grown on CORNMEAL AGAR and Hichrome Media for species identification. 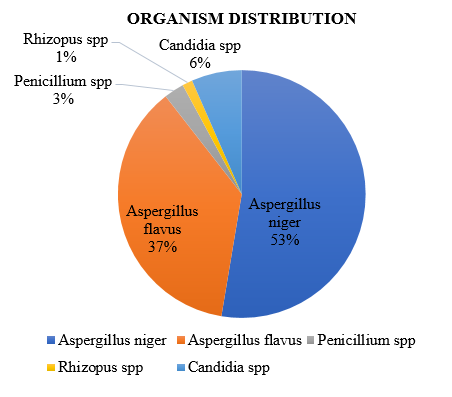 Correlation of KOH and Fungal culture

Otomycosis is a chronic superficial fungal infection that affects the deeper ear canal skin and the tympanic membrane. Otomycosis is one of the most common presenting diseases at the Otorhinolaryngology Outpatient Department particularly in the tropical and subtropical countries. Otomycosis remains common source of misery for patients. Often remains unnoticed and unattended until severe pain occurs. Various factors pave the way for saprophytic fungus to gain foothold in external canal skin such as trauma by frequent ear cleaning, topical ear drops etc.

The most predominant agent for otomycosis in the present study was A. niger (52.63%) probably due to its high preference for the external auditory canal and its ability to produce a great amount of conidia. This finding is comparable to other study by Kumar R et al, 15 Sampath Chandra Prasad et al 16 in which the most common pathogenic fungus was A. niger. However, the results obtained by Kaur et al 17 show that in the tropical regions, the commonest aetiologic agents accountable for otomycosis are A. fumigatus (41.1%) and A. niger (36.9%). Other fungi that have been associated with otomycosis in our study were A. flavus, Candida spp, Penicillium spp, Rhizopus spp.

Fungal diseases are not related to gender, but some studies had different results around otomycosis. In our study, infection of otomycosis was seen more in men than women which is consistent Agrawal Priti et al 12 and H.S Satish et al. 18 However, some studies like Visweswara Rao Suraneni et al, 19 Kiakojuri K et al 20 and Bhat K. S. et al 21 showed female preponderance.

An analysis of the age group revealed that otomycosis can affect any age from 11-20 year through more than 60 years. Whereas the incidence was found to be low below 20 years and 51-60 years. In our study the occurrence was high in the age group 31-40 years which is similar to finding in Panigrahi Monalisa et al, 18 Gupta Suharshi et al. 19

Otomycosis was found to be predominantly unilateral with the right side of ear being more affected when compared to left. The occurrence of bilateral otomycosis is very low. 20, 21 In this study, bilateral involvement was found in 1.3% cases, which is consistent with the findings of Sabz et al. (2019) who observed bilaterality in 9% of the patients.22 Otomycosis is mostly unilateral or associated with slight cases of bilateral otomycosis. This indicates that it is not a very contagious pathology without predilection for one side of the ear.

In my study, Aspergillus species was the commonest fungi involved in Otomycosis with male predominance, affecting 31-40 years of age in majority and unilaterality predominance. Otomycosis should be suspected clinically and should be confirmed by laboratory diagnosis to prevent unnecessary use of antibiotics & there by emergency of antibiotic resistance. Mycological diagnosis is important since symptoms (pruritus, otalgia, otorrhea and hypacusis) are not specific so, laboratory diagnosis helps to know the exact etiology of Otomycosis to initiate appropriate antifungal therapy in time. Microscopic smear examination cannot be taken as evidence of negativity for fungal presence and has to be confirmed with culture of the specimen the gold standard.