Introduction: Now a days clinicians switch over to drug Clindamycin to treat Staphylococcus aureus infections. Clindamycin is belonging to lincosamide group. As frequent use of this Clindamycin develops resistance among patients and ultimately treatment failure.

Conclusion: This research helps to detect Clindamycin resistance among Staphylococcus aureus and role of D test before starting the treatment with Clindamycin. By these knowledge clinician can choose correct treatment and we can prevent a treatment failure.

Staphylococcus aureus (S. aureus) is a pluripotent pathogen. It is responsible for both nosocomial and community based infection. S. aureus is causing various infections that ranges from minor skin and tissue infection to life threatening consequences such as endocarditis, pneumonia and septicaemia.1, 2 There is an increased cases of Methicillin resistant S. aureus (MRSA) in recent years and it varies with geographical location and bacterial species.3, 4 For MRSA infection Vancomycin considered as drug of choice even though vancomycin usage is associated with considerable side effects and all of above more frequent use of this drug leads to emergence of Vancomycin resistance strain.5 There is increasing frequency of MRSA infections and frequently changing antimicrobial resistance pattern make clinicians to jump on the macrolide lincosamide – streptogramin B (MLSB) antibiotics to treat infections. 6 One of the effective drug is Clindamycin which belongs to lincosamide group. The antibiotics belongs to MLSB family are chemically distinct but share a similar mode of action by binding to 23s rRNA –large ribosomal subunit and inhibit protein synthesis. Bacteria resist MLSB antibiotics in different ways like, 1.Target site modification by methylation or mutation that prevents the binding of the antibiotic to its ribosomal site. 2. Efflux of antibiotic 3. By inactivation of the drug.7, 8 Expression of MLSB resistance can be constitutive or inducible. For constitutive MLSB (cMLSB) phenotype resistance, erythromycin resistance methylase (erm) genes are consistently expressed and organisms show in vitro resistance to erythromycin(E) and clindamycin (CD), and also to other members of MLSB known as constitutive phenotype resistance while in case of inducible resistance, the erm genes require an inducing agent like erythromycin (E) ,act as a strong inducer of methylase synthesis to express resistance to clindamycin (CD). So isolates show in vitro resistance to E and susceptibile to CD. This type of resistance known as inducible phenotype. In this phenotype clindamycin therapy can lead to therapeutic failure. 2, 9, 10, 11, 12 Another mechanism of resistance is antibiotic efflux through msrA genes shows resistance to macrolides and streptogramin B only. In such cases Staphylococcal isolates appear erythromycin resistant and clindamycin sensitive both in vitro and in vivo. 13 This phenotype clindamycin can be given safely. Therefore, it is important to differentiate these mechanisms of resistance.

Double disk diffusion test is used for phenotypic detection of inducible resistance. It is also known as D test as D-Shaped zone of inhibition form around clindamycin if an erythromycin disc is placed adjacent to clindamycin disc. Double disk diffusion test is very simple and easy to perform test. It is inexpensive, sensitive and easy to interpret.14 There are availability of molecular methods for detection of the erm genes, but they are costly and inconvenient for routine use. Thus, present study was done to detect the incidence of inducible clindamycin resistance in Staphylococci isolates by double disc diffusion test along with azithromycin and to study the relationship between clindamycin and methicillin resistance staphylococci in the tertiary care hospital of South Gujarat, India.

Findings of the disc diffusion test 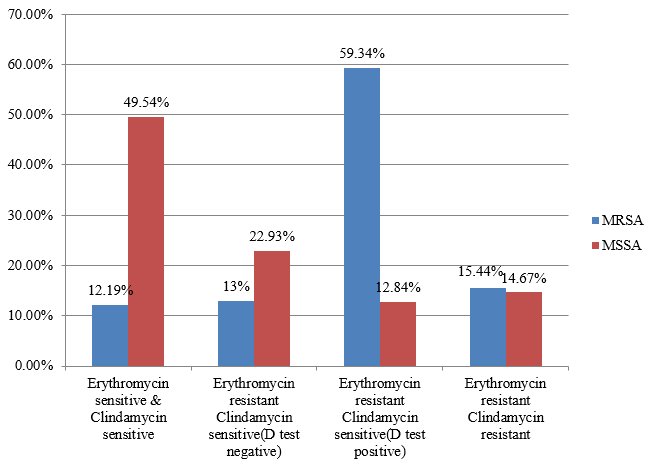 For treating the skin and soft tissue infections caused by Staphylococci, Clindamycin is a good drug of choice as it is less costlier than other newer agents, having excellent tissue penetration and accumulates in abcesses.1 It is not affected by higher bacterial load at the infection site and no renal dose adjustment required. Day by day treatment spectrum becoming narrow as increasing resistance to the Staphylococcal infection as this led to renewed interest in the use of Clindamycin.2 It is useful drug in the treatment of Methicilin sensitive and Methicillin resistant Staphylococcus aureus infection.14 tro susceptibility to Clindamycin in the case of inducible MLSB resistance.9, 11, 17 Constitutive MLSB phenotypes can be detected easily in a routine Antimicrobial susceptibility testing but inducible MLSB resistance may be missed if Erythromycin and Clindamycin discs are kept apart. Hence present study follow the routine testing of inducible MLSB, Constitutive MLSB and MS phenotypes as recommended in CLSI guidelines for Staphylococcus isolates.18 Methicillin resistance was seen in 53.01% isolates of Staphylococcus aureus as compared with other studies in India.19, 20 Of the 232 isolates of Staphylococci, 70.25% were Erythromycin resistance which is comparable to Dalela et al (66.34%).1 Erythromycin resistance reported by Lyall et al21 was 51.7% and Pal et al22 was 50.52% where as lower percentage was reported by Prabhu et al23 28.4%. In present study Inducible Clindamycin resistance rate was 37.5% which is similar to Dalela et al1 36.63% and Lyall et al21 33.3% whereas higher percentage was observed by Ajantha et al24 49%, Goyal et al25 50.6% and lower percentage of iMLSB was reported by Prabhu et al23 10.5% and Ciraj et al 26 13.1%. In present study constitutive Clindamycin reistance (cMLSB) rate was 15% which is accordance with Mokta et al1 17.14% and Lall et al27 16.6%. Higher percentage was reported by Pal et al22 46.9% where as lower percentage was observed in Patil et al28 3.55% and Mittal et al29 6.15%. In the present study 17.6% isolates showed true Clindamycin susceptibility (MS phenotype) which is similar to Patil et al 28 15.33% and Mittal et al29 15%. Lower rate of MS phenotype was reported in Mokta et al1 8% and Dalela et al2 5.94%. These all studies shows that there is a wide variation in incidence of Clindamycin resistance among clinical isolates of Staphylococcus aureus in different geographical areas. The rate of inducible Clindamycin resistance in MRSA and MSSA in present study is 59.34% and 12.84% respectively which is comparable to Pal et al22 and Mittal et al.29 Higher incidence of ICR positive cases in MRSA was reported by Angel at al30 (64% in MRSA). However higher percentage of ICR in MSSA as compared to MRSA have been reported by other studies like Schreckenberger et al31 and Levin et al10 9.25% and 68% respectively. In this present study percentage of cMLSB in MSSA and MRSA is observed 14.67% and 15.44% respectively. Gadepalli et al7 reported 38% in MRSA and 15% in MSSA while Lall et al 27 had reported 16.6% in MRSA and 4.8% in MSSA. Lowe percentage of cMLSB was found in Prabhu et al23 (16.7% in MRSA and 6.2% in MSSA) and Patil et al28 (9.6% in MRSA & 0% in MSSA).MRSA is now growing public health problem. The relationship between MRSA and ICR appears to be clinically insignificant eventhough a highly positive correlation coefficient is in present study observed. This is an alarming sign that Clindamycin therapy failure may occur without prior testing for inducible resistant phenotypes. It should be necessary to prepare local sensitivity data which help in guiding empiric therapy and for preparing antibiotic policy.

Production of erm gene and its subtypes detected by molecular methods like DNA probing, Polymerase chain reaction, RFLP etc. These tests have not done in present study. These tests are available at research institute only. This is a limitation of present study.

Now a days therapeutic treatment for Staphylococcal infection become challenging job for physicians as changing of antibiotic susceptibility pattern, so they start the treatment of severe staphylococcal infection with use of either Vancomycin or Linezolid or tegicycline or Clindamycin. But before to start the treatment with Clindamycin ICR test become necessity as prevalence of ICR varies in different studies at different places. D test is simple and cost effective test with high sensitivity. Hence each laboratory should implement the D test for detection of ICR on a routine basis. Clindamycin can’t be a choice of drug in D test positive isolates. So, result of D test is important for clinicians to choose a correct drug.

R Leclercq Mechanisms of resistance to macrolides and lincosamides: nature of the resistance elements and their clinical implicationsClin Infect Dis20023448292

G. G. Rao Should clindamycin be used in treatment of patients with infections caused by erythromycin-resistant staphylococci?J Antimicrob Chemother200045571510.1093/jac/45.5.715