Introduction: FUO/ PUO (Fever/Pyrexia of Unknown Origin) is referred to when temperature is observed above 38.30C (1010F) on many occasions over a period of > 3 weeks and unable to diagnose despite 1week of thorough investigations. Different studies reported diagnosis of malaria in 5 to 50% cases; leptospirosis in 3 to 10% cases and influenza in 8 to 12% cases Dengue fever and malaria are arthropod born diseases and endemic in many parts of India during the monsoon season. Leptospirosis and scrub typhus are zoonotic infections and are widely prevalent in areas with heavy monsoon and agrarian way of life.

Aim: To evaluate the study of various Rickettsia infections in patients suffering from Fever Of Unknown Origin.

Objectives: To understand the occurrence of infections caused by rickettsial species in suspected cases of FUO. To increase awareness and clinical suspicion among doctors for these infections.

Materials and Methods: The assay was performed using P.vulgaris OX19, OX2, OXK strains according to manufacture’s instructions by tube method. Serum will be diluted from 1/20 to 1/640 titer. A single Weil Felix titer of >1:160 or fourfold rise in titers on repeat testing starting from 1:40 will be accepted as a positive result.

Result: A total 100 cases were including in my study in which 28 cases were positive. Out of 28 positive rickettsial samples, females were 17 and males were 11. Spotted Fever(9), Endemic Fever(8), Epidemic Fever(7), Scrub Typhus Fever(4).

Conclusion: With the growing number of cases detected in India, scrub typhus is fast emerging as a public health threat and also due to limited diagnostics leading to underreporting, Weil Felix test could be used in adjunct with Enzyme-linked immunosorbent assay and blood parameters in the diagnosis of rickettsial diseases.

FUO/ PUO (Fever/Pyrexia of Unknown Origin) is referred to when temperature is observed above 38.30C (1010F) on many occasions over a period of > 3 weeks and unable to diagnose despite 1week of thorough investigations.1 Different studies

reported diagnosis of malaria in 5 to 50% cases; leptospirosis in 3 to 10% cases and influenza in 8 to 12% cases Dengue fever and malaria are arthropod born diseases and endemic in many parts of India during the monsoon season. Leptospirosis and scrub typhus are zoonotic infections and are widely prevalent in areas with heavy monsoon and agrarian way of life.2 Rickettsial infection was known in the past especially in times of war and natural calamities like famine, drought etc. Family Rickettsia is phylogenetically occupying position between bacteria and viruses. These are tiny, gram negative coccobacilli or sometimes variable in shape located intracellularly hence referred to as intracellular obligate parasitizes and they are majorly spread by arthropods.

Arthropods those are responsible for their transmission are lice, fleas, ticks and mites in which they reside in the gastrointestinal system. In man, they mostly invade the endothelium of vessels and reticuloendothelial cells.

There are three genera: Rickettsia, Orientia and Ehrlichia which belong to its family. Coxiella burnetii causative agent of Q fever and Rochalimaea quintana causative agent of trench fever were previously included in the family however they have been removed from the group as they were not satisfying all the criterias of inclusion. Q fever is not primarily transmitted by arthropods while Rochalimaea quintana is not an obligate intracellular organism.

To These organisms cannot survive outside the cells and do not grow on basic cell free media therefore they are isolated in laboratory animals and can be cultivated in various tissue cultures and cell lines.3

Gram stain is not satisfactory for staining rickettsia and special stains like Giemsa or Giemenez stain give satisfactory results in the diagnostic modalities.

Hence it can be conveniently said that Rickettsial infection is caused by diverse group of organisms with variable characteristics however few general common features are mentioned below:

Rickettsial disease in India is not as uncommon as believed. These diseases are commonly seen in the rainy season i.e. from the month of July to November as this time is favourable for the multiplication and development of arthropods.4

Rickettsial infections are diagnosed poorly in India as they present with non-specific symptoms, poor awareness and lack of suspicion among clinicians and also the diagnostic facilities are not up to the mark.5

The assay was performed using P.vulgaris OX19, OX2, OXK strains according to manufacture’s instructions by tube method. Serum were diluted from 1/20 to 1/640 titer. A single Weil Felix titer of >1:160 or fourfold rise in titers on repeat testing starting from 1:40 were accepted as a positive result.

The samples were obtained from patients admitted in Teerthanker Mahaveer Medical College & Research Centre, Moradabad. 100 clinical samples received as per inclusion and exclusion criteria were processed over the period of 10 months from September to December in which 28 samples were positive for Rickettsia. Out of 28 positive rickettsial samples, females were 17 and males were 11. 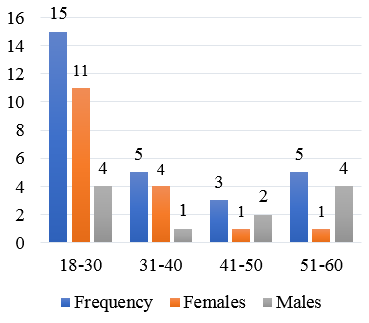 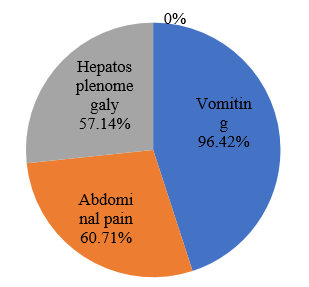 In our study, fever was the most common symptom seen in 100% cases as we selected patients with fever of unknown origin. Other symptoms commonly seen in our registered patients were vomiting 96.42% followed by abdominal pain 60.71% and Hepatosplenomegaly 57.14%. 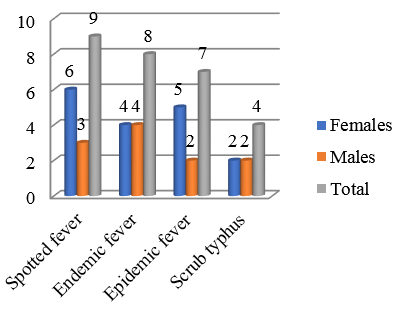 Rickettsial disease is an acute infectious disease transmitted to humans by ticks mites or lice. They are underdiagnosed because of their varied presentation and lack of availability of reliable specific laboratory tests. Rickettsial fever can be present with conjunctivitis generalized oedema, meningoencephalitis and pupura fulminance.

Analysis of age wise distribution of positivity for rickettsial infections revealed that it was predominantly seen in young age group. In our study majority isolation was seen in adults belonging to the age group of 18-30 years then between 31-40 years and 51-60 years accounting for 17.85% of cases and the least cases seen in the age group of 41-50 years. This is in accordance Vinod Kumar C.S et al shown the commonest age group was of the age < 40 years.6

The present study demonstrates the common symptoms found in these cases were vomiting 96.42% abdominal pain 60.71% and Hepatosplenomegaly 57.14 %. This is in agreement with some earlier studies like Pawan K.G. et al. showed in their study the most common symptoms found was vomiting100%, abdominal pain 64.3% and Hepatosplenomegaly 60.0%.1 In contrast, few investigators showed various results. Vinod Kumar C.S. et al showed in their study pyrexia was the major clinical presentation then myalgia and headache were also common presenting features.6

Hence we can safely say that the clinical picture observed in the current study is quite similar to any other febrile illness like malaria, dengue, chikungunya etc. and hence it can be considered as a tool for diagnosis.

Seropositivity during this study clustered after rainy season, this is because mites are active during or at the end of rainy season. Earlier studies from India reported a similar period of disease occurrence.8

Weil Felix test is a common modality used for the diagnosis of rickettsial infections. There are many advantages associated with this test and to name the few are easy availability, cheap kits, no expertise needed to perform the test and many more.8 It is based on the principle of Heterophile agglutination where the patients infected with rickettsial diseases cross react with the commercially avaible antigens prepared from Proteus spp. OX-19, OK-2, OX-K.

However sensitivity and specificity of this test is very low and it can be of help in areas where advanced diagnostic modalities are not available especially in developing countries like India. There was no specific symptom detected in these cases and therefore clinical suspicion is weak. So it is suggested that all patients presenting with PUO/FUO should be screened for rickettsial infections and it should be kept in the differential diagnosis of PUO/FUO.10

Our result is providing current information regarding the occurrence of rickettsial infection in our area. Our hospital caters large rural as well as urban population and hence further study can be done to assess the demographic distribution of various species in both the areas. This will also provide an opportunity to prevent infection by effective control measures like destruction of arthropods in areas where there is high prevalence. Treatment can be initiated at an early stage leading to reduction in complications and associated mortality. This study further gives an opportunity to fight this disease unitedly by clinicians and microbiologists, to validate clinical presentation of rickettsial infection and to understand the relation between clinically suspected and laboratory confirmed cases. This study also extends to evaluate utility of serodiagnosis in our catering population and found useful in early diagnosis and treatment of these pathogens.

Spotted fever is an underdiagnosed disease in India. It should always be kept in the differential diagnosis of patients presenting with fever specially with pneumonitis, thrombocytopenia, elevation of liver enzyme, serum urea and serum creatinine.

Rapid and specific diagnostic method like ELISA can also be used for early diagnosis of spotted fever in patients with FUO. Now molecular methods are coming in a big way for the diagnosis of these diseases thereby making the confirmation simpler in future. An early empiric therapy can be given to reduce serious complication and mortality.

General health education and public awareness about the disease, including the methods of transmission, is necessary for their prevention and control. As this study had small sample size large scale studies are needed to understand the magnitude of rickettsial infection, in this region and other parts of India