Chand, Goyal, and Naruka: Prevalence of uropathogens among diabetic patients and their antibiogram at government medical college, Kota

Prevalence of uropathogens among diabetic patients and their antibiogram at government medical college, Kota

Aims & Objectives: The study was aimed to determine the prevalence of UTI in diabetic patient and antimicrobial sensitivity of causative agents for early treatment to reduce morbidity and mortality.

Results: Urine samples were taken from 100 proved diabetic patients attending Diabetic Clinic at NMCH, Kota and were subjected to culture and antibiotic susceptibility during September 2018 to August 2019. The overall prevalence of UTI in diabetics was (36%) with female predominance of (38.46 %) and in male with (31.42%). The UTI was common in age group between 20-40 years. E. coli (52.70%) was the most predominant bacterial isolate followed by Klebsiella (19.44%), Pseudomonas (08.33%), Enterococcus (08.33%), Staph. aureus (05.55%), Proteus mirabilis (02.77%) and CONS (02.77%). The most sensitive drug in our study was Imipenem followed by Amikacin for gram negative isolates. All the gram positive isolates were sensitive to Linezolid.

Conclusion: This study provides a baseline data of current scenario of UTI in diabetic patient in our set up which can be utilized to formulate infection control strategies. An on-going study would be beneficial to maintain a track of the UTI prevalence in diabetic patients.

Diabetes Mellitus has a number of effects on genitourinary system. Patients with diabetes are at increased risk for Urinary tract infection.1, 2 Urinary Tract Infection is more common in diabetes because of a combination of host and local risk factors. Under some circumstances urine may be inhibitory or even bactericidal against uropathogens. Modification of chemical composition of urine in diabetes mellitus can alter the ability of urine and support the growth of microorganisms. Autonomic neuropathy in diabetes mellitus impairs bladder emptying and subsequent urological manipulation predispose to Urinary Tract Infections.3, 4, 5

E. coli is the most common bacterial pathogen causing urinary infection in patients with diabetes, other organisms being Klebsiella pneumoniae and Proteus mirabilis.6 Pseudomonas aeruginosa should be suspected if there is a history of recent instrumentation or Hospitalization.

A total of 100 diabetic patients were studied for a period of one year. Clean voided midstream urine samples were collected in sterile containers after giving proper instructions and samples were processed in the laboratory within 2 hours of collection. Urine cultures were done by inoculating urine samples on blood agar and MacConkey agar plates using a calibrated loop (0.001ml) and incubated at 37 C for18-24 hours. Those culture reports were considered positive who had colony forming units more than 105 /ml of voided urine The pathogens were isolated and biochemical tests were done for identifying the species of the pathogens.7 Antimicrobial sensitivity testing for isolates was carried out by Kirby Bauer disc diffusion method on Muller Hinton agar. Results were interpreted in accordance with central laboratory standards institute guide-lines.8 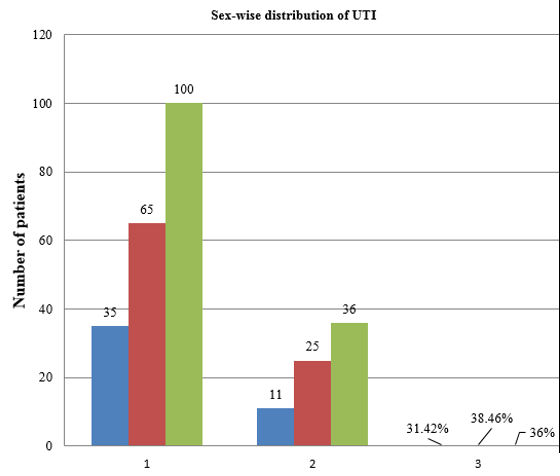 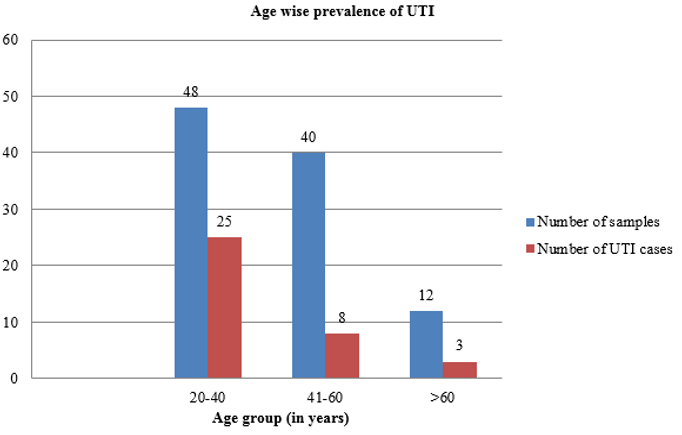 Distribution of isolates in UTI cases 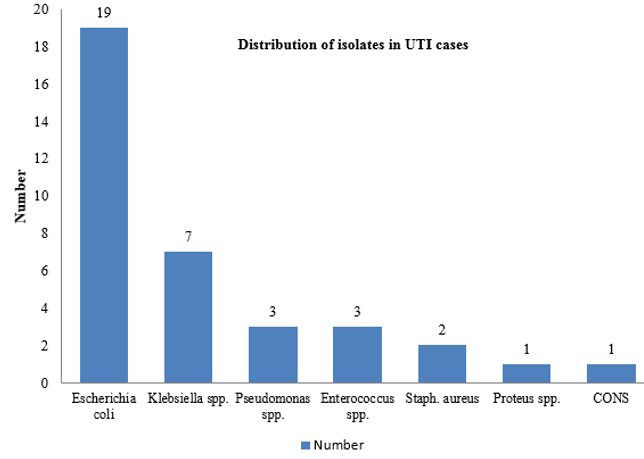 The most sensitive drug in our study was Imipenem followed by Amikacin for gram negative isolates. All the gram positive isolates were senstitive to Linezolid.

In our study the overall UTI prevalence was found to be 36%, which is similar to study done by Acharya D et al9 (34.50%) and MaySewify et al10 (34.90%). and Praveen kumar et al11 (40%).Whereas study done by Hiwot Ketema et al12 (14.90%) and Worku et al13 (10.90%) showed much lower prevalence. The variation in prevalence of UTI may be due to difference in selection criteria for study population, geographical variations and difference in screening tests used.

In our study the prevalence was seen to be higher in patients belonging to 20-40 years of age group. Similar results have been reported by Khushbu et al14 and Demiss et al.15 This may be explained by the fact that this age group is sexually active which makes them more susceptible for UTI.

The isolation of Escherichia coli as a primary uropathogen might be explained by its high affinity to adhere in the uroepithelial cells compared with other organisms, due to the presence of different viriulence factors.

In our study the most frequenly isolated gram positive organism was Enterococcus spp.(08.33%). It was 100.00% sensitive for Linezolid, Ciprofloxacin and Gentamicin. All Enterococcus spp. isolates were resistant to Cefotaxim.

The extent of antimicrobial susceptibility of various bacterial strains depends on the therapeutic practice in the particular region.

This study provides a baseline data of current scenario of UTI in diabetic patients in our set up which can be utilized to formulate infection control strategies. An on-going study would be beneficial to maintain a track of the UTI prevalence in diabetic patients.