Nontuberculous Mycobacteria (NTM) are diverse group of mycobacteria that are isolated from birds, animals & from environmental sources, such as soil & water. They are opportunistic pathogens occasionally associated with human infection.1

31 years old married female, a known case of rheumatoid arthritis presented with multiple pus-filled lesions, sinuses along with multiple painful firm raised lesions over abdomen, breast and back since past 6 months (Figure 1, Figure 2). On examination it was noted that there were erythematous hyper pigmented tender papules & plaques with atrophic scarring. Induration of sinuses & few pustules were also present. After clinical examination a differential diagnosis of skin TB & actinomycosis was considered. We received skin biopsy specimen for bacteriological, mycobacteriological and fungal workup in laboratory and part of biopsy was also sent to histopathology. On routine culture & sensitivity no organism was isolated.

The strain was identified as Mycobacterium abscessus on MALDI-TOF. Then the same strain subjected to Antibiotic susceptibility testing (AST). AST was done by Sensititre broth micro dilution method. Mycobacterium abscessus was sensitive to Cotrimoxazole, Amikacin, Tigecycline, Clarithromycin, Linezolid & Tobramycin. It was intermediate sensitive to Moxifloxacin, Cefoxitin, Doxycycline & Amoxicillin- clavulanic acid. It was found resistant to Ciprofloxacin and Minocycline. It took 6-7 days for identification of species and 15 days for AST. So, after identification and AST patient shifted from AKT to the sensitive drugs. After 10 days of treatment all skin lesions were subsided (Figure 5, Figure 6). 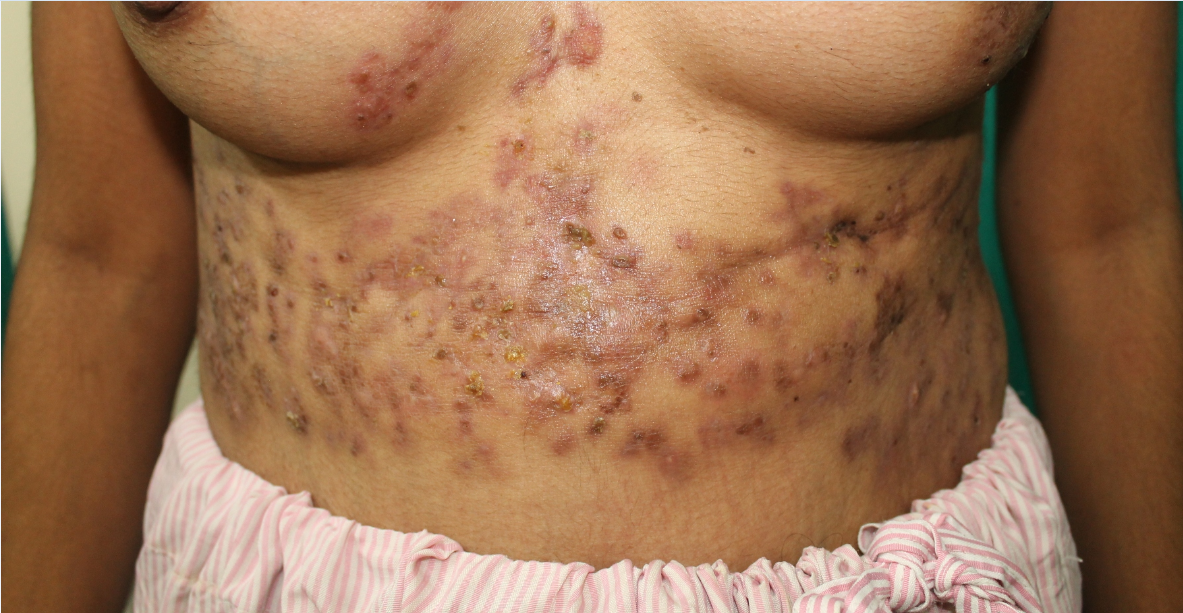 Multiple discharging sinuses over back. 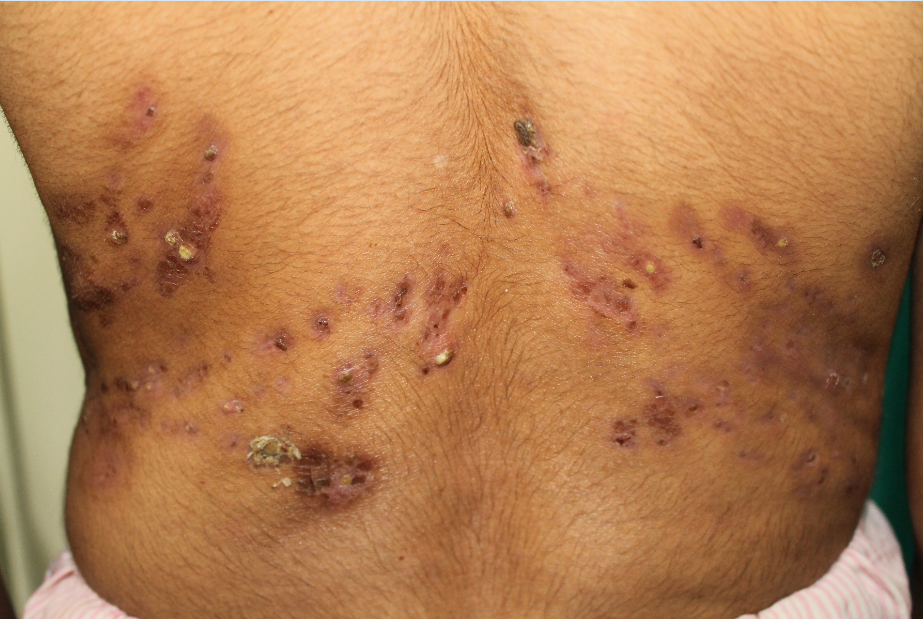 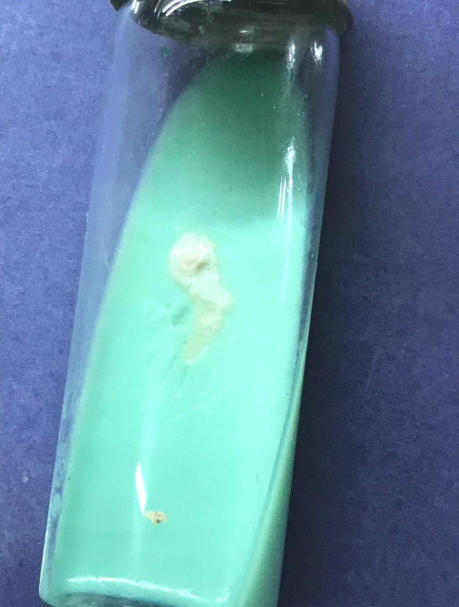 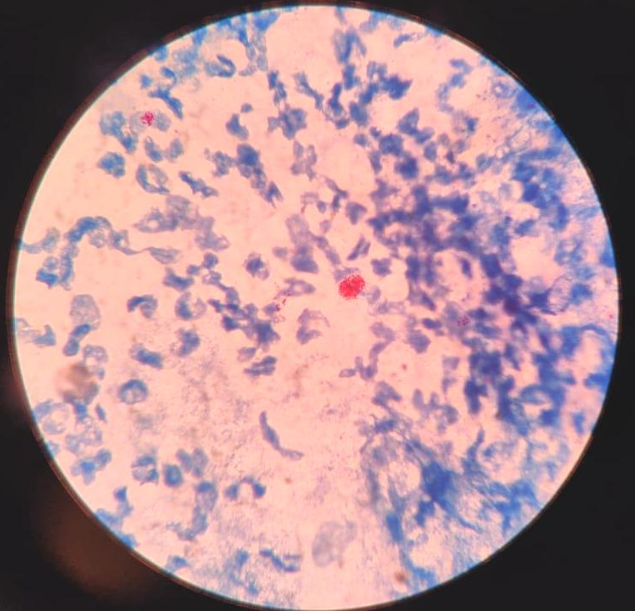 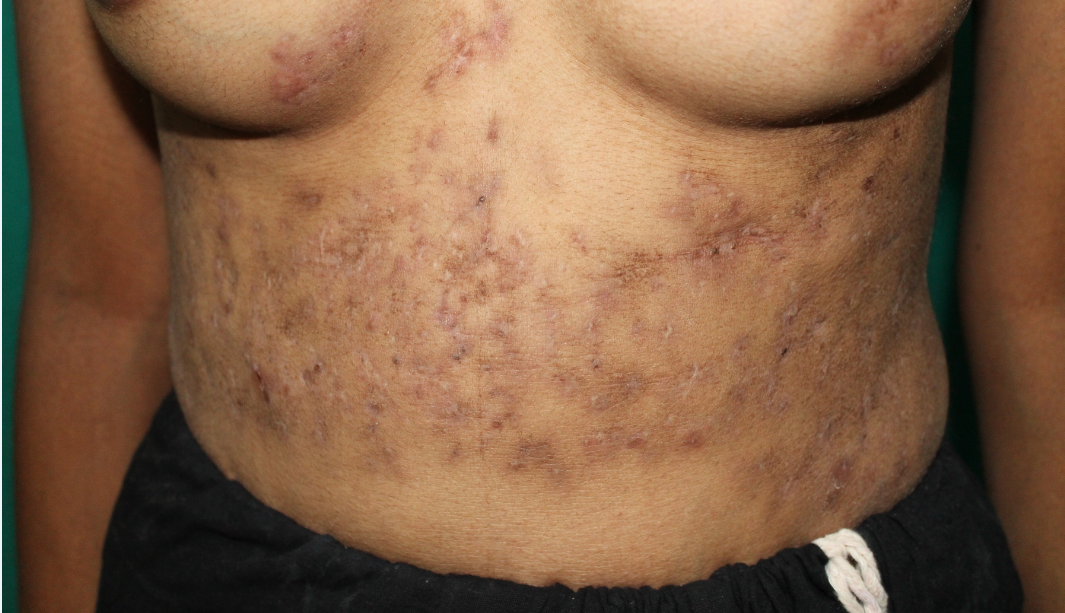 Subsided skin lesions over back 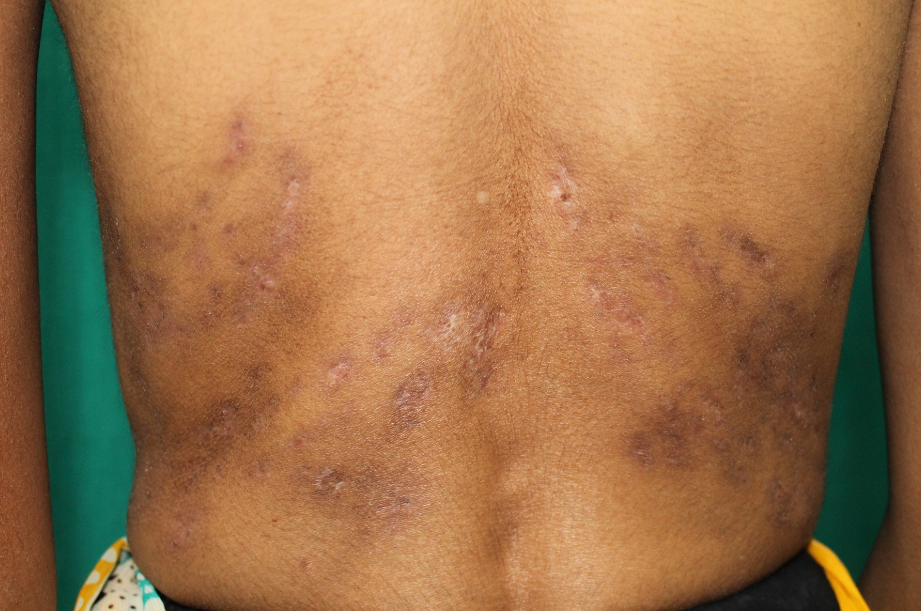 According to Runyoun’s classification M. abscessus complex belongs to rapid growing atypical mycobacteria. Other rapid growers are M. Chelonae and M. Fortuitum. M. abscessus was first isolated from a knee abscess in 1952. It had been associated with skin and soft tissue infection, pulmonary infections and hospital acquired infections.5 Cutaneous infections caused by rapid growing mycobacterium typically present with tender, violaceus papules, plaques, nodules or cellulitis on the lower extremities, upper extremities, trunk and rarely on head and neck.6 In our case patient presented with multiple discharging sinuses and erythematous hyper pigmented tender papules and plaques with atrophic scarring over abdomen, breast and back. It is unusual clinical presentation seen with M. abscessus infection. In some case reports similar presentation was seen by M. chelonae infection.7

NTM are resistant to most of the first and second line ant tubercular drugs. So differentiation of NTM from M. tuberculosis is essential. Among all NTM M. abscessus subspecies abscessus is more resistant to antimicrobial agents so species identification is important.1 M. abscessus is an emerging pathogen and cannot be treated with typical antimicrobials like macrolides, fluoroquinolones, aminoglycosides, cefoxitin, imipenem, sulfamethoxazole and tetracyclines (other than tigecycline) without performing AST.8, 9 M.abscessus isolated from this patient was sensitive to Cotrimoxazole, Amikacin, Tigecycline, Clarithromycin, Linezolid & Tobramycin. It was intermediate sensitive to Moxifloxacin, Cefoxitin, Doxycycline & Amoxicillin- clavulanic acid. It was found resistant to Ciprofloxacin and Minocycline. So patient was given clarithromycin, amikacin and cotrimoxazole as per AST report and her lesions were subsided.

Among all NTM it is mandatory to identify up to species level and perform AST, as M. abscessus is resistant to typical antimicrobials.