Anjum, Mustafa, and Khaleel: Chromobacterium violaceum: A report of two cases of septicaemia and wound infection

Chromobacterium violaceum: A report of two cases of septicaemia and wound infection

Background: Chromobacterium violaceum is a rare cause of human infection, which may become life threatening to its’ ability to rapidly disseminate. Cases are few and far between but with the climate change can increase in number. Here we discuss two (2) cases of infection with C. violaceum isolated at our hospital in South India.

Materials and Methods: Samples collected with all aseptic precautions were subjected for aerobic culture and the isolates subjected to various biochemical tests for identification.

Result: Infection by C. violaceum was confirmed in both the cases and appropriate antimicrobial administered.

Conclusion: Timely treatment with appropriate antimicrobial agents can reduce morbidity and prevent mortality by halting the progression of a local infection to systemic disease.

Chromobacterium violaceum is a gram-negative, oxidase positive, motile bacillus. It’s a natural inhabitant of soil and aquatic bodies of tropic and subtropical regions.

Human pathogenicity is rare with only >150 cases reported from around the world.3 The last case from India was reported in 2017 by Tiwari et al.4 Usually bloodstream infection is preceded by skin infection. C. violaceum septicaemia is highly fatal if not treated promptly. Relapses following therapy are also fairly common.5

A 50 year old female patient was brought to the emergency department with signs of right hemiparesis. On examination patient was drowsy, irritable, not responding to verbal commands.

She was febrile on admission with Pulse Rate of 105 bpm and Blood Pressure measuring 170/100 mmHg and SPO2 concentration at 97%. She was a known hypertensive, non-diabetic, non-smoker, non-alcoholic.

On further examination it was observed that the patient had multiple papulopustular lesions on her back.

With the ethical clearance obtained from our Institutional Review Board and Ethics Committee, the patient was subjected to complete examination.

10 ml of blood was collected aseptically via fresh venepuncture and inoculated into BACTEC blood culture bottle and incubated at 37°C, aerobically for 24 hours following which subcultures were made onto Nutrient, MacConkey and Blood Agar and further incubated at 37°C under aerobic conditions for 18 hours. After this, the following colony morphology was observed:

Gram stained smears from both blood culture bottle and isolated colonies from culture plates showed similar morphology of gram negative bacilli. These were motile, catalase and oxidase positive. Thus the isolate was presumptively identified as Chromobacterium violaceum based on these findings and the characteristic pigment.

This isolate was re-isolated by repeated blood culture which ruled out the possibility of it being a contaminant. The isolate was then subjected to various biochemical tests, as shown in Table 1.

Antimicrobial susceptibility testing was carried out via Kirby-Bauer disk diffusion method on Muller Hinton Agar. As CLSI guidelines for C. violaceum are not established owing to its rare implication in human infection, the results were interpreted according to the CLSI 2020 guidelines for non-fermenters, shown here in Table 2.

A 37 year old male patient came to surgical department with history of fall from bike after which the wound was cleaned and dressed at a local clinic. The patient was non-diabetic, non-hypertensive. On Day 3 he developed pus for which he came to our hospital. Wound swab was collected and subjected to microscopy and culture. Direct Gram’s stain showed Gram-negative bacilli.

With the ethical clearance obtained from our Institutional Review Board and Ethics Committee, the patient was subjected to complete examination.

On inoculation onto Nutrient, MacConkey and Blood agar the following colony morphology was observed:

Gram’s staining, motility and biochemical reactions lead identification of the isolate as Chromobacterium violaceum. The antimicrobial susceptibility pattern was observed as tabulated in Table 4.

The patient recovered without any complications after administration of antibiotics.

Antimicrobial Susceptibility Pattern of the Isolate

Antimicrobial Susceptibility Pattern of the Isolate

Papulopustular Lesions over the Back Seen in Case 1. 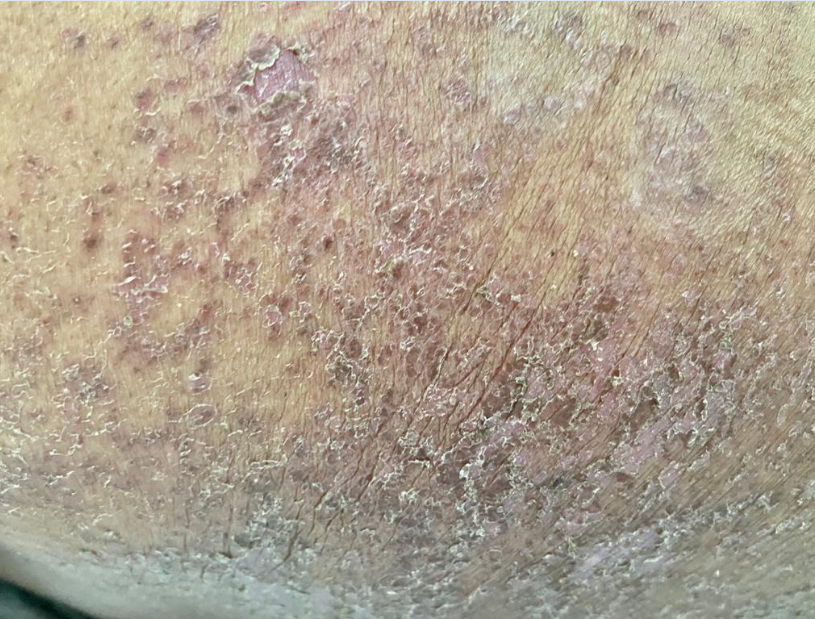 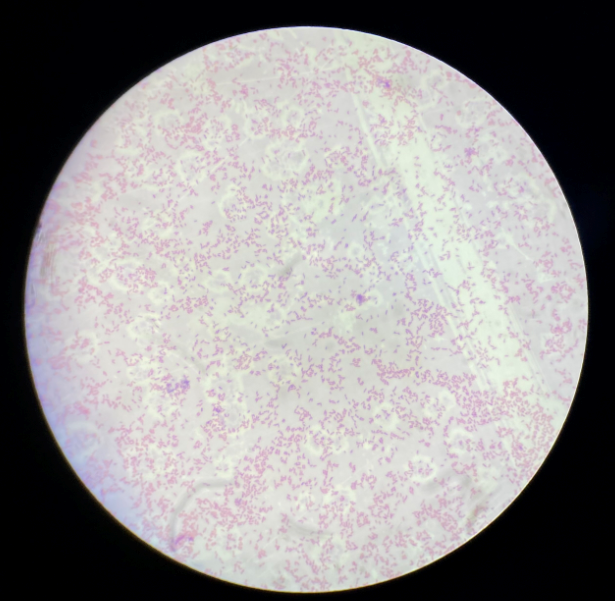 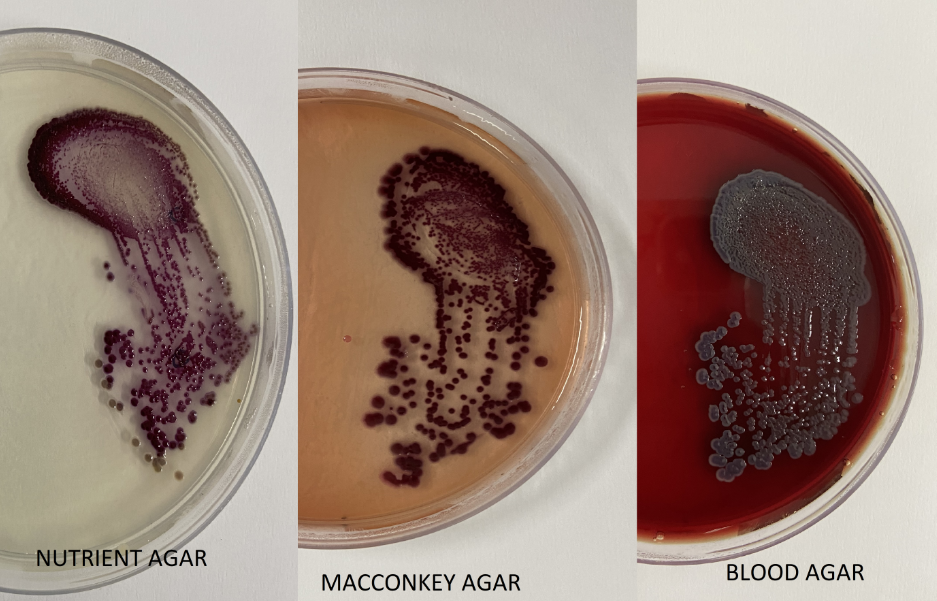 Wound Swab Being Collected From Site of Injury in Case 2 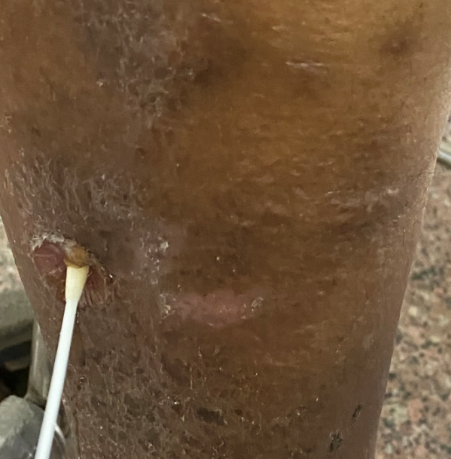 Violacein is a secondary metabolite produced by C. violaceum whose production is regulated by quorum sensing mechanism, and hence this bacteria is of keen interest in the field of biotechnology and microbiology research laboratories.6 Violacein is well known for its varied biological activities, it has antibiotic action against many Gram-positive bacteria including Staphylococcus aureus.5 Violacein also behaves as an anticancer agent, which have been studied against multiple cancer cell lines which include Human Colorectal adenocarcinoma (SW480, DLD1) 7, Human Choroidal melanoma(OCM-1),8 Human Uveal melanoma (92.1),8 among others. Violacein is also inhibitory to bacterial parasites. 9

Cases have been reported worldwide 5 with maximum cases from United States(>34), followed by Australia and India (>10 each) 5 Well known in the field of biotechnology, it is rarely implicated in infectious diseases but can cause a varied spectrum of infections including urinary tract infection, skin and soft tissue infections, septicaemia, and solid organ abscess. 8, 10 Case reports reporting chronic granulomatosis, osteomyelitis, cellulitis, periorbital and ocular infections have also been published. 11, 12, 13

C. violaceum septicaemia is highly fatal due to its ability to spread rapidly owing to the presence of one polar and one or two subpolar or lateral flagella11 and secretion of an extracellular protein collagenase. 14 Fatality as high as 65% has been reported. 5 Nearly all cases of septicaemia are preceded by wound infection, as also seen in our case. C. violaceum can form abscesses in various organs like kidney, spleen, liver, etc. Hidden micro-abscess or septic foci may develop in a patient’s internal organs which may lead to relapses. Therefore, it is necessary to treat patients with C. violaceum infection for an extended period and maintain close follow-up. 5

Most of the strains (>90%) are pigment producers. No clarity exists on whether violacein is a major virulence determinant as non-pigmented strains display similar pathogenicity as the pigmented ones according to study by Kaufman S.C. 15 Tiwari at al. reported a case of non-pigmented strain of C. violaceum causing neonatal septicaemia. 4

Immunodeficiency has been implemented as a potential risk factor owing to C. violaceum infection in patients with impaired immunity due to conditions like uncontrolled diabetes mellitus, chronic granulomatous disease, severe glucose-6-phosphate dehydrogenase deficiency, neutrophil dysfunction, and systemic lupus erythematosus. 16, 17, 18 All these conditions had been ruled out in our case reports.

Microbiologist must make clinical rounds with the treating physicians and correlate microbiology lab reports with clinical condition and share his expertise in clinching the etiological agents of infectious disease.

R B Feldman G A Stern C I Hood Chromobacterium violaceum infection of the eye. A report of two casesArch Ophthalmol19841025711714