Kumar: In silico efficacy of [S]-8-gingerol (a derivative) with 6-gingerol against PT-domain of Polyketide synthase A (PksA)

The PT-domain of Polyketide synthase A (PksA) is crucial product template that controls the aldol cyclization and aromatization to create polyketide precursor. The precursor leads to biosynthesis of aflatoxin secondary metabolites. Being carcinogenic in nature of these secondary metabolic, efforts have been made to explore novel inhibitors targeting the PT-domain of PksA. Previously, [6]-gingerol reported as a prospective inhibitor for the inhibition for aflatoxin biosynthesis, but some of its derivatives such as (S)-[8]-gingerol, 9-Hydroxy-[6]-gingerol, 9-gingerol, 5-O-methyl-[9]-gingerol, methyl-6-gingerol, and [5]-gingerol exhibited better binding affinity. Notably, Leu1508, Asn1554, and Asn1568, are the key amino acid residues that are involved in stabilizing ligand‐protein interaction. The study explores the understanding to develop new approach to create novel drug against the PT-domain to restrict the aflatoxin biosynthesis at initiation. However, a detailed in vivo study is required to further evaluation at in vivo stage.

The Polyketide synthase (PKS) belongs to a class type1fungal non-reducing, multi-domain iterative polyketide synthases (NR-PKSs). It has immense potential to produce diverse polyketide products through many condensation reactions including various mechanisms of cyclization within bacteria, fungi, and plants. Acyl-transferase (AT), acyl carrier protein (ACP), β-ketoacyl synthase (KS), product template (PT), and stater unit-ACP transacylase (SAT) domains are present with small spacer within the PKS enzyme.1 These domains are actively participated in producing verities of natural organic compounds.2 These compounds have very economical for humans and animals. Although with some pharmaceutical roles, others have some detrimental ill effects on living organisms. Among them, the PT-domain involves controlling specific aldol cyclization and aromatization for producing functionally mature polyketide precursors. The polyketide compounds lead to the formation of carcinogenic aflatoxins. They are from the furocoumarin cyclo-pentenone series and are colourless in physical appearance.3, 4 They frequently contaminate agricultural commodities in both pre- and post-harvest conditions with mycotoxins. These are the highly studied secondary metabolites produced by popular aflatoxigenic fungi i.e. Aspergillus flavus and A. parasiticus. The polyketide synthase A (Pks-A) in known aflatoxigenic fungi, well involves initiating aflatoxin biosynthesis after combines with a hexanoyl starter unit and, seven malonyl-CoA extender units to create the first stable norsolorinic acid (NOR), that later leads to a series of highly organized oxidation-reduction reactions the formation of aflatoxin. To restrict the biosynthesis of aflatoxins many alkaloids, flavonoids and efficient lowered molecular weight are present in our nature. Ginger (Zingiber ofﬁcinale Roscoe) one of our Indian herbaceous perennial plant that possesses many phenolic compounds like [6]-gingerol, [6]-shgaol, paradol, zingerone, zingiberene, etc. [6]-gingerol and [6]-shgaol has already proven to be the best compounds to inhibit the production of aflatoxin B1.5 Many derivatives of -gingerol are also come up with some anti-microbial behavior.6

Before molecular docking, conserved domain in PksA (3HRQ.pdb) was annotated by using public resources NCBI Conserved Domain Database (CDD). The CDD showed the amino acid residues in between 1309- 1665 are well involved as a part PT-domain region. The seven active sites were found using ligand-binding site module of DSv3.5.2, 8 Out of them site1, site2, and site5 were selected for further evaluation based on the quantities of poses during protein-ligand interaction. Interestingly site1 (484) has the largest volume in comparison to site 2 (47.875) and site5 (26.625). The protein-ligand interaction was performed using LibDock. The site1 (X:-210.561, Y: -186.952, Z: -134.667) illustrated with the best site with 869 poses. Remarkably, all the amino acid residues of the target protein which were interacted with the ligand fell in the selected mode within the binding cavity for docking analysis. The docking analysis revealed that (S)-[8]-gingerol showed the best scoring molecule that effectively binds with the PT-domain.

(A) The structural view of 3HRQ.pdb—[S]-8-Gingerol and (B) protein-ligand interaction 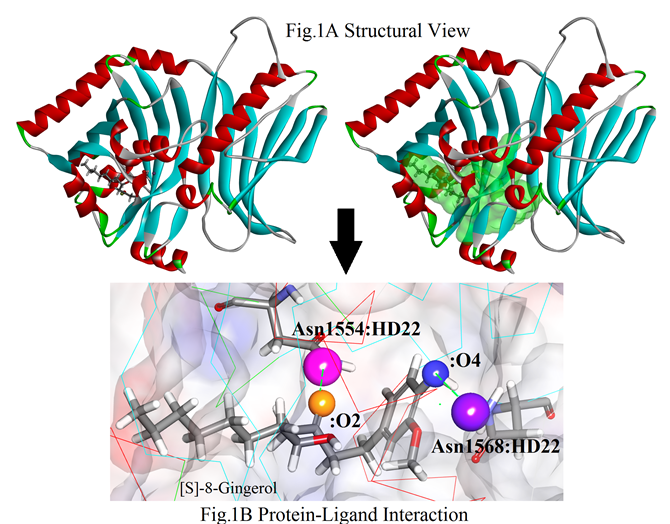 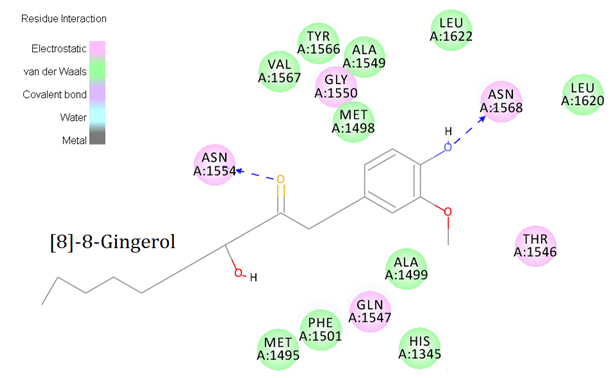 The ligands involved in protein-ligand interaction with LibDock Score, and 3-dimensional structure of ligands.

As evident that the PT-domain essential for the formation of aflatoxin biosynthesis, molecular docking was performed to predict the better inhibitor that restricts the initial mechanism. The protein-ligand interaction was performed after detecting suitable binding sites. Interestingly the site1 (484) with the largest volume became the effective region where most of the active amino acid residues are available. Docking gave 869 different poses of 6-gingerol and its derivatives ate this site cavity. Here 6-gingerol showed a strong binding affinity with a LibDock score of 152.295 (Figure 1 A). Comparatively, [S]-8-gingerol exhibited the highest docking score with 153.162 among all the ligands. Some other 6-gingerol derivatives namely 9-hydroxy-[6]-gingerol, [9]-gingerol, 5-O-methyl- [9]-gingerol, methyl-[6]-gingerol, and [5]-gingerol displayed a strong binding affinity with dock score of 150.04, 146.04, 144.04, 139.253, and 103.17 respectively (Table 1). During interaction, amino acid residue Asn1568 actively involves almost all the ligands. Here, frequently involved amino acid residues with the PT-domain are Asn1554 and Asn1568. Both residues have interacted with hydrogen bonds. The acceptor molecules on the ligand [S]-8-gingerol i.e.:O2 (orange) and :O4 (blue) strongly interacted with the receptor molecules on the amino acid residues Asn1554:H22 (pink) and Asn1568:H22 (purple) respectively (Figure.1B). Our docking result suggests that the domain binds close to the active site with similar binding energy provided during the interaction.9, 10 Also the bond length between interacted molecules in between the protein and the ligands is also mentioned in Table 2. The secondary structural view was shown the actual hydrogen bond interaction in between the amino acid residues from the PT-domain with [S]-8-gingerol (Figure 2). The results conclusively evident, that the active site residues such as Leu1508, Asn1554, and Asn1568, play a crucial role in the protein- ligand stabilization process.

In one of my previous work, the same PT-domain was docked with many antifungal ligands. 6-bigenkwanin, 5,7-dihydroxychromone, amentoflavone, ferulic acid, gallic acid6, and vanillic acid, are those which have shown its effectiveness. The highest dock score of 101.889 by 6-bigenkwanin evaluated2, but here [S]-[8]-gingerol come-up with the most effective organic molecule against the domain.

The author would like to express his gratitude towards Prof. Jainendra Kumar (Retd.), Department of Botany and Biotechnology, College of Commerce Arts and Science, Patliputra University, Patna and Dr. Ganesh C. Sahoo, Scientist ICMR-RMRIMS, Agamkuan, Patna for their kind suggestions and support in this work.