Settings and Design: The present study was conducted in the department of Microbiology in a tertiary care hospital in Hyderabad from January 2013 to June 2014, with prior approval of the Institutional Ethics Committee. The present study was designed to perform antifungal susceptibility test on Candida isolates by Disk Diffusion Method and study its susceptibility pattern.

Results: Antifungal susceptibility test shows that C. albicans is more susceptible to all the antifungal agents tested. Resistance to azole group of drugs was more pronounced in non-albicans candida spp. Voriconazole seemed to be superior to Fluconazole with a better susceptibility in the Fluconazole resistant strains also.

The Candida species are ubiquitous yeasts which are a part of normal flora of the alimentary tract of mammals and the mucocutaneous membranes of humans.1 It becomes an opportunistic pathogen as a result of one or more underlying pre-disposing factors.2 Until recently Candida albicans was the most common yeast isolated from infections. Epidemiologic data from the past decade reveal a paradigm shift in Candida infections with non -albicans Candida species such as C.glabrata, C.tropicalis, and C.krusei as emerging important pathogens.3, 4, 5, 6 This transition has had a significant clinical impact due to decreased susceptibility of these non -albicans yeasts to antifungal agents.5 Candida albicans and non-albicans species are closely related but differ from each other with respect to epidemiology, virulence characteristics, and fungal susceptibility. The Combined effects of increasing number of fungal infections, growing number of patients at risk, the increasing rate of fungal resistance, and the expanded antifungal armamentarium have led to an increased recognition of the need for standardized laboratory testing for antifungal drug susceptibility.7 Agar-based susceptibility testing methods have been focus of interest for many researchers, due to their simplicity, reproducibility and lack of requirements for specialized equipment.8 Various Indian workers9, 10, 11 used Mueller Hinton Agar supplemented with 2% Glucose and 0.5µg/ml Methylene Blue Dye for Antifungal Susceptibility testing by Disk Diffusion Method and reported an increased resistance of non –albicans Candida isolates, to Azole group of drugs. The present study was designed to perform antifungal susceptibility test on Candida isolates by Disk Diffusion Method and study its susceptibility pattern.

The present study was conducted in the department of Microbiology in a tertiary care hospital in Hyderabad from January 2013 to June 2014, with prior approval of the Institutional Ethics Committee. A total of 102 Candida isolates from different clinical samples were processed for species identification. Candida albicans was the major species isolated followed by C. tropicalis, C. parapsilosis, C. krusei, C. glabrata and C. dubliniensis. All the speciated Candida isolates were subjected to Antifungal susceptibility testing by disk diffusion method using Mueller-Hinton Agar + 2% Glucose and 0.5 μg/mL Methylene Blue Dye (GMB) Medium as per CLSI guidelines.12 Antifungal disc used: Amphotericin – B (100U), Clotrimazole (10µg), Fluconazole (25µg) and Voriconazole (1µg). 0.5 McFarland standards was used to standardize the inoculum density. C.albicans ATCC 90028 and C. parapsilosis ATCC 22019 were used as Controls. All the culture media, Antifungal disc, and control strains were obtained from Himedia Laboratories, Mumbai.

The antifungal susceptibility pattern of candida species is shown in the following table. 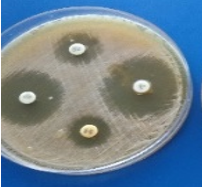 It was observed that infections with non-albicans Candida species (NAC) have shown decreased susceptibility to azole group of drugs.