Choubey: A comparative study of Widal test with blood culture in the diagnosis of typhoid fever in febrile patients

Aims: A comparative study of Widal test with blood culture in the diagnosis of typhoid fever in febrile patients.

Materials and Methods: Blood samples were collected from 62 febrile patients with symptoms clinically similar to typhoid fever and visiting red cross Hospitals at bhopal from mid May 2018 to August 2018. Blood culture was used to isolate S.typhi and S.paratyphi. Slide agglutination test and tube agglutination tests were used for the determination of antibody titer.

Results: 10 participants were females and 22 were males in blood culture and 20 were positive, 12 were negative. Total 62 cases of S. typhi were identified with the total prevalence of typhoid fever. The total number of patients who have indicative of recent infection by either of O and H antigens.

Conclusions: Total 62 cases of S. Typhi or paratyphi were identify with the total prevalence of typhoid fever.Widal test is 30 patients were observed and blood culture were observed 32 patients.

Typhoid fever is an acute illness associated with fever caused by the Salmonella enterica serotype Typhibacteria. It can also be caused by Salmonellaparatyphi.

After the ingestion of contaminated food or water, the Salmonella bacteria invade the small intestine and enter the bloodstream temporarily. The bacteria are carried by white blood cells in the liver, spleen, and bone marrow.

Typhoid fever is treated with antibiotics which kill the Salmonella bacteria. With antibiotics and supportive care, mortality has been reduced to 1%-2%. Appropriate antibiotic therapy, there is usually improvement within one to two days and recovery within seven to 10 days. For those travelling to high-risk areas, vaccines are now available.1

The incubation period is usually 1-2 weeks, and the duration of the illness is about 3-4 weeks. Symptoms include:

The culture bottles were incubated at 37°C. Incubation was continued for 7 days unless the visible growth was obtained. After each day of incubation blind subculture were done on Blood agar (BA), Chocolate agar (CA) and Mac Conkey agar (MA) up to seven days of incubation. The day of collection of sample was defined as the first day in this study.2 The identification of bacteria from isolated colonies was done by standard microbiological procedures as described in Bergey’s Manual, which involve colony morphology, Gram stain and biochemical reaction. Various biochemical media were inoculated and the results were observed on following day. 3

The study of conducted in red cross hospital at Madhya Pradesh, Bhopal from mid of May 2018 to August 2018

This study is conducted in department of microbiology on Red Cross hospital at Bhopal. Total population of patients is 62 were observed.

For the culture, a small sample of your blood, stool, urine or bone marrow is placed on a special medium that encourages the growth of bacteria. The culture is checked under a microscope for the presence of typhoid bacteria. A bone marrow culture often is the most sensitive test for A prospective study on febrile patients was conducted in which patients were screened for typhoid fever and suspected patients were enrolled in the study, then blood sample were collected and tested for confirmation of the disease.4 Patients were screened by their physician for the clinical symptom of typhoid fever which is fever of 2 or more days before admission accompanied by other clinical symptoms of typhoid fever in the absence of any other known febrile illnesses. Febrile patients whose presumptive clinical diagnosis were typhoid fever and sent to the laboratory by their physician for Widal test were included in the study. However, those febrile patients who had received antibiotic treatment for their symptom within two weeks before coming to the hospital and those who diagnosed for other known febrile illness were not included in this study. 5 By using these inclusion and exclusion criteria about 62 suspected febrile patients were recruited for this study then data and blood sample were collected from these 84 patients.

If result is positive it must be confirmed by other serological tests for Widal. 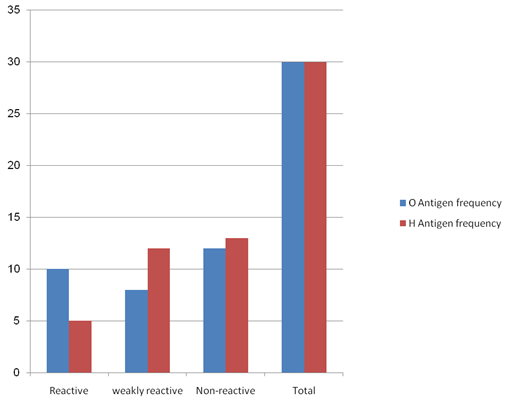 The distribution of anti TO and anti TH antibody titers, culture positive. 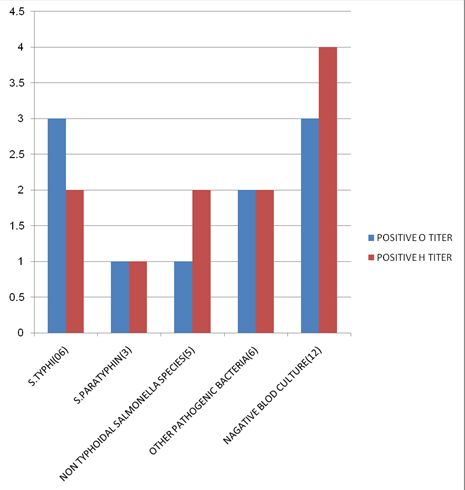 The sensitivity and specificity of Widal titer of anti TO 1:80 and higher in this study were about 71.4% and 74.1% respectively and 28.6% and 86.3% for ant TH titer of 1:160 and higher. The overall sensitivity of titer positive Widal test was about 71.4%, similar with anti TO titer because there was no only anti TH titer positive culture proven typhoid fever identified.8 This is similar with the study conducted in the endemic area of Vietnam by Olsen et al. Another study done in Kenya has shown that Widal testing done on acute phase serum of patients suspected to has typhoid fever had limited diagnostic capability given its low sensitivity in which among all typhoid cases only 26% had diagnostic titer while had O and H titer less than 1:40 With the cut off value of anti TO ≥1:80 and anti TH ≥ 1:160 Widal titer in this study, Widal test had relatively good NPV but PPV was very low Positive predictive value is more important than other measure of clinical diagnostic methods because it gives the proportion of patients with positive test results that are correctly diagnosed but it is highly affected by a prevalence of the disease.9, 10

I would also like to thank Dr. D. Vijay Kumar, H.O.D.for his support and encouragement.