Introduction: Urinary tract infection (UTI) is a common health problem across the globe. Although majority of them are bacterial in origin, there has been an increasing trend in the incidence of UTI due to the yeast like fungi, Candida. UTI due to Candida species are in large proportion noscomially acquired and of growing concern is the development of resistance to the commonly used azole group of drugs for their treatment. Since the resistance is more commonly reported among non- albicans Candida species, routine species identification and antifungal susceptibility testing is crucial for successful clinical outcomes.

Aims and Objectives: This study was conducted to analyse the distribution and risk factors associated with Urinary candidiasis and also to determine the resistance patterns of different Candida species to various antifungal agents using phenotypic methods.

Materials and Methods: A hospital based observational study was conducted from September 2016 to December 2017 on patients presenting with symptomatic UTI. Candida isolates were speciated using phenotypic methods like germ tube test and growth character on chromagar candida. Antifungal susceptibility to fluconazole, voriconazole, ketoconazole and amphotericin B were determined using disc diffusion method.

Results: A total of 101 Candida species were isolated. The incidence of Urinary candidiasis was more among females (66.4%) than in males (33.6%). People above 50 years (38.6%) were commonly affected followed by people in the age group of 21-30 years (22.7%). The incidence among hospitalized patients was 86.7% and urinary catheterization (43.5%) was the most commonly associated risk factor. The most common isolates were Candida tropicalis (31.6%) followed by Candida albicans (21.7%). The overall resistance patterns among various Candida species were 50.5%, 32.7%, 19.9% and 2% for fluconazole, ketoconazole, voriconazole and amphotericin B respectively.

Candida is yeast like fungi consisting of more than 150 species which can cause a range of infections from superficial infections to deep invasive infections. The incidence of urinary tract infections caused by Candida species has increased substantially in the recent times.1 Although community acquired urinary candidiasis is rare, nosocomial UTIs are more common. 2 Candida species can account for 9-40% of all nosocomial urinary tract infections. 3 Various factors like female gender, pregnancy, diabetes mellitus, urinary catherization, prolonged use of broad spectrum antibiotics, corticosteroid therapy and immunocompromised states have been associated with the risk of urinary candidiasis. 4

Among the pathogenic Candida species, C.albicans is the most commonly isolated species from urinary tract infections. However in the recent past many Candida non-albicans species such as C.tropicalis, C.glabrata, C.parapsilosis and C.krusei are frequently more isolated 5

Azole group of drugs such as fluconazole are commonly used in the treatment of urinary candidiasis. Unfortunately many Candida non-albicans species are increasingly becoming resistant to fluconazole. 6 Few Candida species like C. krusei are also known to be intrinsically resistant to fluconazole. 7 In view of this, routine species identification and antifungal susceptibility testing of Candida species is crucial for successful clinical outcomes.

This study was undertaken to analyse the distribution and risk factors associated with urinary candidiasis and also to determine the resistance patterns of different Candida species to various antifungal agents using phenotypic methods.

This is an observational study conducted over a period of 15 months from September 2016 to December 2017 in the department of microbiology of a rural tertiary health care centre in Puducherry. All urine samples from patients with UTI attending the hospital were included in the study. All non-repeat urine samples yielding pure growth of Candida species with more than 105 colony forming units (CFU) were included in the study. Samples which did not yield a pure growth of yeast, samples with colony count equal to or less than 104 CFU/ml and samples with growth other than Candida were excluded from the study. The institute ethics committee approval (No: SMVMCH-EC/DDO/AL/225/2016) was obtained prior to commencement of the study.

The urine samples submitted were inoculated on to Cysteine Lactose Electrolyte Deficient agar (CLED) and incubated at 37⁰C for 24-48 hours. White creamy colonies on CLED confirmed to be yeasts by Gram stain were subcultured on to Sabouraud’s dextrose agar (SDA) plates and were incubated at 37°C for 48 hours. Presumptive identification of the Candida species was done by urease test and germ tube test. Final identification of the Candida species was derived based on the growth character on Chrom agar Candida. The isolates were inoculated on HiCrome Candida Differential Agar (Himedia labs, Mumbai) and the species were identified by characteristic growth and colour after 24 to 48 hours of incubation at 37⁰C. Light green smooth colonies- C.albicans, metallic blue colonies- C.tropicalis, cream to white smooth colonies-C.glabrata, purple fuzzy colonies- C.krusei, and white creamy colonies- C.paprapsilosis.

All data were entered in Microsoft Excel and was analysed using EpiData Analysis software version 2.2.2.186. The association between various risk factors and urinary candidiasis was assessed using the chi square test and a P value less than 0.05 is considered significant. 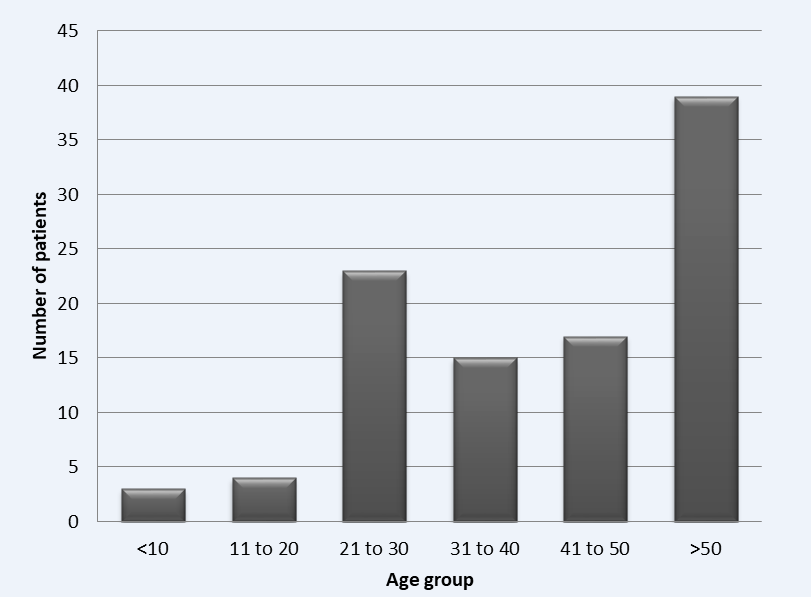 Distribution of risk factors for C.albicans and Candida non-albicans 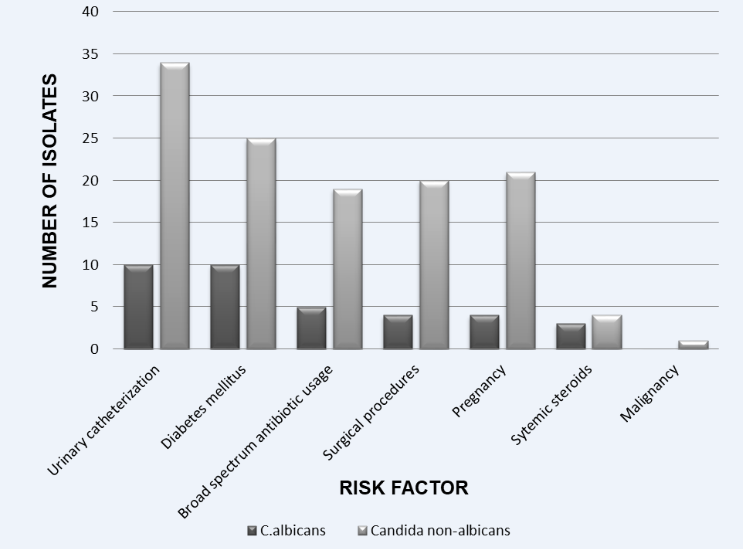 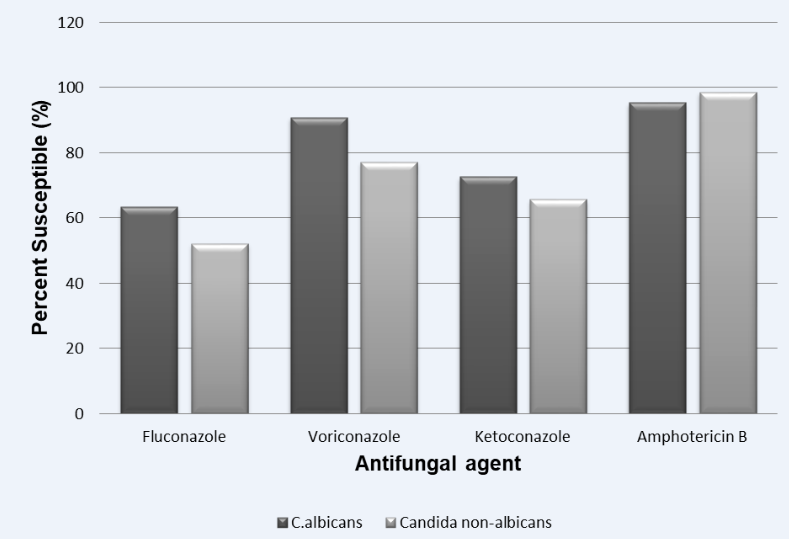 Urinary tract infections by Candida species are becoming increasingly common.10 In normal adults, yeasts are found in less than 1 % of clean voided urine samples. In this study 101 urine samples (1.45%) yielded growth of Candida species from a total of 6,930 samples. Similar Candida isolation rates (1.37%) were shown in previous studies conducted in South India.11

The prevalance of urinary candidiasis was higher among females (66.3%) when compared to males (33.6%) in this study. This is similar to the observations of N Jain et al, and N Safdar et al, where 77.4% and 77% females respectively had candiduria in their studies.12, 13 However, a few studies have reported a higher prevalance of candiduria in males compared to females. 14, 15 Urinary candidiasis was found to be more prevalent among patients over 50 years of age (38.6%) in our study. A similar observation has been recorded in previous studies. 16, 17 Urinary candidiasis was observerd in 87 (86.1%) patients who were hospitalized prior to the onset of the disease in this study. This was also observed in many previous studies where hospitalized patients are at a higher risk of contracting urinary candidiasis.18, 19

The most common risk factors for urinary candidiasis observed in this study are urinary catheterization (43.5%), diabetes mellitus (33.6%), surgical procedures (22.7%), use of broad spectrum antibiotics (22.7%), pregnancy (21.7%), use of systemic corticosteroids (6.9%) and malignancy (0.9%). Similar observations where urinary catheterisation is the predominant risk factor for urinary candidiasis is also shown in previous studies by Jain N et al, and Navin Paul et al, where the risks were were 61.8% and 66.6% respectively.12, 20

Hospitalization and urinary catheterization are the important risk factors for developing urinary candidiasis. The antifungal susceptibility varies among different Candida species and hence, identification of Candida to species level along with antifungal susceptibility testing should be practiced as a routine in all clinical mycology laboratories.