Sridhar, Gopi, Dalal, and Ravi: Comparative study of different methods of microscopy followed by a culture method in the detection of mycobacterium tuberculosis in clinically and radiologically suspected cases of pulmonary tuberculosis

Aims: To compare the sensitivity of 2 microscopic methods for the diagnosis of Mycobacterium tuberculosis (M.tb) along with culture and drug susceptibility testing to first line drugs.

Settings and design: The cross-sectional study comprises 200 suspected cases of pulmonary tuberculosis both clinically and radiologically in KIMS, Bangalore over a period of 2 years.

Key Messages: This study made us aware of the need for prompt detection, identification and appropriate treatment of Tuberculosis due to the rising incidence of MDR-TB.

Tuberculosis is a chronic granulomatous disease caused by Mycobacterium tuberculosis (M.tuberculosis) and is spread mainly by inhalational route. It has been known to mankind since ancient times and is the oldest malady of human poverty and sufferings and is a significant infectious disease in many parts of the world. Even today after the development of advanced screening, diagnostic and treatment methods for the disease, a third of the world’s population has been exposed and infected with the organism. With the advent of HIV infection, there is a resurgence of tuberculosis (TB) with more than 8 million new cases worldwide and more than 2 million dying from it.1 There is a strong relation between tuberculosis and HIV infection. HIV reactivates a latent TB infection and also makes the disease more serious and renders the treatment ineffective. TB on the other hand, quickens the development of HIV into active disease.2 Prompt detection, isolation, identification and susceptibility testing of Mycobacterium tuberculosis from a clinical specimen is essential for the appropriate management of patients with TB.

According to National Tuberculosis Elimination Program (NTEP/RNTCP) annual report, 2019, India accounts for nearly 2.7 million cases of TB out of a global incidence of 10 million3 and it is estimated that about 40% of the Indian population is infected with TB.

Detection of acid fast bacillus (AFB) in sputum samples constitutes the mainstay of diagnosis of this disease. However, this method has little value in those who don’t expectorate significant amount of sputum spontaneously (may be smear negative TB). This problem, the low bacillary load, can be overcome by using culture methods, which are the gold standards for TB diagnosis. Various other samples can be used: Bronchoalveolar lavage (BAL) or gastric lavage (in case of children).

There is a need to check the drug susceptibility of the culture isolates as there is an estimated proportion of MDR-TB in India of 3.4% in new cases and 18% in previously treated.4 Thus prompt assessment of susceptibility to drugs, helps to decrease the morbidity and mortality and prevent the spread of TB in the population.

Source of data: The study comprises suspected cases of pulmonary tuberculosis both clinically and radiologically in Kempegowda Institute of Medical Sciences (KIMS), Bangalore.

Sputum: Patient was instructed to take a deep breath, hold it momentarily and cough deeply and vigorously. Patient was also instructed to cover their mouth carefully and spit it into cup.5 2 samples were collected.

Broncho alveolar lavage fluid (BAL): 5ml of BAL was collected in a wide mouthed container and transported to the laboratory and processed within 4 hours of collection.

All samples were transmitted to the laboratory and processed as early as possible. If there was any delay, they were stored at 4*C.

Smear was prepared from the purulent portion of the specimen on a clean slide on an area of 2x1 cm. They were air dried, heat fixed in biosafety cabinet (2B) and subjected to ZN staining and fluorescent staining.

Ziehl neelson (ZN) staining: The smear was flooded with 1% concentrated carbol fuschin and heated from below till vapours were seen. Heating was done intermittently and slide was washed with tap water after 5 minutes. It was decolourised with 25% sulphuric acid for about 3 minutes. This procedure was repeated until the specimen became colourless. The slide was then counterstained with 0.1% methylene blue for 30 seconds and washed with tap water once again. The slide was dried in air and observed under oil immersion lens.

Fluorescent staining: The smear was stained with freshly filtered auramine-O and was left to stand for 20 minutes. It was washed with running water. Then decolourized by covering completely with acid-alcohol for 3 minutes. Smear was washed and counterstained with 0.1% potassium permanganate for 1 minute, washed with water. Smears were dried and observed under high power magnification (40X).

According to the NTEP (RNTCP) guidelines, The smears were graded as follows:

Staining after concentration of specimen: from the sediment, a thick smear was made, air dried and subjected to ZN and fluorescent staining.

The protocol that is followed was that of Ruhi Bunger et al. 7

Detection of positive growth: The MICRO-MGIT system signals a tube positive for growth with an indicator green light showing the reading of 15 or higher. At this point, the tube was removed and scanned outside the instrument. The tube was observed visually for the growth of the M.tuberculosis complex that settles at the bottom of the tube- it appears granular and not very turbid unlike the contaminating bacteria which appear to be less granular and more turbid.

Growth can be confirmed by two methods:

This antigen is secreted from tuberculosis bacteria and can help differentiate Mycobacterium tuberculosis complex from non-tubercular mycobacteria. It is based on the principle of antigen antibody reaction.

The kit contains lyophilized vials of each of the drugs which is later reconstituted with sterile water/distilled water.

Analysis: Data was entered in Microsoft excel and descriptive statistics like proportion, mean and standard deviation and Informational statistics like the chi-square test and the T-test were used.

Confidentiality: The information collected during the research was protected to maintain the confidentiality of the patients.

Quality control: It was compared with a standard H37Rv Mycobacterial strain. 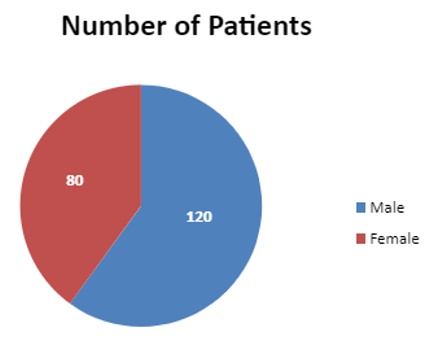 Correlation of direct smear in relation to MGIT – an observation

Correlation of direct smear in relation to MGIT– an evaluation 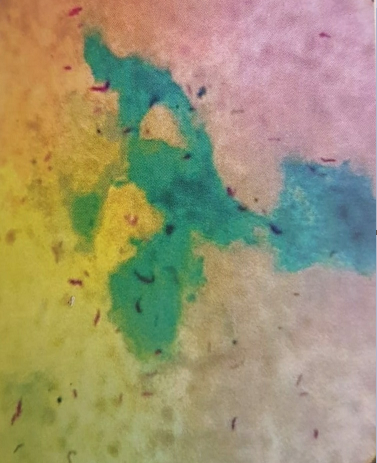 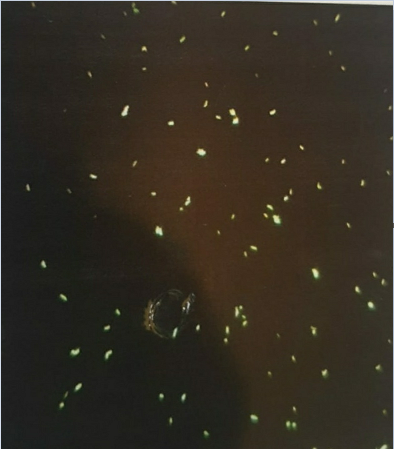 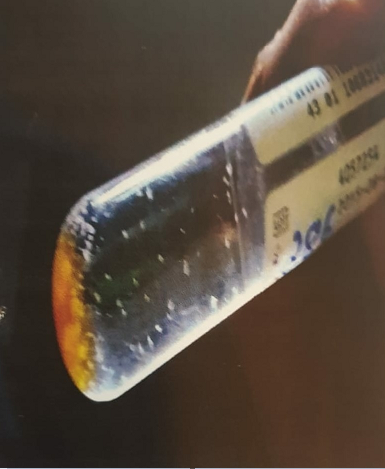 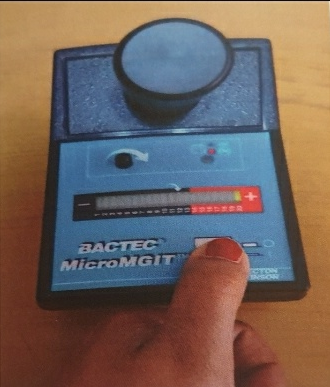 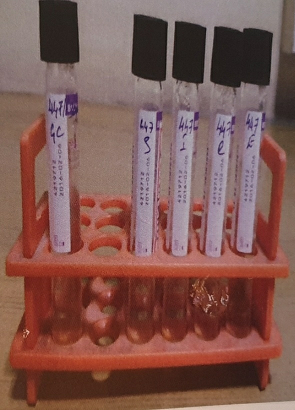 Majority of the patients in the study group belonged to the age group of 41-50 years (23%), followed by 51-60 years (22.5%) and 61-70 years (19%). The youngest patient in the study group was of age 8 years and the eldest was 80 years. The results were similar to the results obtained by Bansal R et al, where the mean (±1 SD) age of the patients studied was 49.03.8 In one study by Dhanaraj B et al, the maximum prevalence of bacteriologically positive Pulmonary tuberculosis was found in the age group of 55–64 years in male. A number of factors underlie the high and rising rates of tuberculosis seen among older adults. Increased life expectancy changes the demographic profile.9 With increased numbers of older people the proportion of both tuberculosis-related deaths and DALYs among older adults is likely to rise. But it is not only about relative numbers, older adults tend to be more vulnerable as a group than younger adults. This may be ascribed to compromised immune responses resulting from increased co-morbidity, 10 due to a range of chronic diseases (e.g. diabetes or chronic lung disease) and immunosuppressive therapy (with arthritis, organ transplants or cancer etc.) and age-related immune-senescence.

The likely reason can be because in developing countries and countries with high prevalence, due to various socioeconomic reasons, males may be the earning members and there are higher chances of them being employed in the unorganized sectors, lesser chances of awareness about diseases, differential severity in males and females and probability of completing treatment is low.13 WHO gender and health 2002.

Out of 200 cases, 18 cases (9%) were positive with Ziehl Neelsen staining and 21(10.5%) were positive by Fluorescent staining. In a study by Dzodanu et al, of the 200 samples analyzed, 71(35.5%) and 46(23.0%) were positive for pulmonary tuberculosis when Fluorescent and Ziehl Neelson stains were used, respectively. The mean reading time of Fluorescent microscopy was three times faster than the technique with very good acceptance. 14

In our study, out of 200 cases, 26 cases (14%) were found positive for Mycobacterium tuberculosis and 2 positive for non-tubercular mycobacteria and 172 cases (86%) were negative. The culture positivity reported by 2 other studies: -Akos somoskovi et al15 and Ruhi Bunger et al7 was 14% and 10.10% respectively.

In our study, there were 2 cases of MDR-TB.

EG Dzodanu J Afrifa DO Acheampong I Dadzie Diagnostic Yield of Fluorescence and Ziehl-Neelsen Staining Techniques in the Diagnosis of Pulmonary Tuberculosis: A Comparative Study in a District Health FacilityTuberc Res Treat2019201910.1155/2019/4091937