Aim and objective: The main objective of this study was to isolates candida albicans and Non- albicans candida and their antifungal susceptibility testing.

Materials and Methods: The study was carried out in the Department of Microbiology, in Tmu Hospital Moradabad. Total numbers of 806 clinical samples were processed in which 206 isolates were taken for candida. Isolation and antifungal susceptibility testing done by Vitek-2 system.

Conclusion: Infection caused by NAC species have increased. C.tropicalis was the most common isolated species. Candida albicans, C.glabrata and C.krusei were shown high susceptibility to fluconazole and voriconazole. Amphotericin B, Caspofungin, Micafungin and Flucytosine shows high susceptibility towards other candida species.

Nosocomial infection are concerned more with medical device leading to dreadful consequences like systemic infection that could be life taking, also complicated by destruction of internal tissue.2 Mortality rate is 50% in patients of blood stream infection.3

Even though researchers have pointed out that Candida might be causative factor for mucositis of digestive tract, part played by catheter in patients with unusal lower number of neutrophils is still not understood in comparison to patients of intensive care unit (ICU).5

The cases of infection caused by Candida albicans have been reduced in number but rate of Non-albicans species have been increased.6

The study was carried out in the Department of Microbiology, in Tmu Hospital Moradabad.

Total numbers of 806 clinical samples were processed in which 206 isolates were taken for candida. Sample was collected from various ICU’s and various other clinical departments of the hospital. The different clinical specimens like blood, E.T aspirates, BAL fluid, throat swab, urine, high vaginal swab, Foley’s catheter tip and Venous catheters were taken.

Identification, speciation and antifungal susceptibility of Candida species was done by automated method.

Identification of Candida species was done by VITEK 2 with 2 YST Card & antifungal susceptibility was done with VITEK 2 AST-YSO7 Card. 8

Prepared Cassette were loaded into the filler section of instrument, after that door was closed.

The User Interface Screen was pressed and it was completed in 70seconds cycle. Blue indicator light was flashed when the filling cycle was completed. Cassette was removed from the filler section and loaded into the load section within 10 minutes. Barcodes were scanned & checked against the maintain Virtual Cassette electronic work list. Straws were cut and taped up. Finally, Cards were loaded into carousel.

The cassette wastes were discarded and it was indicated by flashing blue arrow on the instrument. The loading was completed.

The result generated as genus-level, group-level identification, while Vitek 2 AST-YSO7 Card estimates the sensitivity and resistance to Fluconazole, Voriconazole, Amphotericin B, Micafungin, Caspofungin and Flucytosine.

The samples were obtained from the patients admitted in ICU’s of Hospital. Out of 806, total 206 Candida isolate from various clinical specimen from different ward of intensive Care Unit.

Showing Sex wise distribution. The Candida infection were more in male in contrast to female. 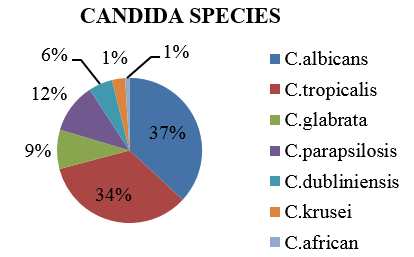 Infection caused by Candida has been increasing gradually. Candida species normally present as commensal of the human body but capable of causing opportunistic infection especially in immunocompromised individual. 10

Although, infection caused by C. albicans is very common but recently infection of NAC is increasing. NAC species are gaining importance in recent years because they show resistance to antifungal drugs. In our study, percentage of non albicans Candida (62.6%) was higher than Candida albicans (37%). Identical study was conducted by Sundaram M et al9 concluded that NAC (57%) was higher than C.albicans (43%). While in a study conducted by Lerory O et al11 C. albicans (57.0%) were isolated more as compared to Non-albicans Candida.

In our study, C.albicans showed 35%, 34%, 22% resistance to fluconazole, voriconazole and Flucytosine but showed least resistance to Micafungin 10%, Caspofungin 10% and 8% to amphotericin-b. More resistance to azole was seen in C.albicans and this was comparable to a study conducted by Rajeevan et al.15

All isolated C. krusei were resistance to fluconazole which was comparable to the study done by Mondal et al.16 C. krusei was 67% susceptible to Caspofungin, Micafungin, amphotericin-b, Flucytosine and only 33% susceptible to voriconazole.

Our study concluded that VITEK 2 was more accurate and less time consuming as comparative to conventional methods. Identification of candida species and their antifungal susceptibility are important for the treatment of immunocompromised patients and patient with serious underlying disease.

O Leory A multicentre study of antifungal strategies and outcome of Candida spp. peritonitis in intensive-care unitsClin Microbiol and Infec201017710617