Materials and Methods: A prospective study was conducted on first 100 Escherichia coli isolated from urine specimens of patients suspected to be having urinary tract infection between January 2016 and December 2016 received at Department of Microbiology, SIMS Shimoga. Fresh midstream urine samples were aseptically collected in sterile containers and plated on Blood agar & MacConkey agar plates using a standard loop technique & the growth was processed by standard bacteriological technique. Biofilm detection was done by tube and microtitre plate method. ESBL detection was done according to CLSI criteria. Antimicrobial sensitivity testing was done using Kirby-Bauer methods on Mueller-Hinton agar. Results were interpreted as per the CLSI guidelines.

Conclusion: This study showed Fosfomycin and Nitrofurantoin were the most sensitive drug. Study shows antibiotic resistance was seen more in ESBL and Biofilm producers compared to non ESBL and non biofilm producers.

Urinary tract infections (UTI) is one of most important causes of morbidity and mortality.1 Escherichia coli is most common organism causing UTI. Subsets of fecal E.coli that can enter colonize urinary tract and cause infection are known as uropathogenic Escherichia coli (UPEC).1 According to Kass concept growth of >105 organisms per millilitre from properly collected clean catch midstream urine sample indicates significant bacteriuria.2 Biofilm is a group of microorganisms encased in an exopolymer coat.3 It is considered pathogenic determinant which allows strains to persist a long time in genitourinary tract and interfere with bacterial eradication.4, 5 It causes antibiotic resistance by limitation of antibiotic diffusion through matrix, transmission of resistance genes, expression of efflux pumps, inactivation by change in concentration of metallic ions.6, 7 Extended spectrum beta lactamase constitute growing class of plasmid mediated beta lactamases. These enzymes hydrolyse oxyamino beta lactams. In gram negative pathogens beta lactamase production remains most important contributing factor for beta lactam resistance. 8

Hence the current prospective analysis of UPEC was undertaken to know their antimicrobial susceptibility pattern, detection of biofilm and ESBL production and their correlation with antibiotic resistance for the period of 1 year with UTI in a tertiary care hospitals has been undertaken.

The study was carried out in the Department of Microbiology, attached to McGann hospital, Shimoga Institute of Medical Sciences, Shimoga. The study was conducted during the period from January 2016 to December 2016 from clean catch midstream urine samples of both in-patient and out-patient departments and first 100 Escherichia coli isolates which were isolated from samples were considered for study.

Isolation and Identification of Escherichia coli

1.Phenotypic screening test for detection of ESBL production -E.coli isolates were screened for resistance to 2 Cephalosporins: Ceftazidime (30µg) and Cefotaxime (30µg) by Kirby Bauer disk diffusion test. Isolates that displayed resistance to one or both of these antibacterials were considered positive for screening test 2.Phenotypic confirmatory test for detection of ESBL production-E.coli isolates positive on screening test was further confirmed by using both Ceftazidime (30µg)/ Ceftazidime-Clavulanic acid (30µg/10µg) and Cefotaxime (30µg)/ Cefotaxime- Clavulanicacid (30µg/10µg) disks. An increase in zone diameter by ≥5mm around the disk with Cephalosporin and Clavulanic acid versus the zone around disks with Cephalosporin alone was interpreted as POSITIVE as per CLSI guidelines. On Day 3: The final identification of E.coli and their antibiotic susceptibility pattern was noted and on Day 4: Confirmatory test result for ESBL production by the E.coli isolates was noted.11

Biofilm production was estimated qualitatively for E.coli isolates by tube method as described by Christensen et al. Procedure: Glass test tube containing Brain Heart Infusion broth was inoculated with a loopful of pure culture of E.coli isolate and was incubated aerobically at a temperature of 35◦ C for a period of 2 days After incubation for 48hrs, the supernatant was discarded and the glass tube was stained by 1% safranine solution for 7 minute. The glass tube was then washed with distilled water for 3 times and dried. Result: A positive result was defined as the presence of a layer of stained material adhered to the inner walls of the tube.12, 13

Isolates were grown overnight in Brain Heart Infusion broth at 370 C.200µl of this culture suspension was used to inoculate in the wells of a sterile 96-well flat bottomed polystyrene microtitre plate. Negative control well contained broth only. The plate was covered and incubated aerobically for 24 hours at 37◦C. After 24hr of incubation, the content of each well was washed three times with 250 μl of sterile physiological saline. Then the plate was dried in inverted position. Plate was then stained for 5 min with 1% safranine. Excess stain was rinsed off by placing the plate under running tap water. The OD of each well was measured at 578 nm using ELISA reader. The cut-off optical density (ODc) for the microtitre-plate is defined as three standard deviations above the mean OD of the negative controls. For the purpose of comparative analysis of test results, the adherence capabilities of the test strains were classified into the following four categories: non-adherent (0), weakly (+), moderately (++), or strongly (+++) adherent, based upon the ODs of bacterial films. All the tests were carried three times and the results were averaged. Strains were classified as follows OD ≤ ODc -non-adherent, ODc < OD ≤ 2 x ODc- weakly adherent, 2 x ODc < OD ≤ 4 x ODc- moderately adherent,4 x ODc < OD –strongly adherent. 14, 15

The present study was conducted from January 2016 to December 2016 in Department of microbiology, attached to McGann hospital SIMS, Shimoga. First 100 E.coli which were isolated were included in the study. Out of 100 isolates 68(68%) isolates were from female patients and 32(32%) were from male patient. 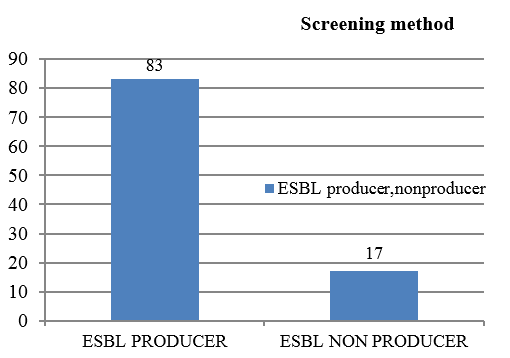 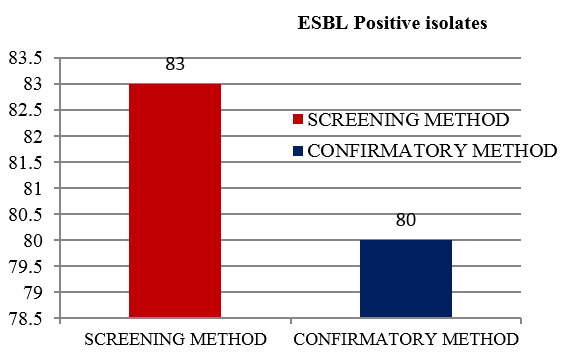 Detection of biofilm formation of UPEC isolates by different methods

Urinary tract infection (UTI) is the most common and a serious health problem both in the community and hospital settings each year worldwide.5 The ascending route infection accounts for more than 90% cases. Causative organisms are derived from fecal flora inhabiting the periurethral region. Urinary pathogens have shown a changed pattern of susceptibility to antibiotics because of biofilm formation and ESBL production resulting in an increase in resistance to commonly used antibiotics.6

According to study by Sultan et al 100% sensitivity was seen for fosfomycin, amikacin, imipenem and least sensitivity to norfloxacin (18%) and ceftriaxone (5.4%).18 Study done by V Niranjan et al showed high sensitivity for nitrofurantoin (82%), imipenem (98.9%), amikacin (82.6%).4 Study done by Mandira et al showed different results where sensitivity of nitrofurantoin (77.5%), cotrimoxazole (17.5%), gentamicin (62.5%), amikacin (72.5%) is different. Results of other studies are not in accordance with present study.19

Fosfomycin and nitrofurantoin have various advantages over other antibiotics which has led to their 100% sensitivity among UPEC isolates in our study.

Fosfomycin is broad-spectrum antibiotic and bactericidal that acts by inactivating the enzyme phosphoenolpyruvate synthetase, leading to disruption of bacterial cell-wall synthesis.18 Common side effects are diarrhea, nausea, vomiting, skin rash, heartburn, vaginitis, headache, chills and asthenia. Advantageous feature of low molecular weight and long half &#8209; life helps penetration of various tissues with ease, achieving the minimum inhibitory concentrations required to inhibit the growth of most pathogens.20

Nitrofurantoin used for the prophylaxis and treatment of uncomplicated cystitis. Increased emergence of antibiotic resistance has made nitrofurantoin a suitable for the treatment of UTI caused by multidrug-resistant pathogens. The mechanism of action requires enzymatic reduction within the bacterial cell and the reduced derivatives appear to be capable of binding to ribosomal proteins.21, 22 The fluoroquinolones susceptibility of urine pathogens, changing over the years, is influenced by factors such as the changing patient population and the extensive use and misuse of the antimicrobial agent as empirical treatment in UTI, which contribute to alterations in the microbial profile of urine isolates. 23

Use of fosfomycin and nitrofurantoin as the first line therapy contributes to a reduction in overall fluoroquinolone use thereby helping to reduce selection pressure for increased resistance to fluoroquinolones.23 In our study imipenem shows good sensitivity profile (77%). Carbapenems still remain as the antibiotic with highest sensitivity in ESBL E.coli. Doripenem is one of the newer carbapenem, which is advocated in complicated UTI. Aminoglycosides have least sensitivity according to our study. Parenteral administration and low safety profile especially among the elderly is the major drawback. This can be overcome by opting for single day dosing or by using in combination with other antimicrobial agents. 21, 23

In present study ESBL production among uropathogenic E.coli was detected in 80% of isolates. According to study done by Mandira et al 64.28% were ESBL producers. 19 Study done by Mahesh et al showed 56.2% were ESBL positive.24 According to various other studies very few UPEC isolates were ESBL producers and results are as follows: Rajani et al 39.66%, Shravani tadepalli et al 38%, Ponnuswamy et al 20.4%and Datta et al showed 21.4%.16, 25, 26, 27 These results are not in accordance with results of present study.

ESBL are mutation of various aminoacid among which mutation at position 238 wherein glycine is replaced by serine, alanine or aspartate is the most common. Mechanism of action is by structural remodelling of active site of beta-lactamases leading to hydrolysis of extended spectrum cephalosporins, all penicillins and monobactams. 16, 27

Biofilm production is high in our study compared to other studies.28 Biofilm are like intracellular pods that allow bacteria to outlast a strong host immune response to establish dormant reservoir of pathogens inside bladder cells. Re-emergence of bacteria from this reservoir causes recurrent infections. This also causes antibiotic resistance.27, 29

All the above mentioned studies show that there is increase percentage of antibiotic resistance among ESBL producers when compared to ESBL non producers. The present study also indicate that multidrug resistant ESBL isolates are widely prevalent. Multidrug resistance (MDR) due to ESBL which is a transferable drug resistance mediated via plasmids, resistance genes to other agents like fluoroquinolones, aminoglycosides and cotrimoxazole are also transferred by conjugation.26 This multidrug resistance leads to a change in the choice of empirical antimicrobial agents. Disadvantages of ESBL strains are it causes restriction of usage of beta-lactam and its usage in conditions like pregnancy where choice of antimicrobials is limited to beta-lactam antibiotics like cephalosporins ampicillin, which causes treatment failure.29

This study confirms that ESBL producing E.coli strains are notable cause of community onset infections especially in predisposed patients. This study proves statistically (p<0.01) that there is significant correlation between ESBL production and antibiotic resistance among the isolates.

Biofilm is considered pathogenic determinant which allows strains to persist for long time in urinary tract and interfere with bacterial eradication which causes recurrent infections.30 Antibiotic resistance is mainly by limitation of antibiotic diffusion through matrix, transmission of resistance genes, inactivation by change in concentration of metallic ions by the biofilm formation.27, 31 This study proves statistically (p<0.01) that there is significant correlation between biofilm production and antibiotic resistance among the UPEC isolates.

Most of the UPEC which were isolated in the study were found to be resistant to routinely used antibiotics. Data from our study shows fosfomycin and nitrofurantoin as an important treatment option for uncomplicated UTIs in the current era of increasing fluoroquinolone resistance among uropathogens. All the biofilm producers and ESBL producers which were isolated were multidrug resistant. Therefore, this is an important issue which has to be addressed by the policy makers, to formulate a strict antibiotic prescription policy.

Because the patterns of sensitivity of the microorganisms to the antibiotics vary over time and among different geographical areas, the empiric antibacterial therapy of the infections should be based on a local experience of the susceptibility and the resistance profile.