Background: Community acquired pneumonia (CAP) remains a common and serious illness despite availability of potent anti-microbials and effective vaccine. Two types of CAP are commonly recognised - typical and atypical. Typical pneumonia is usually caused by bacteria such as Streptococcus pneumoniae, Haemophilus influenzae and Moraxella catharralis, whereas, atypical pneumonia can be caused by Mycoplasma pneumoniae, Chlamydia pneumoniae, Legionella pneuomophila. Mycoplasma pneumoniae is found to be the most common cause of CAP among atypical pathogens and is called “Walking pneumonia”. It is a common atypical respiratory pathogen that produces diseases of varied severity ranging from mild upper respiratory tract infection to severe atypical pneumonia and is also responsible for producing a wide spectrum of non-pulmonary manifestations like neurological, hepatic, cardiac diseases, hemolytic anemia, polyarthritis and erythema multiforme which occur in as many as 25% of infected persons. As it lacks cell wall they are resistant to β lactam antibiotics, hence accurate and rapid diagnosis of M. pneumoniae infections is critical to initiate appropriate antibiotic treatment. Identification of M pneumoniae allows narrowing of initial empirical regimen which decreases antibiotic selection pressure and may lessen the risk of resistance. In view of this present study will be conducted in a tertiary care hospital for identification of M pneumoniae in cases of CAP by Polymerase chain reaction (PCR).

Aims: 1. To detect proportion of Mycoplasma Pneumoniae among cases of CAP. 2. Detection of 16SrRNA Mycoplasma pneumoniae by PCR.

Conclusion: PCR was found to be positive in 9 (11.68%) out of 77 CAP patients. Detection of M.pneumoniae is essential for prompt diagnosis and start of empirical therapy, thereby reducing antibiotic selection pressure.

Pneumonia is an inflammatory response of the host to uncontrolled multiplication of pathogenic organisms in the distal airways and alveoli.1 It is a common lower respiratory tract infection affecting all ages, with significant morbidity and mortality especially among the extremes of age and those with co morbid conditions.

Community-acquired pneumonia (CAP), is broadly defined as an alveolar infection developing in the outpatient setting or within 48 hours of hospitalization, whereas health care-associated pneumonia is associated with recent or current hospitalization of greater than 48 hours, or exposure to long-term care or skilled nursing facility. Two types of CAP are commonly recognized - typical and atypical. Typical pneumonia is usually caused by bacteria such as Streptococcus pneumoniae, Haemophilus influenzae and Moraxella catarralis, whereas, atypical pneumonia can be caused by Mycoplasma pneumoniae, Chlamydia pneumoniae, Legionella pneuomophila, Coxiella burnetii, and respiratory viruses (Adenovirus, Respiratory syncytial virus, Influenza A, Influenza B & Parainfluenza 1,2,3) etc. The main distinguishing characteristic that clinically separates the typical bacterial from atypical CAPs is the presence or absence of extra-pulmonary findings. 2

Pneumonia results in more than 5,00,000 hospital admissions annually in adults and ranks 6th leading cause of death in United States.3 According to WHO Statistics, Estimated death per 100,000 population in 2004 due to LRTI in India was 89.5, while it was 62.0 in the United Kingdom (UK) and 21.3 in United States of America (USA).4

Mycoplasma pneumoniae is found to be the most common cause of CAP among atypical pathogens and is called “Walking pneumonia”. It is a common atypical respiratory pathogen that produces diseases of varied severity ranging from mild upper respiratory tract infection to severe atypical pneumonia and is also responsible for producing a wide spectrum of non-pulmonary manifestations like neurological, hepatic, cardiac diseases, hemolytic anemia, polyarthritis and erythema multiforme which occur in as many as 25% of infected persons. Neurological manifestations like encephalitis and meningoencephalitis are among the most common and is life threatening also.5

One of the study conducted by Dey et al,6 found a 35% prevalence of Mycoplasma infection among patients diagnosed with community acquired pneumonia in India. M.pneumoniae is a common cause of upper and lower respiratory tract infections in persons of all ages and may be responsible for up to 40% of community-acquired pneumonias.7 Rama Chaudhry et al reported 18.6% positive results by PCR assay.8

In most studies 10-30% CAP were due to Mycoplama pneumoniae.9 As M.pneumoniae lacks cell wall they are resistant to β lactam antibiotics, hence accurate and rapid diagnosis of M. pneumoniae infections is critical to initiate appropriate antibiotic treatment. Identification of M.pneumoniae allows narrowing of initial empirical regimen which decreases antibiotic selection pressure and may lessen the risk of resistance. Reports regarding M.pneumoniae in Indian studies were less documented. As culture is laborious, expensive, time consuming and it takes longer time to collect acute and convalescent serum, Polymerase chain reaction (PCR) is more sensitive and specific for diagnosis of Mycoplasma pneumoniae.5, 9

The sample size was estimated to be 92 patients with community acquired pneumonia using nMaster software, assuming the prevalence of Mycoplasma pneumoniae among CAP patients to be 10%9- 40%7, with level of confidence as 95% and absolute precision as 10%. Standard strain of M. pneumoniae M129 was procured from ATCC, USA and it was used as positive control.8

A total of 92 clinically diagnosed Community Acquired Pneumonia cases were included in the study and data such as age, gender, date of admission, risk factors involved, underlying diseases, presenting complaints (Fever, Cough, Breathlessness, Chest pain), antibiotic therapy etc. (copy of proforma enclosed) were obtained. Clinical diagnosis of CAP and provisional diagnosis of atypical pneumonia were based on the British thoracic Society10 and the Japanese Respiratory Society guidelines repectively.11 Sputum(87) and BAL (5) samples were collected from all CAP patients as per Joint ICS/NCCP (I) Recommendations for Pneumonia and subjected to microbiological processing.12

Methods of collection of samples

On admission, specimens like sputum / Bronchoalveolar lavage were obtained before starting antibiotic therapy.

The samples were inoculated into 3ml suspension of PPLO broth & were incubated at 37°C & 5 % CO2 incubator. PPLO broths after colour change to yellow were used for genomic DNA extraction

Extraction of DNA by boiling method13

Amplification of group- and species-specific genes by PCR

A total of 92 patients admitted in the Department of General Medicine and Chest Medicine in M S Ramaiah Hospital, who satisfied the inclusion criteria, were enrolled for the study. Sputum samples were collected from all CAP patients as per Joint ICS/NCCP (I)12 recommendations and BAL fluid and were subjected to routine microbiological culture and sensitivity. Of these, 57(61.5%) were males, 35(38.04%) were females and was most commonly seen in age group of 41 to 60 years. 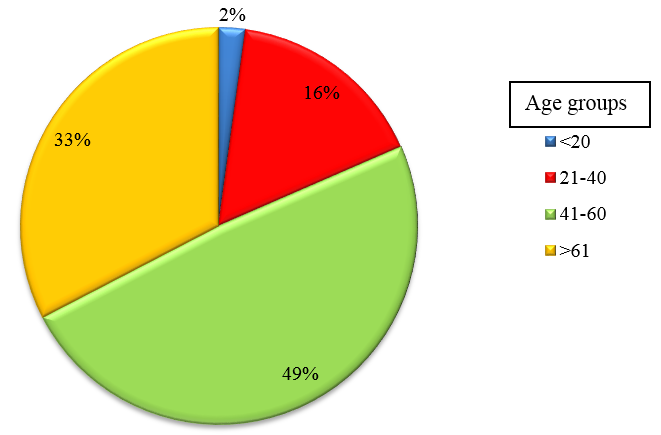 Distribution of patients in different wards 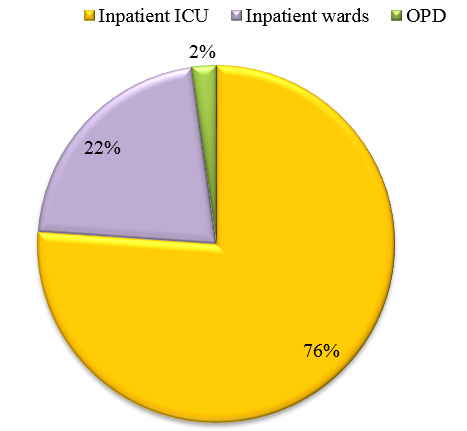 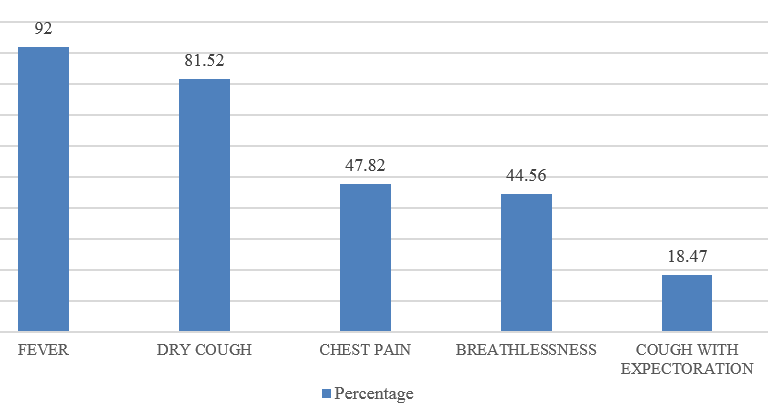 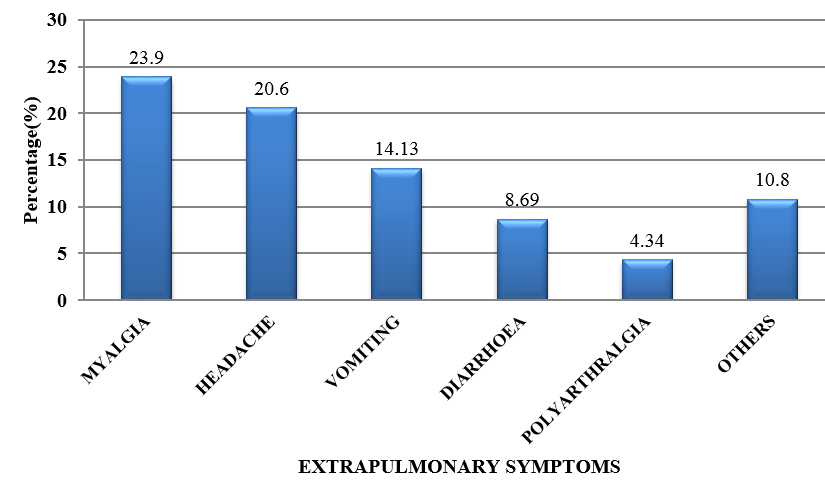 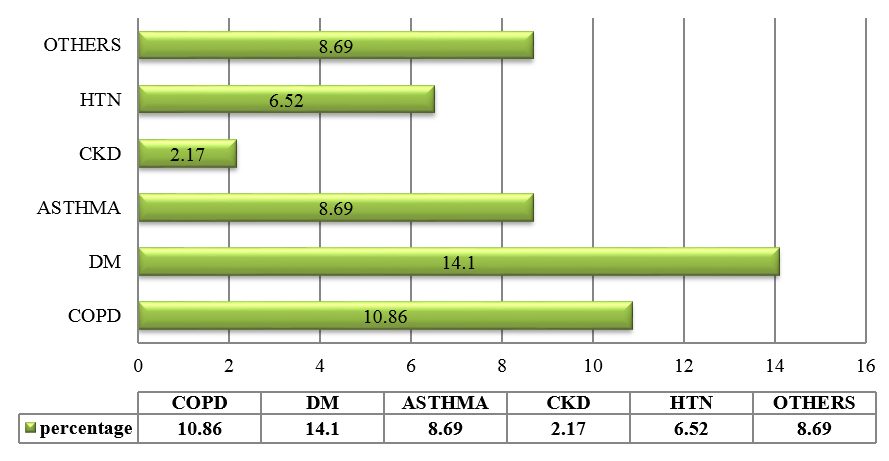 The median length of hospital stay among the 51 patients with single etiological diagnosis was four days, compared to seven days among the 16 patients with mixed infections. 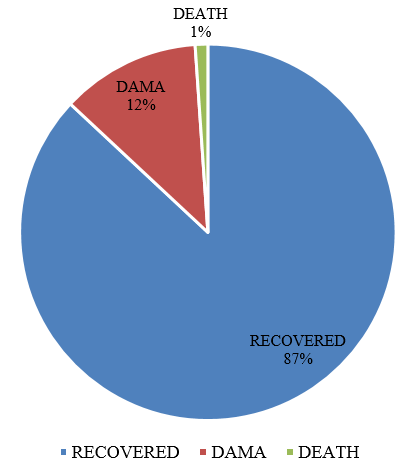 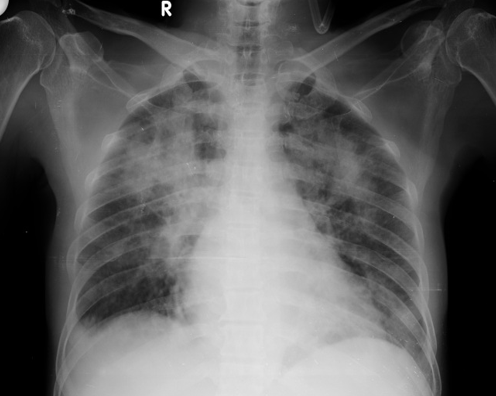 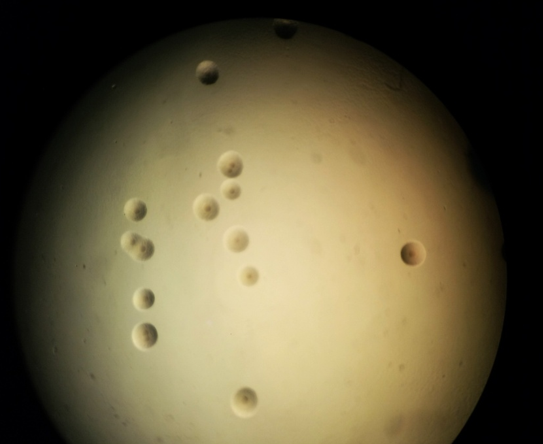 CAP is an important infectious disease not only in developing countries but also in developed countries. Establishing an etiologic diagnosis of CAP has always proved difficult, with the causative organisms often isolated in as few as 30-50% of cases, especially where the infection is due to an atypical respiratory pathogens. Although Streptococcus pneumoniae remains the bacterium most commonly implicated in CAP, the atypical respiratory pathogens like Mycoplasma pneumoniae, Legionella species and Chlamydia pneumoniae are being isolated with increasing frequency. M. pneumoniae is a common cause of ambulatory pneumonia in adults. It is an important cause of acute respiratory tract infection & is one of the potential aetiology of "atypical pneumonia". In the present study, the most common co-morbid illness associated with atypical CAP like M.pneumoniae is DM (14.1%) followed by COPD (10.86%). 3 out of 9 patients (33.33%) suffering from Mycoplasma pneumoniae had asthma as the co-existing illness. Similar study by Ngeow et al14 showed Diabetes milletus as most common co-morbid condition followed by COPD. 75 patients (81.5%) with atypical CAP had dry cough. Statistical analysis revealed that, dry cough was significantly more in atypical CAP. Myalgia (23.9%), headache (20.6%), vomiting (14.13%) and diarrhea (8.69%) were more commonly seen in the patients with atypical CAP. In a study done by Bilal et al15 in elderly patients, cough was the most common respiratory symptom noted in 37 (74%) patients, which was productive in only 29(58%) patients. Other common symptoms included dyspnea (22%), chest pain (20%), altered sensorium (16%) and gastrointestinal symptoms (8%). In this study, the quality of sputum samples were determined by Gram staining (Bartlett’s grading) and then they were cultured. Sputum culture was found to be positive for 15 out of 92 patients (16.3%) which was similar to study conducted.15 The most common organism isolated was Streptococcus pneumoniae 4(4.34%) followed by Klebsiella pneumoniae 5(5.43%) and Mycobacterium tuberculosis 6(6.52%). In elderly patients, M. pneumoniae is often not considered in the differential diagnosis of CAP on the basis of age alone. Elderly patients with CAP may have a dry, nonproductive cough with a range of causes. Moreover, Mycoplasma CAP is usually associated with fevers of less than 102°F, which is lower than with typical bacterial pneumonias or Legionella. The low-grade fevers are another reason that clinicians often assume that the patient has some sort of mild typical bacterial cause of CAP, and tests for M. pneumoniae are not ordered. In order to improve identification of patients in need of such treatment, and to avoid unnecessary antibiotic therapy, early diagnosis of Mycoplasma pneumoniae infection is essential.16 During the early phase of Mycoplasma pneumoniae disease, serological methods have low sensitivity and can often only provide a retrospective diagnosis. In contrast, PCR tests on respiratory secretions may provide an early diagnosis for Mycoplasma pneumoniae infection and could be a useful diagnostic value.17 In our study, we have analysed 92 patients, who presented to M S Ramaiah Hospital during the period of January 2016 to December 2016, satisfying the diagnosis of CAP as per British Thoracic Society Guidelines.10 Provisional diagnosis of atypical pneumonia was based on Japanese respiratory society guidelines.11 The proportion of Mycoplasma pneumoniae was found to be 11.68%, which is similar to several other studies conducted.14 The preferred treatment options for Mycoplasma pneumoniae is given below:18

This study highlights the need for active screening for CAP in all the wards and ICU setups, as the incidence of patients who are being admitted to ICU is increasing. Knowledge of proportion of atypical CAP like Mycoplasma pneumoniae will help in selection of the appropriate antibiotic for therapeutic use and a better outcome. This will also prevent indiscriminate and irrational use of antibiotics which contribute to emergence of drug resistance strains in the environment. Recent Asian guidelines support the empirical use of antibiotics for the treatment of CAP due to Mycoplasma pneumoniae,19 although local epidemiologic data on prevalent pathogens should still be considered. Clinico-microbiological correlation should be done for early diagnosis and treatment of Mycoplasma pneumoniae.

M Woodhead Community-acquired pneumonia guidelines: much guidance, but not much evidenceEur Respir J200220113

The global burden of the disease. (Accessed on : July 11, 2016)2004http://www.who.int/healthinfo/globalburdendisease/GBDreport2004updatefull.pdfAccessedon