Eye is a complex and sensitive organ and is therefore more vulnerable to trauma and various infections ocular infections are one of the most commonly encountered infections. Any part of the eye can be infected by bacteria, fungi, parasites or viruses. In order to minimize the ocular morbidity and mortality, timely antimicrobial treatment must be initiated on the basis of clinical and microbial evaluation. For specific antibacterial treatment, isolation and identification of bacterial pathogens along with antibiotic susceptibility spectrum is essential. Hence, this study was undertaken to isolate and identify the bacterial and fungal pathogens responsible for the development of ocular infections and to determine their in vitro susceptibilities to commonly used antibiotics. A total of 203 samples of suspected ocular infections comprising 117 conjunctival swabs, 34 corneal specimens, 24 lacrimal pus samples and 28 vitreous specimens were analysed. Out of them 102(50.1%) showed growth. 82(40%) were bacterial and 21(10.3%) were fungal isolates. Due to the emergence of drug resistance it is imperative that all ophthalmological samples must be tested for antibiotic resistance as far as possible. Indiscriminate use of over the counter antibiotic eye formulations should be avoided and also it is important to know the changing pattern of pathogens.

Eye is a unique organ and the most important sensory organs in the body.1 It is a complex and sensitive organ and is therefore more vulnerable to trauma and various infections Ocular infections are one of the most frequently encountered infections. Infection can occur exogenously due to penetrating injury to the eye or as a result of intraocular surgery. Infection may be acquired endogenously as a result of haematogenous spread of infection from other parts of the body. Indian population is vulnerable to ocular infections by virtue of subtropical climate, trauma and surgical procedures. Even a minor infection elsewhere in the body, can be fatal to the eye in terms of visual compromise.

Any part of eye can be infected by bacteria, fungi, parasites or viruses.2 Many opportunistic agents are frequently encountered in ocular infections due to widespread use of topical, systemic immunosup pressive agents and increasing number of patients with HIV.3 Bacteria are the predominant contributor of ocular infections worldwide. Infection can be mono or poly-microbial and is associated with various factors including contact lenses, trauma, surgery, dry eye state, chronic nasolacrimal duct obstruction and previous ocular infections.4, 5, 6

The bacterial conjunctivitis is the most common ocular infection and it involves all ages and has a worldwide distribution.7 Normally, the conjunctiva harbours a population of bacteria that does not cause any disease, but however infections may occur when the microorganisms overwhelm local host defence mechanisms.1

Mycotic keratitis is commonly seen in rural agricultural workers and has unfavourable prognosis due to its protracted course and it constitutes an important cause of blindness. Fungi gain access to the cornea due to a defect in corneal epithelium and cause tissue necrosis leading to the ulceration and subsequently corneal opacity. The predominant predisposing factors of mycotic keratitis are trauma by vegetative matter, indiscriminate use of topical corticosteroids, contact lens and rarely by retention of hair in the cornea.8 It is commonly caused by Aspergillus species, Candida albicans, Fusarium, etc.

All the patients included in the present study were examined by slit lamp bio-microscopy and the clinical conditions were diagnosed by the ophthalmologist using standard protocols. After detailed ocular examinations using standard techniques, specimens for smear and culture was obtained from the various ocular tissues. Specimens were then subjected to direct microscopic examination i.e. Gram staining, 10% KOH wet mount, Calcofluor white staining, bacterial and fungal culture. Isolated bacteria & fungi were identified by the standard Microbiological procedures.13 Antimicrobial susceptibility testing of the bacterial isolates was performed as per the latest CLSI guidelines.14

Mean age of the patients was 46.7 years with standard deviation of 15.3 (46.7±15.3). The study showed slightly more preponderance for the males (n=104, 51%). 98 patients hailed from urban and 105 from rural area. The occupational group analysis showed significantly high incidence among farmers followed by labourers, it was observed that 57% (116) of the participants were illiterate. The predisposing factors associated with suspected keratitis patients were trauma, contact lens wear and post-operative.

Out of 21 fungal isolates, 16 were from the corneal scrappings which yielded Aspergillus sp. (7), Penicillium sp. (4), Candida albicans (3) and Fusarium sp. (2). One corneal sample which yielded Candida showed the mixed growth along with Coagulase-negative staphylococcus. Among the 5 fungal isolates obtained from vitreous specimen 3 were Aspergillus sp. and 2 were Candida albicans. There was no fungal isolate obtained from conjunctival swab and lacrimal pus specimen.

Distribution of the different bacterial isolates from various specimens

Antibiotic sensitivity pattern of the gram positive isolates in percentage 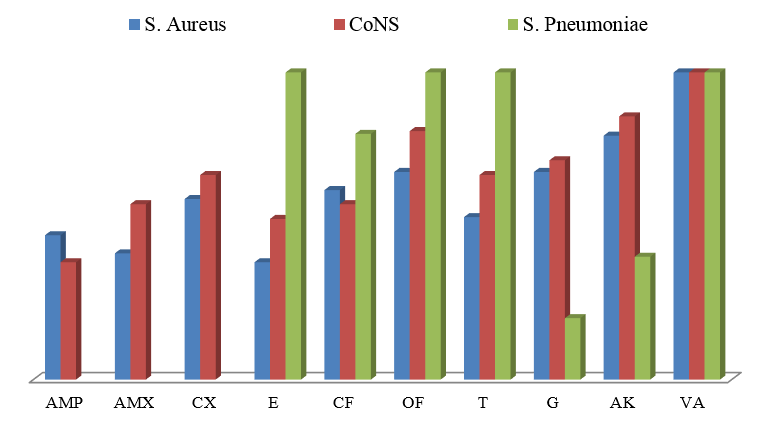 Currently, ocular infections are considered as one of the major contributors of nonfatal disabling conditions in both high and low income countries.15 Up to 5% of all the blindness may be attributed to consequences of ocular trauma and resulting infection.16 Global estimates of the ocular infections as a cause of blindness range from 1.5 to 2 million cases per year.17 In parts of the world with difficulties about the access to healthcare, poorer health indices and a higher proportion of workers within high risk occupations such as farming and agriculture, incidence of ocular infections is more.18

In our study majority of patients were from age group 41-50 with a mean age of 46.7 years and male to female ratio was 1.05:1 These results were in concurrence with the earlier reports. 19, 20 Male predominance in our study was attributed to their outdoor activities. 21 Occupational analysis indicated high prevalence rates among farmers and labourers due to their work environment. The farmers are usually exposed to trauma by some organic matter (such as dried rice stems or maize) which facilitates invasion of fungi. 22 A higher prevalence of ocular infections in rural population (52%) and illiterate individuals (57%) can be explained by lower awareness of health & hygiene practices and local medical conditions which makes them more prone to infections. 23, 24

Predisposing factors associated with suspected keratitis patients were trauma (68%), contact lens wear (12%) and post-operative cases (6%). These findings are in concordance with the study conducted by Hitesh J et al on the etiological diagnosis of microbial keratitis in a tertiary care hospital in Gujarat. 25 Among suspected endophthalmitis cases 85.7% were post-operative, 7.2% were post-traumatic and 3.5% of endogenous endophthalmitis. Similar findings were observed in study conducted at Bangalore, India by Banu A et al. 26

Sensitivity of direct microscopy for identification of fungal elements in various ocular specimens was 85.7% and it was comparable to a study conducted by Sharma et al. where the sensitivity was 81.2%. 27 So, the performance of direct microscopy in identification of fungal elements in our study were in good accordance with the various studies and it clearly establish its high diagnostic sensitivity which can be compared with culture. Moreover, culture is a time-consuming laboratory method which is not commonly available in clinical practice. Sharma et al. have recommended the introduction of anti-fungal therapy whenever a KOH+CFW+gram stained smear is positive for fungus because they believe that the gold standard of culture also has its own limitations and a fungal element is unlikely to be misinterpreted during microscopic examination.28

Coagulase Negative Staphylococci 3(60%) was the major bacterial isolate identified from corneal specimens followed by 1(20%) each of S.aureus and Pseudomonas. Similarly in another study about bacterial keratitis by Bourcier T, Coagulase negative staphylococcus was the most frequent organism isolated on corneal scrapings.33

Bacterial isolate most commonly identified among vitreous specimen was CoNS 4(40%), followed by 3(30%) S.aureus, 2(20%) Pseudomonas. This data is consistent with study done by Kodati S et al which showed Coagulase negative Staphylococci (CoNS) as the most common isolate (54.6%).34

Most common bacterial isolate observed among lacrimal pus specimens were 4(23.5%) each of S.aureus and CoNS, which correlated with study done by C.P. Shah et al from Nepal.35 Among the Gram negative organism, E.coli 2(17.6%) was the frequent isolate followed by Klebsiella pneumoniae 2(11.8%) and it correlated well with the study by Patel K et al.36

Similarly in the study by Arora U et al from India, also showed Aspergillus sp. As most commonly isolated fungi in Keratomycosis.37 In contrast to our findings studies conducted by Srinivasan M et al from South India in 1994 and Das S et al from India in 2014 had reported Fusarium as the predominant fungal isolate in Keratitis.18, 38

This is in concordance with the study conducted by Rajesh S et al in which, all Gram positive isolates were susceptible to vancomycin (100%), Staphylococcus aureus showing maximum susceptibility to aminoglycosides followed by fluroquinolones.23

Streptococcus pneumoniae isolates found to be 100% susceptible to vancomycin, erythromycin, tetracycline and ofloxacin followed by (80%) ciprofloxacin and (40%) amikacin. Similar study done by Tewelde et al in South west Ethiopia which reported the same.42

Sensitivity and resistance pattern based on in vitro testing may not truly reflect the clinical resistance and response to an antimicrobial because of the host factors and the penetration of drug.44 High resistance is usually due to overuse and empirical treatment given to the patients that ultimately leads to emergence of drug resistant strains.45, 46

Due to emergence of drug resistance it is imperative that all the ophthalmological samples must be tested for antimicrobial resistance as far as possible. Indiscriminate use of various over the counter available antibiotic eye formulations should be avoided and it is important to know the changing profile of pathogens. To mitigate the burden of ocular infections, ophthalmologist should regard on risk reduction and must comply with the etiologic approach of diagnosis.

JM Lieberman Appropriate antibiotic use and why it is important: the challenges of bacterial resistancePediatr Infect Dis J20032212114351