Introduction: Pyogenic wound infections are the one of the leading cause of morbidity and mortality worldwide. Some of the common etiological agents responsible are Staphylococcus aureus, Streptococcus pyogenes, Escherichia coli, Klebsiella app., Proteus spp., Pseudomonas spp., and Acinetobacter spp. The antimicrobial resistance has become a global challenge and the resistant pathogen poses a grave threat to the public health worldwide. Pyogenic bacteria producing biofilm has a potential to cause significant mortality and morbidity in human.

Aim: The present study was carried out to determine the bacteriological spectrum of wound infections and their antibiogram to commonly used antibiotics and to detect the biofilm production by the isolates.

Materials and Methods: This cross sectional study was carried out in the department of Microbiology, Adichunchanagiri institute of Medical sciences from September 2016 to August 2017. Two hundred and forty samples from various wounds were collected and processed as per standard procedures and biofilm production was detected by Congo red agar method.

Results: Out of 240 pus isolates, Staphylococcus species were the most commonly isolated (48.85%) followed by Pseudomonas species (11.7%). Biofilm was produced by 49.2% isolates .Majority of Gram negative bacilli were susceptible to Colistin (100%) followed by Tigecycline (Biofilm producers 75%, biofilm non producers 66.7%).All Gram positive isolates were susceptible to Vancomycin and Teicoplanin (100%) followed by Linezolid (biofilm producer 98.8%, biofilm non producer 97.8%) .

Conclusion: Routine surveillance for wound infections along with early identification and adopting efficient control protocol against biofilm forming organism plays an important role in the prevention of the most serious infections.

Pyogenic wound infections are the one of the leading cause of morbidity and mortality worldwide.1, 2 Wound sepsis rate in India is around 10-33%. Infections of the wound also contribute huge economic burden because of prolonged hospital stay.3 Upsurge of antimicrobial resistance has provided a new angle to the current problem of wound infections.4 Biofilms have enormous negative impact on health care system.5 Formation by biofilms by wound isolates impair healing of the wound, reduce host immune response and further add on to the development of antibiotic resistance as biofilms impede delivery of antibiotics, cause degradation of antibiotics, promote horizontal transfer of resistance genes 1.Biofilms complicate patient treatment.6 Data on biofilm formation by isolates is required to modify treatment modality and the outcome of clinical condition. 7 The spectrum of bacteria causing wound infections and their antibiotic susceptibility patterns exhibit geographic variability and also changing trends noted with respect to time.8, 9 Updated information regarding the bacteriological profile and their antibiogram is valuable for implementing strategies towards empiric treatment of wound infections, in adopting efficient control protocols and in formulation of suitable antibiotic policies for treatment of wound infections in the region.6, 8 With this background the present study was carried out to determine the bacteriological spectrum of wound infections and their antibiogram to commonly used antibiotics and to detect the biofilm production by the isolates.

The present cross sectional study was carried out in the department of Microbiology, Adichunchanagiri institute of Medical sciences from September 2016 to August 2017. Two hundred and forty pus samples from various wounds were collected and submitted to microbiology laboratory of the hospital and were processed as per standard procedures.10 Both inpatients and outpatients were included in the study.

Repeated isolates from the same patient and patients who were on antibiotic therapy or had history of antibiotic intake within one week prior to sample collection and anaerobic isolates were excluded from the study. Informed consent from patients and ethical clearance from the institution were obtained for the study.

Specimens were inoculated on to Blood agar and MacConkey agar plates (procured from HiMedia Mumbai India) and incubated for 48 hours at 370C under aerobic conditions. Isolates were identified by standard microbiological methods.10 Antibiotic susceptibility testing was carried out by Kirby Bauer disc diffusion method as per Clinical Laboratory Standards Institute guidelines with ATCC Staphylococcus aureus ATTCC 25923 and Escherichia coli ATCC 25922 as control strains.11, 12

Out of 240 pus isolates studied, Staphylococcus species were the most commonly isolated bacteria (48.85) followed by Pseudomonas species (11.7%) (Table 1). 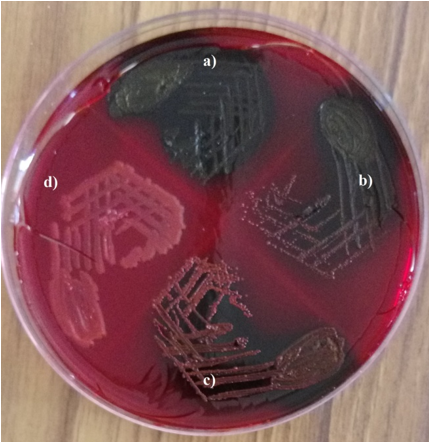 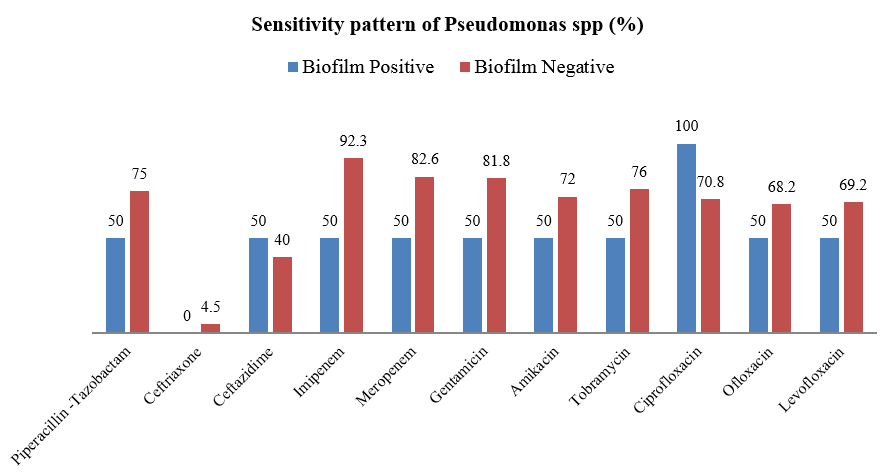 Wound infection is one of the most common and serious complication among the hospital acquired infections. Wound infection can increase the length of hospital stay and accounts for mortality rate up to 70-80%.12

In the present study, a dominance of Gram Positive bacteria as the causative agent of pyogenic lesions was seen similar to studies by Tiwari et al., Lee et al., 2009.16, 17 This is in contrast to other studies where Gram negative bacteria are most common pathogens isolated.12, 18 Staphylococcus forms the normal microbial flora of the skin and anterior nares and hence can easily contaminate the wound. 2, 5, 6

Staphylococcus aureus (48.85%) was the most common Gram positive isolate which similar to the various studies.12, 16, 17 The prevalence of MRSA (39%) reported in our study is in accordance with the studies of Kshetry et al,.(37.6%), Sanjana et al.,(37.6%), Dibah et al.,(46.3%).19, 20, 21 However, lower rates were reported by Rozina AK et al., Tiwari et al., Lee et al.,12, 16, 17. The difference in the rates of isolation of MRSA might be due to the difference in the level of irrational antibiotic use, level of hygienic condition maintained in different hospitals and effective implementation of hand hygiene program.12

Among Gram Negative bacilli, the most common isolate was Pseudomonas species (11.7%) followed by Klebsiella species (10%) and Escherichia coli (8.8%). This is in accordance with the study of Mukhopadhyay et al,.22 but is in contrast with the study of Pal K et al., where Escherichia coli was the most common Gram negative isolate.23 This inconsistency in bacterial pattern may be due to regional variation of bacterial profile, habits of the local people and also due to the fact that all the Indian studies done so far involve community set up and were not centered on hospitals.24

Antimicrobial resistance is an innate feature of bacterial biofilm that, in addition to the increasing resistance among clinical strains, may complicate patient treatment.6 In this study biofilm was produced by 49.2% of total isolates. Out of total Gram positive cocci isolated in the study, majority of biofilm production was seen among Methicillin Resistant Staphylococcus aureus isolates (48.1%), which is similar to the studies of Shrestha et al (44.9%) and Ansari et al (43.1%).25, 26

Majority of Gram negative bacilli were found sensitive to Colistin, Tigecycline, and aminoglycosides followed by Imipenem which is similar to various studies.8, 9, 27 Majority of Pseudomonas species were sensitive to ciprofloxacin followed by carbapenems and aminoglycosides, this is in accordance with Sukumar N, et al.,; Sharma V et al., and Amabegaum B et al.,8, 9, 28

Majority of Gram positive cocci were sensitive to Teicoplanin, Vancomycin and Linezolid which is in agreement with other studies. 1, 9, 29, 30

The prevalence and pattern of Antimicrobial resistance among wound isolates show variability according to geographic location, endemicity of pathogen in the locality and climate conditions.

Limitation of the Study

In this study, clinical correlation was not done. Small sample size did not allow us to conduct advanced statistical analysis, which could have potentially strengthened this study

Continuous surveillance is necessary to update the knowledge of antimicrobial susceptibility pattern of clinical isolates to provide the appropriate dose regimen and treatment schedule against pyogenic wound infections and to limit the expanding threat of drug resistance. Early identification and adopting efficient control protocol against biofilm forming organism can prevent the most serious nosocomial infections and improve the outcome of the condition.