Introduction: Dengue virus infection is becoming a major public health problem in recent decades because of the mortality and morbidity associated with it. Dengue is endemic in many parts of India and epidemics are frequently reported from various parts of India and abroad. The mortality rate in patients with dengue hemorrhagic fever (DHF) and dengue shock syndrome (DSS) is as high as 44%. Hence early and rapid laboratory diagnosis of dengue is crucial. Appropriate clinical management can save the lives of DHF and DSS patients and mortality can be reduced to less than 1%. It is also worthwhile for planning appropriate control strategies. The present communication reports the seroprevalence of dengue infections occurred in Central India.

Materials and Methods: Blood samples from 5273 suspected cases were collected from January 2016 to December 2016. Sera were separated and subjected for NS1 antigen detection testing by the solid phase immunochromatographic assay, a commercial dengue virus rapid test kit. and antidengue IgM antibody ELISA in the Department of Microbiology, VIMS, Ballari. All samples were put for ELISA.3036 samples were tested for NS1 Antigen detection rapid method.2272 samples were tested for both rapid test and ELISA.

Conclusion: Dengue cases were more during September to November in the post monsoon season which is useful to plan special preventive strategies. The study draws attention toward the male, young and adult age group. To conclude, in countries lacking infrastructure for the diagnostic labs especially in the rural and remote areas, the rapid dengue ICT tests can play a major role in diagnosis and in patient management of acute dengue infection. The rapid ICTs are very simple, easy to perform, and can be used as point of care tests. We suggest that the rapid ICT for NS1 Ag detection may be used in patients presenting with fever less than 5 days

Dengue is an arthropod borne viral illness caused by one of the 4 serotypes of the Dengue virus DEN1 – DEN 4.Dengue viruses are single stranded positive sense RNA viruses belonging to family Flaviviridae. Dengue is worldwide in distribution but more prevalent in tropical and sub-tropical regions. It is a mosquito-borne disease which affects humans mainly in tropical and subtropical regions of the world.1 The mosquitoes which are responsible for transmission of Dengue infection are Aedes aegypti and Aedes albopictus.2 According to WHO globally around 3 billion people live in areas where the risk of exposure to dengue virus is high and nearly 50 million people are infected with dengue virus every year.3, 4 Dengue infection presents clinically after an incubation period of 3-14 days as fever of sudden onset with headache, retrobulbar pain, conjunctival injection, pain in the back and limbs – break bone fever, lymphadenopathy and maculopapular rash. In serious forms, it presents with haemorrhagic manifestations potentially leading to Dengue shock syndrome. Recently a fifth serotype was identified.5 Early diagnosis plays a crucial role in detecting an epidemic or outbreak and in undertaking effective vector control measures.6

During the last half a century, the incidence of Dengue has increased by 30-fold and expanded to many new countries, and also from urban areas to rural areas. Approximately 294 million cases of inapparent Dengue infections and about 96 million of apparent Dengue infections were seen worldwide in 2010, and Asia has contributed to 70% of burden of Dengue infection. Dengue cases in India are rapidly rising every year. In 2015 as per National Vector Borne Disease Control Programme (NVBDCP) a total of 99,913 of dengue cases were detected with 220 recorded deaths.

Blood samples from 5273 suspected cases collected from January 2016 to December 2016. Sera were separated and subjected for NS1 antigen detection testing by the solid phase immune chromatographic assay, a commercial dengue virus rapid test kit by J.Mitra and anti dengue IgM MAC ELISA kit obtained from National institute of Virology, Pune in the Department of Microbiology, VIMS, Ballari. All samples were put for ELISA.3036 samples were tested for both rapid ICT for NS1 Antigen and IgM ELISA. 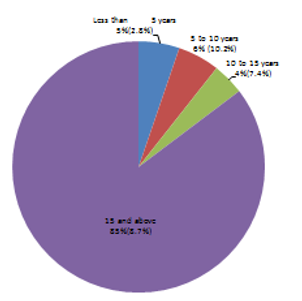 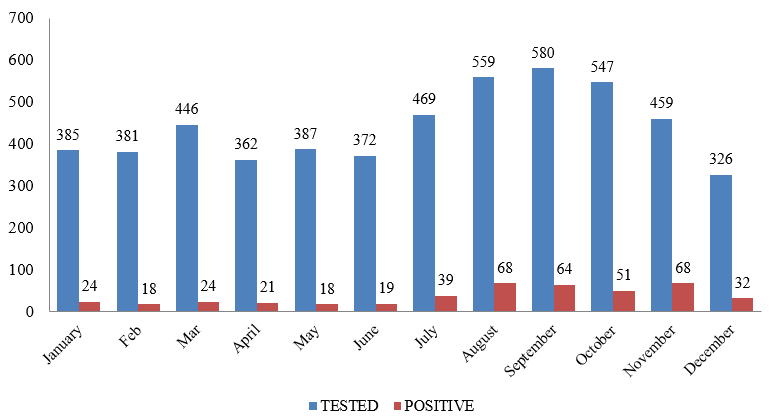 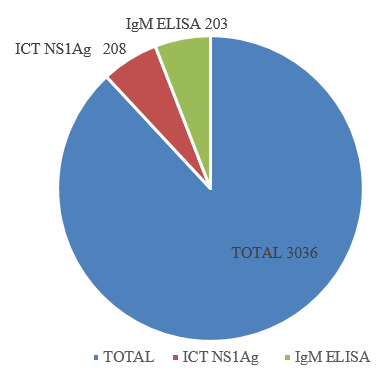 To perform ELISA test, it requires technical expertise, lab should be equipped with instruments like ELISA washer and reader which are expensive instruments. To make it cost effective for the patients, a large number of samples need to be processed at one go. In comparison to ELISA, rapid ICT needs very little technical expertise to perform, cost effective, individual test can be performed. The major advantage in Rapid ICT Antigen detection test is the turnaround time in which results are obtained within minutes in comparison to ELISA which requires few hours to get the report. Also another main advantage of the rapid ICT Antigen detection is a single sample can be run without waiting for the samples to be gathered and processed as in the case of ELISA.

In a study done by Ashwini Manoor Anand et al.,8 Of the total 112 clinically suspected dengue cases, 94 samples were dengue positive cases tested positive by one of the tests such as IgM ELISA, NS1 antigen ELISA and RT-PCR. In their study, most common age group affected was between 0-12 years of age unlike in our study where the commonest age group was 5-10yrs, followed by young adults in the age group 13-24 years but in our study it was 15yrs and above. Females were more affected compared to males with a male to female ratio of 1:1.35 in contrast to our study where males were commonly affected than females.

Manmeet Kaur Gill 10 in their study showed male to female ratio to be 2:1 and the age of Dengue positive patients was between 11- 60 years but the most common age group affected was between 19-42 years. 250 samples were taken, out of which 69 were reactive for Dengue infection by ELISA. Out of these 69 positive samples, 55 samples were reactive by rapid test. In 18 samples NS1 Ag was positive by both rapid test and ELISA, The rest of the positive samples were either positive for IgM or IgG. When rapid test was compared with ELISA test, 55 were true positives out of 250 samples and 181 were true negative. The specificity was 100%, positive predictive value was 100%. This was in concordance with our study.

A study done by Mahesh Reddy R.11 showed that out of 740 sera samples 354 were NS1 Ag ELISA positive and out of 609 sera samples, 269 were IgM antibody positive. Most of the cases who were Dengue positive either by NS1Antigen or IgM antibody were between the ages of 10-50 years of age. Among the gender distribution, male preponderance existed as was in our study. Specificity and positive predictive value of the test was 98.45 % and 98.15% respectively.

Ashwini manoor anand et al12 in their study concluded that for early diagnosis of Dengue NS1 and RT-PCR are both useful but when compared to cost, technical performance and rapidity, NS1 rapid detection was better than RT-PCR.

Dengue is a mosquito-borne disease affecting humans which has a grave consequence if timely intervention is not done. Dengue cases has got a seasonal variation with maximum number of cases the post monsoon season, during September to November. That is the time when there is water collection which becomes a breeding ground for the mosquitoes. This knowledge is useful to plan special preventive strategies so that there is a reduction of number of cases. Our study revealed that there was male preponderance in the occurance of the disease. Young children and adult age group were commonly affected. Our study showed that the rapid ICT kit for NS1 antigen detection that we used for testing performed at par with ELISA based test. Thus in developing countries like India, where there is lack of infrastructure for the diagnostic labs especially in the rural and remote areas, the rapid dengue ICT tests can play a major role in diagnosis and in patient management of acute dengue infection. The rapid ICTs are very simple, does not need technical expertise, easy to perform and the results are obtained in minutes. Thus these tests can be used as point of care tests for rapid diagnosis and timely management of the cases.

Only NS1 Antigen detection was done in our study by rapid ICT. Ig M and IgG antibodies detection by rapid ICT would be recommended.