Materials and Methods: An experimental study was carried out after obtaining waiver of consent, in a tertiary care centre. A total of 37 patients were included in the study after careful consideration of the inclusion and exclusion criteria. Gram staining report, bacteriological profile, direct susceptibility report, antimicrobial susceptibility report of all the isolates were documented. Statistical analysis was done by using IBM SPSS software.

Results: Overall prevalence of sepsis was 40.5%. Gram negative bacteria were more commonly isolated (83.8) and Escherichia coli was the commonest isolate (51.4%). The antimicrobial resistance was observed maximum for amoxicillin/clavulanic acid (66.7%), ceftriaxone (60.6%), Cefotaxime (57.6%) and least for meropenem (9.1%), imipenem (6.1%). On comparison of DST with AST among 28 gram-negative Enterobacteriaceae isolates 15 minor errors (4.8%) and three major errors (0.97%) were recorded, with maximum errors being documented for piperacillin/tazobactam with five minor errors (17.9%) and one major error (3.6%).

Conclusion: DST is an important tool for early institution of targeted therapy and should be considered as one of the step towards antibiotic stewardship intervention.

Blood stream infections (BSIs) represent an important cause of morbidity and mortality up to 20-50%.1 The routine process of evaluation of patients with BSI involves, isolation of etiological agent by blood culture and antimicrobial susceptibility testing, which provides the susceptibility report for further prompt therapeutic interventions; however, these results will be available only with a delay of 48–72 hours after sampling.2, 3 Early administration of appropriate empirical antibiotic treatment has been associated with improved survival among patients with BSIs, yet up to 30-40% of patients with BSIs get inappropriate antibiotic treatment till the availability of susceptibility report.4, 5, 6

Decision on definitive therapy, whether there is need for escalation, or de-escalation, usually depends on susceptibility report from Microbiology laboratory.7 Irrational antibiotic prescriptions may lead to immediate as well as long-term consequences such as the emergence of multidrug-resistant microorganisms and an increased risk of severe infections, morbidity and mortality; in turn leading to increased cost and prolonged hospitalization. Therefore, Microbiology laboratory should play a vital role to provide expedited reports on positive blood cultures, to guide the clinicians for antibiotic therapy, which may act as first step towards reduction of irrational use of broad spectrum antibiotics for therapy.3, 5

An experimental study, based on diagnostic method of evaluation was conducted after obtaining waiver of consent from Institute Ethics Committee (RC.NO:RC/17/07) and necessary permission from the hospital management. All aerobic BacT/ALERT positive blood cultures from clinically suspected patients with blood stream infections (BSIs), between June 2017 to August 2017, from outpatient and inpatient departments of a tertiary care hospital were included in the study. Only positive blood culture specimens with a single organism in Gram stained smear report were included in the study. Repeat isolates from the same patients, positive blood specimens with more than one organism in Gram stained smear report or which yielded more than one isolate after subculture or which yielded fastidious bacteria and yeast were excluded from the study.

The following procedures were followed on all aerobic BacT/ALERT positive blood culture specimens included in the study:

Discrepancies between reports of individual antibiotics will be analyzed as per Food and Drug Administration (FDA) criteria (Table 1):16

Out of 773 clinically suspected patients with bacteremia admitted in various wards of a tertiary care center, 74 (9.6%) were blood culture positive, during the study period. Out of these patients 37 (50%) were included for the study and the remaining were excluded from the study, as they had grown fastidious organisms, yeast and skin contaminants from positive blood cultures. Maximum patients were in the age group of 40-60 years (40.5%) and the mean age of the study population was 46.7± 18.8years. Out of total 37 patients, majority [15 (40.5%)] were clinically diagnosed to have sepsis and septic shock.

Gram staining report of the smear prepared from the positive BacT/ALERT bottles revealed 33 gram-negative rods (89.2%) and four gram-positive cocci in clusters (10.8%). Among the gram-negative bacteria, Escherichia coli was the commonest isolate (51.4%), followed by Klebsiella pneumoniae (10.8%), Aeromonas caviae (8.1), Pseudomonas aeruginosa, Salmonella Typhi and Salmonella Paratyphi A (5.4% each) and Enterobacter spp. (2.7%). Among the gram-positive bacteria, Staphylococcus aureus was isolated from four cases, of which two were methicillin resistant Staphylococcus aureus (50%).

Overall antimicrobial resistance rate among gram-negative bacterial isolates (n=33) detected by direct susceptibility testing has been shown in the Figure 1. 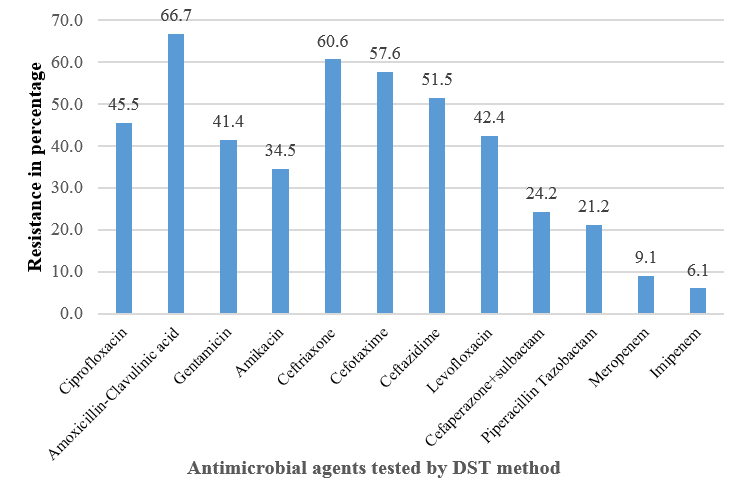 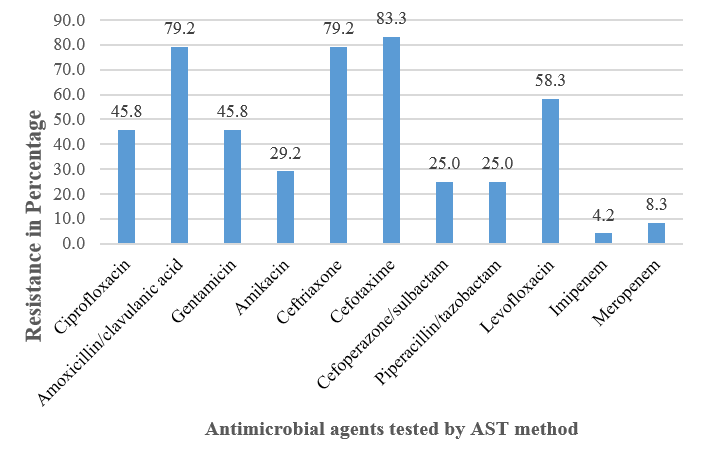 Among the non-Enterobacteriaceae isolates (n=5), overall antibiotic resistance in decreasing order was as follows: cefotaxime (83.3%), ciprofloxacin and ceftazidime (40% each), cefoperazone/sulbactam, amikacin, levofloxacin, meropenem and imipenem (20% each), and no resistance was observed for piperacillin/tazobactam and gentamicin. Amoxicillin–clavulanate and ceftriaxone 30µg susceptibility reports were not analyzed for non Enterobacteriaceae isolates.

Among the four gram-positive bacterial isolates, overall antimicrobial resistance rate by both DST and AST methods, in the decreasing order was as follows: penicillin (100%), cefoxitin (50%), ciprofloxacin, erythromycin, cotrimoxazole, gentamicin, amikacin and clindamycin (25% each) and no resistance was observed to vancomycin, and linezolid.

Comparison of interpretative results with direct susceptibility testing method (DST) and standard antimicrobial susceptibility testing method (AST) for Enterobacteriaceae is shown in Table 2. In this study we found total of 15 minor errors (4.8%) and three major errors (0.97%) for 28 Enterobacteriaceae isolates against 11 antimicrobial agents tested (i.e., total of 308 isolate/antibiotic combinations). Maximum errors were recorded for piperacillin/tazobactam with five (17.9%) minor errors and one (3.6%) major error. However, we did not find any errors for gentamicin, ceftriaxone, cefotaxime, levofloxacin, and meropenem.

Comparison of interpretative results with DST and AST for Enterobacteriaceae isolates

Among non Enterobacteriaceae isolates (n=5), comparison of interpretative results with DST and AST, we found total of two minor errors, one each for gentamicin and imipenem; however, we did not find any very major error. (i.e., when organisms were found to be susceptible by DST and actually resistant by standard AST method).

In the present study, overall minor errors observed among all 33 gram-negative rods was 17 (4.7%, i.e., 17/363 X100), out of total of 358 organism-antimicrobial agent combinations, [i.e (28 Enterobacteriaceae isolates X 11 antibiotics tested) + (5 non Enterobacteriaceae isolates X 10 antibiotics tested)]. 16 Among four of Staphylococcus aureus isolates we did not find any mismatch in the susceptibility interpretation by DST and AST methods.

Despite of advances in diagnosis and treatment in the medical care, bacterial sepsis remains as one of the leading cause of morbidity and mortality, particularly among neonates and elderly patients in developing countries. The etiological agents causing sepsis and their antimicrobial susceptibility are constantly evolving. Hence the study of bacteriological profile with direct antibiotic susceptibility testing may play an important role in effective early management of blood stream infection cases.4, 12, 18

In the current study, overall prevalence of bacteremia was 9.6% and majority of patients (40.5%) were clinically diagnosed to have sepsis and septic shock. In the current study, by direct gram staining of positive blood culture BacT/ALERT bottles gram negative bacteria were more common (89.1%) than gram-positive bacteria (10.9%). Notification of direct Gram stain reports of positive blood cultures have a significantly higher impact than the release of antimicrobial susceptibility report for empirical antimicrobial management of BSIs.19, 20

Of the 33 gram-negative bacterial isolates, Enterobacteriaceae were majority (n= 28, 75.7%) and among which, Escherichia coli was the commonest isolate (51.4%), followed by Klebsiella pneumoniae (10.8%). Among the gram-positive bacteria, four Staphylococcus aureus were isolated, of which two were (50%) methicillin resistant Staphylococcus aureus (MRSA). In various other studies by Rajshekar D et al., and Annamallaei et al., similar findings were documented.19, 21 However, as our sample size was smaller (37 only), we cannot further opine on the common bacteriological profile.

Antimicrobial resistance rate among Enterobacteriaceae isolates by standard AST method was observed highest with cefotaxime (83.3%), ceftriaxone and amoxicillin/clavulanic acid (79.2% each) followed by levofloxacin (58.3%), ciprofloxacin and gentamicin (45.8% each), amikacin (29.2%), cefoperazone/sulbactam, piperacillin/tazobactam (25% each), least resistance was observed for meropenam (8.3%), and imipenem (4.2%) respectively. Similar observations were made by various other studies by Negussie A et al, Annamallaei et al., and Rajeevan et al.18, 21, 22 Among non Enterobacteriaceae isolates resistance was observed highest for cefotaxime (83.3%), and least resistance was observed for meropenem and imipenem (20%). As these isolates were few (only five), hence any interpretation of resistance would not be correct; which requires larger sample size. Among the four Staphylococcus aureus isolates, two were MRSA. All four isolates were penicillin resistant and uniformly susceptible to vancomycin and linezolid. Studies done by many other researchers also observed same susceptibility pattern for gram-positive bacterial isolates.1, 19, 23

Direct susceptibility report may reduce the turnaround time and facilitate the early initiation of appropriate antimicrobial agent as compared to conventional susceptibility testing method; however, there should be higher level of agreement between the susceptibility reports of DST when compared to the standard AST reports.3, 4, 24 In this study we found total of 15 minor errors (4.8%) and three major errors (0.97%) for 28 Enterobacteriaceae isolates, out of total of 308 antimicrobial agent-organism combinations tested. This means, zone diameters by standard method were greater than DST and maximum errors were found for piperacillin/tazobactam with five (17.9%) minor errors and one (3.6%) major error. However, we did not find any errors for gentamicin, ceftriaxone, cefotaxime, levofloxacin, and meropenem. As in this study non-Enterobacteriaceae isolates were few (n=5), we found two minor errors, one each for gentamicin and imipemen and we did not find any major errors. Similar observations were made by study by Noman F et al., Coorevits L et al and Rajshekar D et al. Most of the discrepancies were in beta lactam/beta lactamase combinations and aminoglycosides.3, 12, 19

While reporting DST results of these antibiotics one should be cautious, as these are major antibiotics used for life threatening infections. The main sources of errors by DST may be i) mixed cultures or ii) non-standardized inoculum size, iii) disk to disk variations. As in the present study, specimens yielding more than one bacteria were excluded from analysis, and our data are based on mono-microbial positive blood cultures, first source of error may be excluded. We did not observe any discrepancies in interpretation of susceptibility report for gram-positive bacteria, considering interpretation of methicillin resistance in staphylococci, by cefoxitin disk and oxacillin screen agar testing. Similar findings were observed in other studies.19, 25

Currently with availability of reference documents (CLSA M 47-A and EUCAST RAST method v 1.1), recommending the standard procedures for performing direct susceptibility from the positive blood culture broth and also keeping in mind the advantage of early reporting in management of critically ill patients with sepsis, we should consider DST as effective step towards antimicrobial stewardship to control the irrational use of broad spectrum antibiotics. This may further contribute to reduce the antibiotic resistance; however large size studies need to be conducted to document these observations.

Early recognition of sepsis and appropriate microbiological and radiological investigations to aid in diagnosis is essential to improve the patient outcome. When used selectively and interpreted cautiously DST reports from positive blood culture samples is potentially useful in management of critically ill patients. However, DST report must always be confirmed by the standard AST report. In the past, due to unavailability of standard recommended method DST results have reported erroneous results, but however recently both CLSI and EUCAST guidelines have come up with the standard procedure for performing DST on positive blood culture sample. However, larger sample size would have helped us to get conclusive evidence on impact of definitive therapy on outcome of patients with sepsis.

There is a high concordance between DST and conventional AST. Considering the clinical and economic benefits of early availability of reports by DST, a close coordination between the laboratory and clinicians for interpretation of microbiological reports are crucial for management of patients with BSIs.

This project was supported and funded by PIMS fellowship 2017.

The European Committee on Antimicrobial Susceptibility Testing. Breakpoint tables for interpretation of MICs and zone diameters, version 10.0, 2018" (or another relevant version and year)