Roopashree and Kaup: Prevalence of various Beta-lactamases in Enterobacteriaceae in a tertiary care hospital in South India: A Cross-sectional study

Prevalence of various Beta-lactamases in Enterobacteriaceae in a tertiary care hospital in South India: A Cross-sectional study

Introduction: Antimicrobial resistance among bacteria has constantly increased over the years with emergence of novel resistance mechanism among these versatile organisms. Identifying the resistance pattern of the isolates both regionally and globally is essential for the institution of appropriate antimicrobial therapy. This study was conducted to assess the prevalence of beta-Lactamase enzymes among species of Enterobacteriaceae.

Materials and Methods: 312 consecutive isolates belonging to the family of Enterobacteriaceae were included in the study conducted over a period of one year. After preliminary antibiotic susceptibility testing using standard guidelines, production of various beta-Lactamase enzymes was assessed by phenotypic methods.

Conclusion: Our study estimates the prevalence of various beta-Lactamase enzymes in isolates of Enterobacteriaceae in a tertiary care centre. The increase in production of these enzymes among bacteria necessitates the implementation of strict adherence to antibiotic policy and infection control measures.

Extended spectrum beta lactamases (ESBL) are a group of enzymes that are capable of hydrolysing Penicillins, first, second and third generation cephalosporins and monobactams like Aztreonam but are inhibited by beta lactam inhibitors like Clavulanic acid. They do not have any effect on Cephamycins and Carbapenems.2

ESBL producing Gram negative bacilli are frequently multi-drug resistant as the plasmids coding for ESBL production may also carry genes coding for resistance to other classes of antibiotics like quinolones, aminoglycosides and trimethoprim-sulfamethoxazole.4

Carbapenems are the antibiotics of choice for the treatment of severe infections caused by Extended spectrum beta-lactamase producing bacteria.5 They are broad-spectrum antibiotics that inhibit the enzyme transpeptidase thus preventing peptide cross linking during peptidoglycan synthesis. Carbapenem resistant Enterobacteriaceae show resistance to one or all of the Carbapenem antibiotics like Imipenem, Meropenem, Doripenem or Ertapenem.6 Enterobacteriaceae can acquire resistance to carbapenems by production of Carbapenemase enzyme, hyperproduction of Amp C or by production of Extended spectrum beta lactamase along with porin mutations or by efflux pumps.3 Carbapenemases are plasmid-mediated and readily transferred among bacteria.7 The most common type of carbapenemase found in India is NDM-1. 5

Determining the accurate burden of antimicrobial resistance in India is difficult due to absence of an obligatory antimicrobial resistance reporting system and the non-uniform testing methods and modalities used by different laboratories with varying sensitivity and specificity.1 Ongoing surveillance of the distribution and antimicrobial resistance pattern of the isolates in a hospital facilitates the selection of appropriate empiric therapy and also strengthens the infection control practices by prompt identification of resistant isolates. The present study intends to estimate the prevalence of various types of Extended Spectrum beta lactamases among isolates of Enterobacteriaceae in our hospital.

This prospective cross-sectional study was conducted in the department of Microbiology at Shridevi Institute of Medical Sciences & Research Hospital, Tumkur for a period of one year from January 2019 to December 2019. Isolates of Enterobacteriaceae were identified using standard Microbiological techniques.8 Antimicrobial susceptibility testing was performed using Kirby-Bauer disc diffusion method and the susceptibility to antibiotics were assessed based on Clinical Laboratory Standards Institute guidelines.9 All the antibiotic discs were procured from Himedia Laboratories Pvt. Ltd.

Isolates of Enterobacteriaceae showing a zone diameter of ≤ 22mm for Ceftazidime or ≤ 27mm for Cefotaxime were presumptively identified as ESBL producers and were included in the study.9 Isolates of Salmonella and Shigella species were not included. 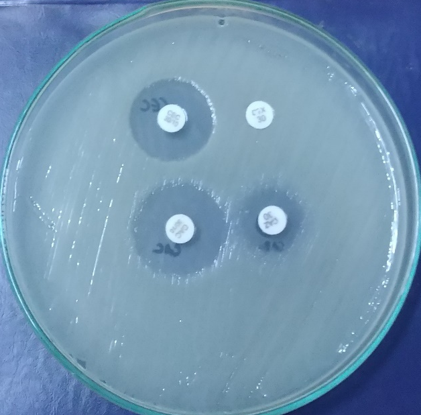 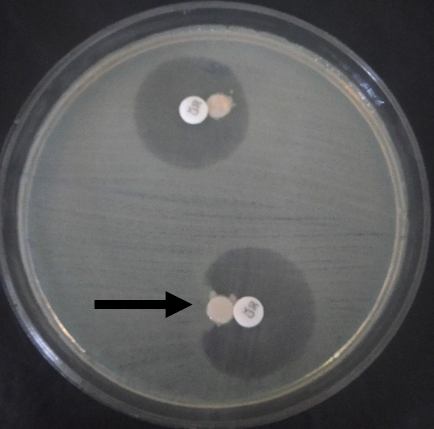 Isolates that were resistant to third generation cephalosporins and Cefoxitin were subjected to Amp C disk test to detect plasmid-mediated Amp C production. Lawn of Escherichia coli ATCC 25922 was made. Cefoxitin disc was placed close to filter paper disc containing 4-5 colonies of isolate. After overnight incubation, an indentation of zone of inhibition for Cefoxitin was considered as plasmid-mediated Amp C positive.10 Figure 2 shows a positive AmpC disk test.

Isolates that were sensitive to third generation cephalosporins and Cefoxitin were subjected to Disk Antagonism test to detect inducible Amp C production. Inducible AmpC was identified by blunting of Ceftazidime or Cefotaxime zone towards inducer (Imipenem) and sensitivity to Cefepime. 11 Figure 3 shows a positive Disk Antagonism test. 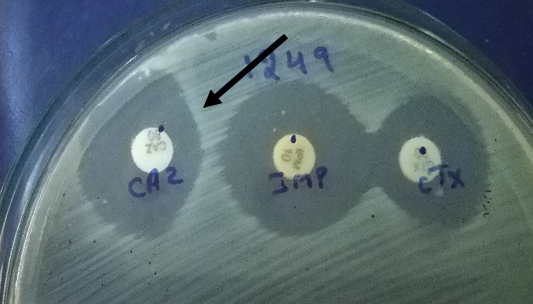 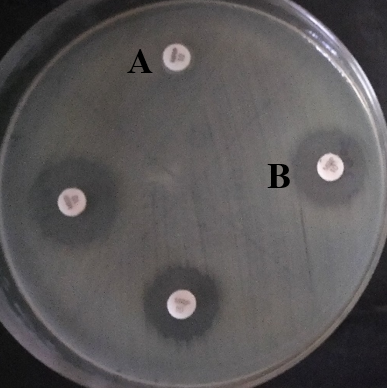 All isolates resistant to either Meropenem or Imipenem were further tested for Carbapenemase production using Modified Carbapenem Inactivation Method (mCIM). Isolates that were positive by mCIM were further tested by EDTA-modified Carbapenem Inactivation Method (eCIM) to differentiate between Serine and metallo-beta-lactamse. Isolates of Enterobacteriaceae giving a negative result by mCIM test were considered negative for Carbapenemase enzyme. Isolates positive by mCIM and negative by eCIM were considered Serine-β-Lactamase producers and isolates positive for both mCIM and eCIM were considered as Metallo-β-Lactamase producers.9 Figure 4 shows an isolate producing Metallo-Beta-lactamase enzyme demonstrating a positive mCIM and eCIM test.

312 consecutive isolates of Enterobacteriaceae were obtained from various clinical samples during the study period. Figure 5 shows the sample-wise distribution of the various isolates.

Sample-wise distribution of the various isolates. 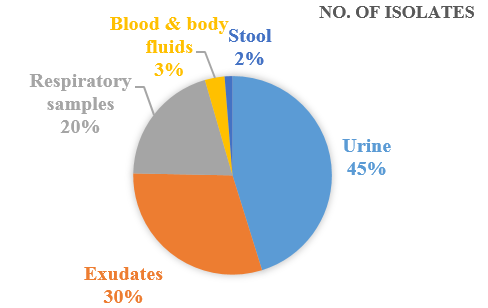 196 (62.80%) of these isolates showed resistance to either Cephotaxime or Ceftazidime and were further examined for production of Extended Spectrum beta-lactamase enzymes by phenotypic methods.

Distribution of beta-lactamase enzymes among Enterobacteriaceae

Escherichia coli was the predominant isolate to produce Extended-Spectrum Beta-Lactamase enzyme, constituting 70.4% (n=50) of the isolates followed by Klebsiella species accounting for 22.53% (n=16).

Likewise, among the AmpC producers Escherichia coli was the chief isolate forming 48.3% (n=57) of the isolates followed by Klebsiella species composed of 23.73% (n=28).

Production of various beta-lactamase enzymes by the isolates of Enterobacteriaceae

Antimicrobial resistance is an escalating global concern. Institution of appropriate antibiotics only when indicated along with standard infection control practices is the need of the hour to curb this menace. Assessing local prevalence of antimicrobial resistant isolates and their mechanism of resistance is essential for the prescription of appropriate antibiotics. The present study was conducted to estimate the prevalence of various beta-lactamase enzymes among isolates of family Enterobacteriaceae.

In the current study, 22.76% of the isolates produced Extended Spectrum Beta-lactamase enzymes. Our findings were comparable to a study conducted by Gupta et al12 in Chandigarh where the prevalence of ESBL was found to be 24%. However, other studies in India have shown a higher occurrence of ESBL enzymes in isolates of Enterobacteriaceae.13, 14, 15, 16, 17

Among Escherichia coli, ESBL production was found in 31.05% of the isolates which is lower compared to other similar studies done in India.17, 18

In our study, 16.67% of the Klebsiella isolates were ESBL positive. In comparison, study done in Bangalore showed a higher prevalence of 46.6% among Klebsiella pneumoniae isolates.19

AmpC beta-lactamases render the bacteria resistant to various beta-lactam antibiotics including beta-lactam/beta-lactamase inhibitor combinations. Studies have shown that presence of AmpC enzymes in the isolates can lead to false sensitivity to cephalosporins leading to therapeutic failures.10 This highlights the need for identification of these enzymes in the isolates. There are no standard Clinical and Laboratory Standards Institute guidelines for the detection of AmpC enzymes.9 AmpC disk test for plasmid mediated AmpC and Disk antagonism test for Inducible AmpC were employed in our study.10, 11

Prevalence of AmpC enzyme in our isolates was found to be 37.82%. The findings of our study were comparable to similar studies conducted in Mumbai,13 New Delhi18 and Bangalore.20 However, studies conducted in Pune and a multi-centric study involving New Delhi, Kochi, Lucknow, Wardha and Pondicherry detected lower levels of AmpC enzymes in isolates of Enterobacteriaceae.15, 21

35.40% of Escherichia coli isolates were positive for AmpC enzyme. Similar prevalence was found by Govindaswamy A et al., in New Delhi.18 Klebsiella species however showed a higher prevalence of AmpC enzyme in our study compared to other studies done in India.22

Isolates in our study showed a lower prevalence of ESBL and high prevalence of AmpC enzymes. Studies have shown that co-production of AmpC and ESBL enzymes can lead to false negative results with ESBL tests.2 This could be a reason for the detection of lower numbers if ESBL producers in our study.

The limitation of our study is that molecular methods were not employed, precluding the assessment of presence and classification of drug resistant genes in our isolates. In addition, small sample size hinders the generalization of the study results. As our study was conducted over a span of one year, we could not assess any change in the trends of distribution of beta-lactamase enzymes in our isolates from one year to another. Antibiotic policy has been formulated and implemented in our institution in the past one year. Assessing the prevalence of these resistance mechanisms over a period of time will enable us to assess the impact of adherence to the policy.

The current study has outlined the prevalence of various beta-lactamase enzymes in isolates of Enterobacteriaceae. Awareness of institutional and regional distribution of these isolates is essential to prescribe appropriate empirical therapy. Antimicrobial resistance is a public health concern which can cause grave consequences. Inappropriate use of antimicrobials and paucity of newer antimicrobial agents will soon force us to enter the post-antibiotic era wherein hitherto curable infections will become life-threatening. A concerted effort by members of all sectors of the hospital involving judicious antimicrobial prescription, strict adherence to institutional antibiotic policy and infection control practices is essential to control the pandemic of antimicrobial resistance.

B Sasirekha Prevalence of ESBL, AmpC β-lactamases and MRSA among uropathogens and its antibiogramEXCLI J201312818

M Kaur A Aggarwal Occurrence of the CTX-M, SHV and the TEM genes among the Extended Spectrum β-lactamase producing isolates of Enterobacteriaceae in a tertiary care hospital of North IndiaJ Clin Diagn Res2013746425