Background: A Gram-positive spore forming bacilli, aerobe or facultative anaerobe is Bacillus cereus. It is ubiquitous which disperse in the environment. Bacillus is a potential pathogen accountable for fulminant human infectious disease and hardly ever contribute to eye infections.

Case Presentation: A 35-year-old farmer came to ophthalmology OPD on February 2019, and the patient complained of acute onset left eye pain with diminution of vision. There was history of eye injury by the vegetation (thorn). There was presence of corneal ulcer. The patient was not immunocompromised.

From colonies Gram staining showed Gram positive bacilli with spore. They were motile, catalase positive, oxidase positive, reduced nitrate to nitrite and were resistant to penicillin. The identification was also confirmed by Vitek.

Conclusion: This case highlights the importance of cultivation, detection and antibiotic susceptibility test rather than treating patients with ocular infection empirically.

The Bacillus genus accommodates of 268 species and seven distinctive subspecies cognizant till now. Bacillus encompass 59,989 genes. The groups were discriminated but one strain contain 45% similar gene with the other strain.1 A few species  are considered as laboratory contaminants due to frequently present in the surrounding and a very few species causes infection in the human being. Contact lens keratitis, traumatic eye which may lead to endophthalmitis and following hurdle of ophthalmic surgery problems, the causative agent isolated is Bacillus cereus.2

Bacillus species are prevailing Gram positive bacilli arranged in pairs or chains 1 x 3-4μm, with a one endospore and might grow marvelous at temperatures ranging from 25 to 37°C, even though some species are thermophilic and psychrophilic also. Bacillus anthracis is the most virulent species of the genus with the reasons of effectuate anthrax. Capsules of B. anthracis are perceptible if is grown in blood, serum or is found in very clean fulgent tissue samples and visualized using Giemsa stain. The benefit of spore stain to speckle the spores of Bacillus species. The endospores stained by Schaeffer Fulton method appear green while the vegetative form are red or pink.

Primarily gleaned on the morphological patterns of the spore and sporangium, Bacillus species were classical categorized in group for root comparison. The Gram positive rods with central spores assemble in the first group of classification. B. anthracis, B. cereus, and B. thuringiensis. Gram variable bacilli were diverge on the basis of spore. Gram variable bacilli with central spores were under second group, e.g B. circulans and B. coagulans and another with terminal or subterminal spores, under third group e.g B. sphaericus. Now a days Taxonomic nomenclature is following, in which genus Bacillus is categorized under two group B. subtilis and another B. cereus.3 Recent classification is based on using 16 S rRNA.

On blood agar Bacillus species grow with β-haemolytic ,large and flat about 2-5mm in diameter. It have irregular margin, slightly convex, rough, dull grey colonies and are. On basis of the gene all species could be differentiated using polymerase chain reaction (PCR), MALDI_TOF, sequencing, pyrosequencing .

B. cereus is a deadly and life threatening organism. The toxins produced by it within six hours in retinal and corneal cells had been reported after perform in vitro test. B. cereus additionally causes severe intra-ocular inflammation that could lead to damage of eyesight and demolition of the globe within 24 to 48 hours Toll like receptor TLR2 and TLR4 are essential in the severe intraocular inflammation discovered in the course B. cereus endophthalmitis.4 B. cereus variants are described by using by their chromosomal DNA and the acquisition of virulence plasmids pXO1 and pXO2 and gene expression related to key regulatory genes.5 Atypical B. cereus and Bcbva strains may have hyaluronic acid (HA) capsules that be may probably expressed by manner of  the plasmids harbor. The pBC210 plasmid in B. cereus G9241 (atypical strains) encodes a mono-ADP-ribosyltransferase (mART) that has been targeted certhrax toxin. Another structural feature is the S-layer (or surface layer) that would play a role in virulence. In B. cereus G9241, many S-layer proteins proportion homology with those determined in B. anthracis and its impairment can result in slight decrease in virulence .Other virulence factors are hemolysis, motility and penicillin resistance are differentially expressed by atypical B. cereus and Bcbva strains. The hemolysin BL (HBL) and the nonhemolytic enterotoxin (NHE) are protein complexes that are regulated by quorum sensing.

A case of 35-year-old man, residence of Maharashtra, India, farmer by profession came to ophthalmology OPD on February 2019. Patient complained of pain in left eye which was acute in onset along with decrease of vision. There was history of eye injury by the vegetation (thorn). The presence of corneal ulcer on the left cornea was noted. It was superficial in nature. The patient had developed conjunctivitis also. The patient was not immunocompromised. The patient was otherwise healthy. Patient presented with either bacterial or fungal keratitis may reveal loss of vision range from hours to days.

On examination reported that the patient vision was 6/6 right and 6/12 left eye. The patient left eye had diminution of light perception and was raised intra-ocular pressure noted. There was presence of redness of left eye along with oedema over the eyelid. The anterior and posterior segment of the both eye examination was normal. Initial diagnosis was established on patient history and clinical examination. The patient was diagnosed with left eye keratitis with corneal ulcer and treatment was started with topical gentamycin (0.3%) eyedrop empirically.

The corneal scraping was processed in Microbiology laboratory of Wardha. These are fundamental tool of microbiology for diagnosis. The detection of the pathogen is done first by Gram stain after culture motility, lecithinase and penicillin susceptibility were performed.

Specimen corneal scrapping was collected from left eye before the antibiotic treatment is initiated. On Gram staining from corneal scrapping only two Gram positive bacilli, with occasional pus cell and fibrinous exudate was seen. Gram stain can identify 75% of pathogen in bacterial conjunctivitis and keratitis.

Polymyxin egg yolk mannitol bromothymol blue agar (PEMBA) as selective medium were used on which it produces characteristic blue colonies due to mannitol not fermented along with a zone of precipitation due to hydrolyses lecithin produce by B. cereus. On PEMBA Staphylococcus aureus, Serratia marcescens and Proteus vulgaris also grow. They produce an egg clearing reaction in comparison to the precipitate produced by B. cereus that was only difference be noted.3

From blood agar and PEMBA colonies staining had been done performed. From colonies Gram staining show Gram positive bacilli arranged in pairs or chains with ends may rounded and have a single endospore as shown in Figure 1.

Gram positive rods in pairs which have a single endospore 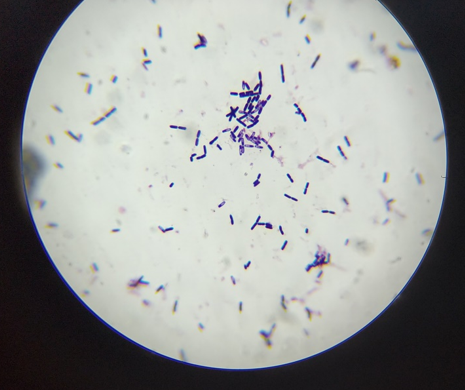 Biochemical tests were performed from the colonies grown on Blood agar were detected by conventional tests. They were positive for catalase and oxidase test. On egg yolk agar Nagler test were performed after inoculation of culture and incubation for 18 – 24hr at 35°C – 37°C, observed zone of precipitation which showed Lecithinase production on egg yolk medium. B. cereus ferment glucose maltose, sucrose, fructose, ribose and trehalose, proteins and amino acids and can reduce nitrates to nitrites. Arginine is hydrolyse by B.cereus. Both B.cereus and B. thuringiensi are morphological similar so differentiated by biochemical reactions. B.cereus not ferement mannose and turanose but ferement cellobiose. In opposition to B.cereus, B. thuringiensi ferement both mannose and turanose but not cellobiose.

The identification was confirmed by Vitek. To confirm and accurate diagnosis of causative agent traditional method is supplemented molecular or automated methods. But culture remains the gold standard methods.

Antibiotic susceptibility: All Bacillus species are resistant to penicillin with the only exception B. anthracis,. Bacillus cereus are also resistant to cephalosporins. As per CLSI recommendation antibiotic susceptibility were performed Bacillus cereus were resistant to penicillin, trimethoprim, Susceptible to antibiotics based on classification clindamycin (Lincosamide), erythromycin (Macrolide), vancomycin (Glycopeptide), Amikacin and gentamycin (aminoglycosides) and tetracycline.3

In eye and ocular tissues Bacillus infections considered as a rare. Though Bacillus spp. are considered a minimal threat to human infections overall. B.cereus to differentiate from the other genus of Bacillus criteria was established after 1948. However, difficult even today to distinguish phenotypically B.cereus from Bacillus thuringiensis which are the causative agent for eye infection.

In keratitis cases the Bacillus species was isolated 5.3% among all other organism.6 Bacillus species prevalence of ocular isolates, B.cereus accounted for 56.2% followed by B.thuringiensis 26.3%, B. substilis, B. mycoides and B. pumilis 5.2% each; B. flexus 2.6%. B.cereus infection of a penetrating eye injury usually develop from trauma with a soil contaminated intra ocular foregin body. This occurs more commonly in agriculture surroundings.7 B. cereus not only causes the keratitis but also spread the infection in the eye and leads to endophthalmitis have been reported in the lierature. A case had been reported a thron stick injury which lead to endophthalmitis and the causative organism isolated was B.cereus.8 Another case reported by Kácerik M et al in 15 year old boy was diagnosed with unilateral keratitis by ophthalmologist on presumption of herpetic keratitis was treated for two months. Patient was not improved and their after Bacillus was isolated and targeted treatment given clinical scenario improved rapidly Patient most likely suffered secondary infection by B. cereus.9

Recent days molecular identification promote rapid and accurate microbiological diagnosis and semi quantify bacterial loads to detect specific atigens from infectious agent. It is more rapid and accurate method. The 16 S rRNAcan be recognition by PCR, sequenced and compare presented genera or species to a database for speciation.

B. cereus produce beta –lactamase due to which it is resistant to penicillins and cephlosporins but is susceptible to, glycopeptides, aminoglycoside ciprofloxacin, clindamycin, and erythromycin. The most effective antibiotic is Ciproﬂoxacin for Bacillus ocular isolates, followed by vancomycin. In ophthalmic severe infection is the combination of vancomycin and an aminoglycoside, clindamycin with gentamicin is advisable. In one of the article mentioned that the topical fourth-generation ﬂuoroquinolone, gatiﬂoxacin and moxiﬂoxacin antibiotics are competent for preventing Bacillus spp causing ocular infections.10 It had been reported despite the antibiotic can kill the Bacillus but do not affect the toxins produced by it at the time of infection which could lead activation of inflammatory pathway and tissue damage.So recently validating biomimetic nonspongs that can neutralize B.cereus pore forming toxins.7

This case highlights the importance of culturing ocular specimen and detection of the pathogen in patients with ocular infections. If the patient is treated with broad-spectrum antibiotics empirically, it will cause undue delay most of the time and cause progression of damage to the eye. For preventing corneal ulcer complication by Bacillus that is opacification of cornea and endophthalmitis. So timely identification, intervention, prescription and administration of antibiotic is strength of the management for protecting vision is a critical need. In this case, the provisional diagnosis was mycotic keratitis the causative agent was actually Bacillus cereus which is a rare cause of keratitis. Ongoing research is required in the field medical microbiology because of emergence of new strain of B. cereus.