Choudhury, Sonawane, and Chowdhary: The study of prevalence of needle stick and sharp injuries among healthcare workes in tertiary care hospital, Navi Mumbai

The study of prevalence of needle stick and sharp injuries among healthcare workes in tertiary care hospital, Navi Mumbai

Introduction: Needlestick injuries (NSIs) as defined by accidentally puncture the skin by needles. The occupational exposures to NSIs are considered to be much higher in the developing world and multiple risk factors eg. improper use of protective equipment (like failure to use suitable-sized gloves), working in surgical or intensive care units, insufficient work experience, young age, needle recapping, unsuitable needle disposal, intravenous cannulation may contribute to NSIs.

Aim: To determine the occurrence/ prevalence of needle stick and sharp injuries (NSIs) among healthcare workers working in a tertiary care hospital and the factors responsible for NSIs.

Materials and Methods: A cross-sectional study was conducted in a tertiary care hospital among HCws in the hospital over a period of one year Jan 2020-December 2020.

Conclusions: HCWs are always at high risk of attaining NSIs. The nursing staffs followed are the most vulnerable group who gets the sharp/NSI and require extra attention. As a preventive measures regular training and education of nursing staffs and all other categories of health care workers to be ensured in healthcare settings.

Needlestick injuries (NSIs) as defined by accidentally puncture the skin by needles such as hypodermic needles, blood collection needles, intravenous (IV) stylets, and needles used to connect parts of IV delivery systems. These injuries can occur at any time when people use, disassemble, or dispose of needles. (OSHA Guidelines) When not disposed of properly, needles can hide in linen or garbage and injure other workers who encounter them unexpectedly Whereas, Sharps" include needles, as well as items such as scalpels, lancets, razor blade, scissors, metal wire, retractors, clamps, pins, staples, cutters, and glass items.1

Percutaneous exposure occurs as a result of a break in the skin caused by a needlestick or sharps contaminated with blood or body fluids. Mucocutaneous exposure occurs when body fluids come into contact with open wounds, nonintact skin such as found in eczema, or mucous membranes such as the mouth and eyes. Health care workers (HCW) are at an increased risk of accidental needle stick and sharp injuries (NSI). This been recognized as a source of exposure to blood‑borne pathogens such as hepatitis B virus (HBV), hepatitis C virus (HCV), and human immunodeficiency virus (HIV) among HCWs and responsible for a significant proportion of HBV, HCV, and HIV infections in this group.2

It has been estimated by the CDC that every year more than three million HCWs are exposed to blood and body fluids via sharp and mucocutaneous injuries in the United States alone with an annual estimated 6 million NSIs. 3

According to a WHO study, the annual estimated proportions of health-care workers (HCW) exposed to blood-borne pathogens globally were 2.6% for HCV, 5.9% for HBV, and 0.5% for HIV, corresponding to about 16,000 HCV infections and 66,000 HBV infections in HCW worldwide.

The occupational exposures to NSIs are considered to be much higher in the developing world and it is expected that around 75% of the NSIs in developing countries are not reported. 7

Keeping these all factors as frontrunner, this study was undertaken to determine the occurrence/ prevalence of needle stick and sharp injuries (NSIs) among healthcare workers working in a tertiary care hospital and the the factors responsible for needle stick injuries.

The study population include doctors including residents and inters, nurses and nursing students from second to fourth year, house-keeping staffs working in the hospital were eligible to participate in the study. Those who were not willing to participate or refused and those who could not be contacted for three consecutive visits as a follow up for NSIs were excluded from the study. Ethical approval was obtained prior to the study from Institutional Ethics Committee and confidentiality of the participants was maintained.

We analyzed the data of all the HCWs who voluntarily reported injuries by needlestick, sharps such as cannulas, broken vials and splashes on cuts, and mucous membranes by potentially infectious materials such as blood and other body fluids. Scratches with a minute or no blood oozing following the injury were classified as superficial injury and injuries penetrating through the skin or leading to bleeding wound as deep injury. As a routine practice, We administered a questionnaire to all self‑reporting HCWs. The exposed HCWs were asked to fill up a self‑reporting questionnaire which included information regarding the type of injury, the source of injury (known/unknown), use of personal protective equipment at the time of injury or splashes, what type of work the HCWs does, the severity of the injury, emergency/routine health care, hepatitis B vaccination status, immediate postexposure measures taken like washing of hands, status of source of exposure, and if the HCW was knowing his/her status of HIV, HBV and HCV positivity.

We have an active PEP program with an integrated approach to prevention including awareness raising, teaching, training, protective equipment like heavy duty gloves, banning of recapping, needle cutter at every ward, sharps containers, colored‑coded waste bins, vaccination as well as round the clock sharps and splashes reporting and blood testing facility based on the guidelines of the National AIDS Control Organization of India (NACO).8 Regular classes as a part of study curriculum are conducted separately for each group of by interactive lectures, audio–visual aids and hands‑on practice, especially among newly inducted staff at least once a year. The standard pro forma for tests as prescribed in the NACO guidelines for each occupational exposure was followed. Hospital infection control nurses, clinical microbiology residents, and trained technical staff were actively involved in follow‑up and counseling of each exposed HCWs in our PEP program.

HCWs who got exposed to HIV seropositive patients were immediately referred to the antiretroviral therapy clinic at our hospital. For seroconversion, all HCWs under investigation were counseled and advised to get tested again after 3 weeks, 3 months, and finally after 6 months. The serum samples of patients from whom the HCWs got exposed, if known, were also tested for HIV, HBV, and HCV with viral load, if screening tests were positive. The outcomes of such exposed HCWs and rate of seroconversion were noted. 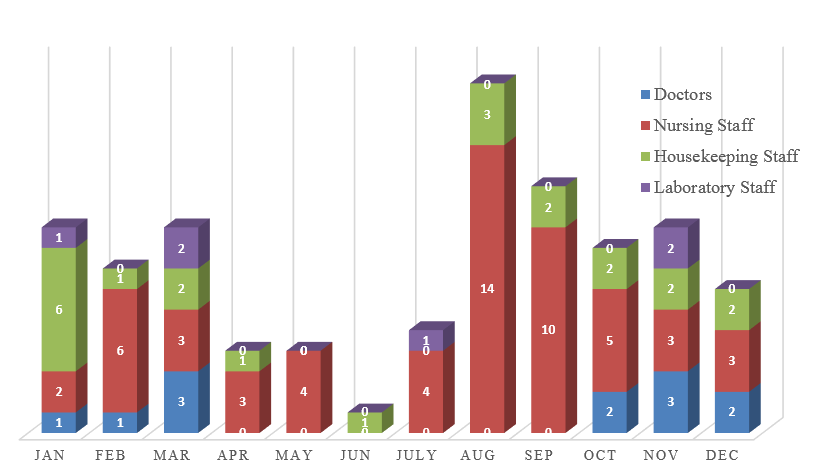 Causes of NSI among HCW 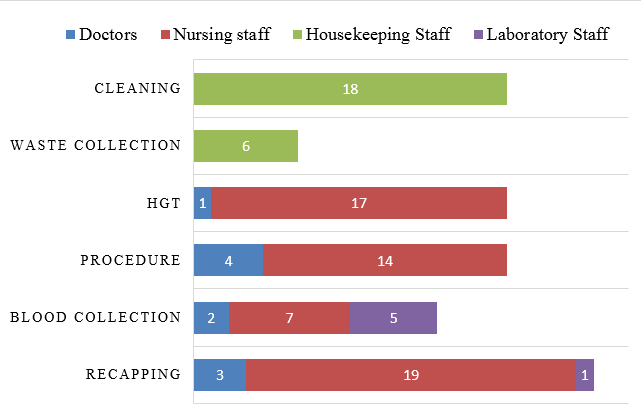 The HCWs are vaccinated against Hepatitis B virus vaccination either with full 3 doses (97,88.8%) or 2 doses (9, 8.4%). The serological test was performed in completed vaccine candidates to confirm their protective titre.

Among the NSI cases no one got pricked from any HIV, HBV and HCV seropositive patients.

The few unknown source like accidental NSI due to needle lying on floor was mainly observed in housekeeping group and they were given Anti-retro viral drugs after risk assessment. Staffs with h/o of NSIs were followed up after one, three and six moths of NSI. However, nine HCWs could not be followed up on six months as they have left the job.

Many NSIs are reported in hospitals worldwide through out the year and are associated with risk of exposure to blood-borne pathogens such as HIV, HCV, and HBV.

There was no significant difference in incidents related to the gender of the HCWs. Among Sharp and needle stick injury is one of the greatest concerns as occupational hazards among healthcare workers. Nursing staffs are the most frequently injured by sharp and used needle followed by housekeeping staffs, doctors and laboratory technicains. The study conducted by Thiyagarajan M et al showed that nursing staffs were the most commonly reported sharp/needle stick injury (44.6%) followed by students (14.5%) and janitors (13.3%).9 Another study by Goel V et al reported that a large number of the sharp/NSIs incidents among doctors (73.7%) followed by interns (7.4%), and faculty members (1.1%). Interestingly, only 19.1% nurses reported injuries, while 3.2% of the exposed HCWs were hospital waste disposal staff, not involved directly in patient care or surgical procedures.10 These studies indicate that most commonly exposed healthcare worker group may vary to hospital.

In present study, the commonest area for sharp/needle stick injury was found to be ICUs (39.65), whereas operation theatre, IPDs, OPDs and laboratory reported 13.2%, 24.5%, 14.1% and 8.5% respectively. According to Goel V et al study most sharp/NSIs reported from the ICUs (48.1%) followed by general ward (29.8%), operation theatre (3.3%), labour room (8.1%), treatment room (9%).10 Another study conducted by Rishi E et al. reported Sharp/NSI most frequently in operation theatre (67%). These studies indicate that sharp/NSIs are more common in emergency or critical care areas. The reason may be due to work load, less manpower and emergency situation round the clock in those areas. 11

India is considered to have intermediate level of endemicity with regard to HBV. The point prevalence of HBV is 3.7%, which include over 40 million HBV carriers. HBV is the second most common cause of acute viral hepatitis after HEV in India, whereas chances of getting HBV infection is 5-30%. Unvaccinated and incompletely immunized healthcare workers are at higher risk of getting hepatitis-B infection in case of sharp/NSI. In addition, need of the hours is to evaluate causes of underreporting of sharp/NSI among healthcare workers. 14

HCWs are always at high risk of attaining NSIs. The nursing staffs followed are the most vulnerable group who gets the sharp/NSI and require extra attention. As a preventive measures regular training and education of nursing staffs and all other categories of health care workers to be ensured in each hospital. Training session to be organized from 1st year MBBS students under early clinical exposure programs as well as for the new joining intern and post graduate students. The standard precautions to be followed for every patient with or without available HHH investigation report. In a tertiary teaching hospital, mandatory provisions for complete vaccination against hepatitis-B helps need of immunoglobulin in staffs if an unvaccinated staffs got sharp/NSI from a sero-positive HBV patient. It also given mental assurance to staffs in case of accidental injury. To avoid under reporting of NSI every institute should implement regular counselling, training, prompt post exposure prophylaxis and follow up of HCWs who has got sharp/NSIs.