Materials and Methods: Samples were cultured on Blood agar and MacConkey agar then incubated at 370 C for 24 hours. Any growth for further confirmed by Gram stain and appropriate biochemical tests, and then Antibiotic sensitivity test was done.

Conclusion: Antimicrobial resistance always pose challenges for clinician for treating wound infection the present study guide clinician about common pathogens and countered in pus sample furthermore it help the clinician to select and treat patients with proper antibiotics and decreased mortality and morbidity.

Skin prevents infection in many ways because it is our essential immunity and substantially concluded the production of sweat and sebaceous secretions that provide acidic PH and protection such as fatty acids. Lysozymes has certain properties such as dissolving bacterial cell and antifungal properties.1

Patients correlated Factors such as old age, nutritive states, already existing infection or comorbidity or hospital acquired Factors such as poor surgical techniques, elongated time period of surgery, preoperative part preparation, instruments of surgery not been sterilized sufficiently rises risk of infection.5 Sepsis always occurs due to bacterial infection after successful treatment of wound resulting a high morbidity and mortality.6 It has been seen that coagulase positive Staphylococcus aureus found in pus followed by Pseudomonas aeruginosa and Enterobacteriacae. S.aureus and Pseudomonas it accounts for 20-40% of all nosocomial infection. Pus also consist of all many staphylococcus aureus, coagulase negative staphylococci, E. coli, Pseudomonas aeruginosa, Klebsiella pneumonia, Enterobacter species and Proteus mirabilis. 7 Infection control has become difficult due to bacterial resistance to antibiotics and resistant of methicillin S. aureus, polymicrobic flora and by fungi.8 Mortality and morbidity causing bacteria are examined for the susceptibility to antibiotics and their spectrum is being examined for wound infection.9 Surgical site infection that occurs at an incision site within 30 days after surgery. 10

By using Kirby bauer disc diffusion method according with CLSI guidelines, using antibiotics, and all isolates were tested for antimicrobial sensitivity in mullen hinton agar. 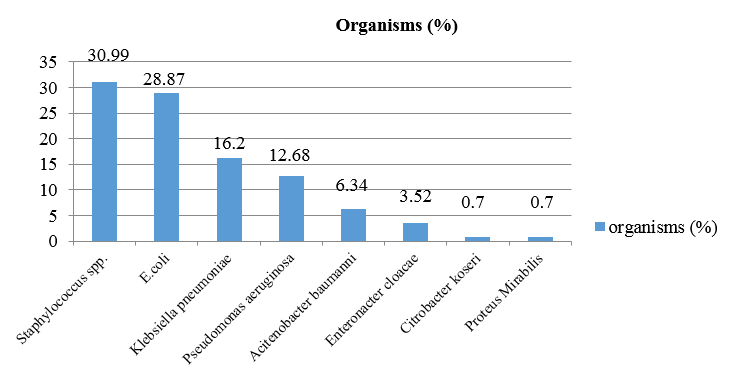 The present study was conducted in TMU medical college research center Moradabad, UP. Infection that occurred at the site of surgery is known as Surgical site infection.

During the period from December 2018 to September 2019 out of 172 wound swab from recruited patients after informed written consent were obtained.

In the present study gram negative microorganism E.Coli sensitive to Tigecycline (100%), Colistin (100%) followed by Amikacin (58.53%) Gentamycin (48.78%) and Ceftariaxome (100%), Ceftazidime (80.48%) are resistant. Rama Bastola et al (2017)24 found that E.coli was resistant to Ceftriaxome and Ceftazidime and sensitive to Amikacin and Gentamicin.

The aim of this study Spectrum of all Microorganism isolated from surgical site infection was carried out on patient suffering with post-operative infection in Teerthanker Mahaveer hospital. In this study total 172 patients were included in which 82.55 were pathogenic isolates, 12.5 were non -pathogenic and in 12.20 there was no growth. We observed that higher Surgical site infection occur in the age group of 41-61 year. Most common Pathogenic organisms found to be Staphylococcus aureus. The Staphylococcus SPP 44 isolates (30.99) followed by E coli 41 isolates (28.87) Klebsiella pneumoniae 23 isolates (16.20), Pseudomanas aeruginosa 18 isolates (12.68), Acinetobacter baumanni 9 isolates (6.34), Enterobacter cloacae 5 isolates (3.52), Citrobacter koseri 1 isolate (0.70) and Proteus Mirabilis 1 isolate (0.70). Out of 142 total positive isolates in which gram positive isolate frequency 30.99 and gram negative isolates frequency 69.01.

In this investigation the most prevalent Antibiotic Sensitivity pattern for gram positive bacteria was Vancomycin and Amikacin whereas gram negative bacteria were more Susceptible to Gentamicin and colistin.

I would like to thanks entire Microbiology department, TMMC & RC for their guidance and cooperative behaviour.

A Zambouri Preoperative evaluation and preparation for anesthesia and surgeryHippokratia20071011321