Background: Bacterial respiratory infections are most commonly causes of illness for all age group patients in ICU. Most of the patients suffer from urosepsis, postoperative disease and lower respiratory infection when admitted in ICU’s. The main purpose of this study is control in ICU’s infection & determine their antibiotic sensitivity pattern for better treatment of patients.

Materials and Methods: We performed manual culture of Endotracheal aspirate & BAL fluid specimens collected from ICU’s patients. Samples were cultured on Blood agar and Mac-Conkey agar then incubated at 370C for 24 hours. Any growth were further confirmed by Gram stain and appropriate biochemical tests, and then Antibiotic sensitivity test was done.

Result: Among the 123 mechanically ventilated patients and 68 of them developed positive samples. In this study 55.3% (68) pathogenic isolates, 4.1% (5) were non pathogenic isolates and 40.6 (50) were no growth isolates in BAL and endotracheal aspirate samples. In which 67.6% (46) male and 32.4% (22) female patients. Older population falling in the 40-50 years of age group contributes the majority (27.64%) of the infection undergoing treatment for LRT infection in ICU’s patients in TMMC & RC, Moradabad, and in 70-80 years of age group (4.06%) was less contributes of this infection. Among the causative agents, Pseudomonas, Acinetobacter, Klebsiella, E.coli, Enterobacter, Citrobacter were most common among gram negatives and Staphylococcus aureus was common among the gram positive isolates. In our study more resistance gram positive antibiotics were CIP, E, LE, and most sensitive antibiotics were VA, LZ, GEN and TEI. And gram negative bacteria most resistant antibiotics were OF, CPM, CAZ, CIP, CTR, MRP, LE, IPM, PIT and most sensitive antibiotics were AK, GEN, CL, TGC. In this study we conclude that Gram-negative bacilli were predominant in BAL fluid and endotracheal aspirates of ICU patients. Out of 68 multidrug resistance isolates, 1.47% were MRSA, 41.17% were ESBL and 57.36% were MBL isolates higher rate of ESBL production seen in Pseudomonas spp., and higher rate of MBL production in Acinetobacter spp.

Conclusion: High incidence of VAP and the potential MDR pathogens are a real threat in our ICU’s. Combined approach of judicious antibiotic usage and training programs to health care personnel might be of help in combatting high incidence of antibiotic resistance in our institute.

Bacterial respiratory infections are most commonly causes of illness for all age group patients, which cured with invasive mechanical ventilation in ICU.1 It is systemic pathway via which body acquired fresh oxygen and remove carbon dioxide. The respiratory tract system are classified in the following parts upper and lower respiratory tracts. 2

Lower respiratory tract structure includes larynx, vocal folds, trachea, bronchi, bronchioles and alveoli. The most commonly occurring respiratory tract infection are tracheitis, bronchiolitis and pneumonia. It can have severe effects which may lead to hospitalization and loss of life. 4

In ICU’s nosocomial infection have been included as a severe problem among intubated patients leading to major mortality and morbidity. Most of the patients suffer from urosepsis, postoperative disease and lower respiratory infection when admitted in ICU’s. 5

The study was carried out in the department of microbiology, in TMU hospital Moradabad. Total numbers of 123 clinical samples were processed in which 68 pathogenic isolates were found. The samples were collected properly taken in clean, leak proof sterile container & tubes from various ICU’s in our hospital. All sample received in the microbiology lab, smears were examined after performing gram staining to see the character of exudates, number and type of organisms. Culture of ET secretion, BAL fluid & trans-tracheal aspirates was done on Blood agar plates and Mac-Conkey agar plates and incubated at 370C for overnight in the incubator. After 12 hours colonies appear (if growth) were processed for subsequent identification. Colonies have been identified on the basis of colony morphology and culture characteristics and After gram’s staining speciation and do biochemical’s & Antimicrobial Sensitivity pattern was by Kirby-Bauer disc diffusion method. 7, 8

The Kirby-Bauer disc diffusion method used in this research, according with the CLSI guidelines, using antibiotic discs, all isolates were tested for antimicrobial susceptibility in Muller Hinton agar. 9, 10

Confirmatory test for MRSA All microorganisms were isolated and tested for methicillin resistance using a Cefoxitin disc (30mcg) and incubated overnight at 350C according to the CLSI guidelines. The zone of inhibition was studied under reflected light on a non-reflected backdrop on Petri plates. According to CLSI guidelines isolated organisms demonstration an inhibition of <14 mm were considered MRSA.9, 11, 12, 10

The samples were obtained from the patients admitted in ICU’s of our hospital. Out of 123 total suspected cases of BAL fluid and endotracheal aspirate were included in this study among in which 68 (55.3%) positive samples were found.

Showing isolated organisms out of 123 samples. 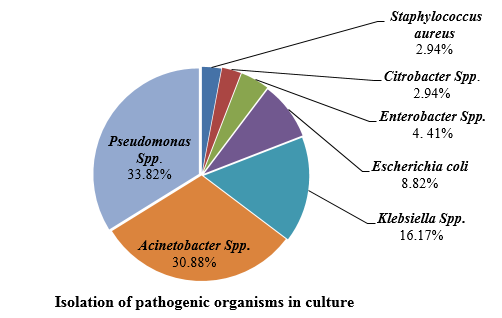 The current study done in TMMC & RC, Moradabad, U.P. Respiratory tract disease are one of the major public health issues, affecting both children and adults; they appear to be more serious when located in the LRT. The most common infections seen in the community and among hospitalized patients remains pneumonia. Out of the 123 endotracheal and BAL fluid sample were collected after receiving written consent from the patient 64.22% (79) constitutes male population, the remaining 35.78% (44) being the female population.

In our study 55.28% (68/123) organisms were isolated in BAL and endotracheal aspirate samples. In which 67.6% (46) male and 32.4% (22) female patients. Older population falling in the 40-50 years of age group contributes the majority (27.64%) of the infection undergoing treatment for LRT infection in ICU patients in TMMC & RC, Moradabad. And in 70-80 years of age group (4.06%) was less contributes of this infection. A study conducted in Siriraj hospital from Thailland was highly comparable to our study. In this study done by Werarak P and Kiratisin P et al. 13 who reported 24.7% HAP and 75.3% VAP patients. In this study 70% constitute male population and 30% female population with the mean age of 70 years respectively. The study was also based on parameters of age and gender. It was found that in our study both in male were more affected due to various reasons.

The goal of our study was bacteriological profile and their antibiogram from endotracheal aspirate and BAL fluid samples in our hospital. In our study LRTI are the most common causes of nosocomial pathogens and that are responsible for causing variety of human illness. The emergence of multi-drug resistant organisms is more common in the current age of antibiotic resistance.

In our study total 123 patients included in which pathogenic isolates were obtained in 55.3% of cases. Most common pathogenic organism found to be Pseudomonas, Acinetobacter, Klebsiella, E.coli and Enterobacter, Citrobacter, Staphylococcus aureus. Since bacterial isolation may vary in different geographical regions and even over time in the same location and population. In this study we found 40.6% were no growth and 4.1% were non pathogenic isolates (may be S. pneumoniae, Candida spp.) in ICU patients. Higher prevalence of LRTIs observed in the age group 41-50 years, as well as LRTIs still a major health threat in old age group.

In this study we conclude that Gram-negative bacilli were predominant in BAL fluid and endotracheal aspirates of ICU patients. Out of 68 multidrug resistance isolates, 1.47% were MRSA, 41.17% were ESBL and 57.36% were MBL isolates. Higher rate of ESBL production was seen in Pseudomonas spp., and higher rate of MBL production in Acinetobacter spp. In the main purpose of this study is control in ICU infections, to determine the common bacterial isolates and their antibiotic sensitivity pattern for better treatment of patients.