Aim and Objective: The purpose of this study is to isolate, identify and specification of various the Candida species from various clinical samples in a tertiary care hospital, and to characterize various the isolated Candida species.

Conclusion: Our study showed that Candida albicans is the most common isolates species. Among non albicans Candida, C.tropicalis was found to be the most common isolate followed by C.glabrata, C.krusei. Children less than 1 year are most affected with maximum number of Candida species were obtained from NICU department. HiChrom Candida is proven to be more useful as differential agar.

Candida is yeast like fungus. It is a ubiquitous human commensal. It becomes pathogenic and causes infections when the host's resistance to infection is lowered either locally or systemically. 1

The genus Candida comprises of about 150 yeast species, which is composed of a heterogeneous group of organisms & consists of more than 17 different Candida species that are responsible for different human infections. 2 The commonest pathogenic species of this genus is Candida albicans, it has namely A and B, on basis of their differences between mannan components of cell wall. 3

Candida is the most opportunistic fungal pathogen, which results in various manifestations ranging from mucocutaneous lesions to life threatening invasive diseases. Although Candida albicans is the most common cause of candidiasis accounting for about 60-80% of infections, a shift towards non albicans Candida species is evident in recent years. 4 It include various species such as C.glabrata, C.tropicalis, C.parapsillosis. Among these, C.tropicalis is one of the most common non albicans Candida species isolated from various clinical types of candidiasis. 5

The morbidity and mortality associated with candidal infections are significant and have emerged as important public health problems. Increasing use of broad-spectrum antibiotics, intravascular catheters, cytotoxic chemotherapies, invasive surgical procedures and long duration of hospital stay are few of the pre-disposing risk factors. 6

The emergence of non albicans Candida species may represent selection of less susceptible species like C. glabrata and C.krusei. C. glabrata is less susceptible and C. krusei is intrinsically resistant to Fluconazole. C. tropicalis has the highest adherence rate to inanimate materials such as urinary and vascular catheters, and is often involved in biofilm formation, that is more resistant to antifungal agents. Resistance to azoles in C. tropicalis and C. albicans has also been increasingly reported. 7

The azole drugs have been commonly used to treat many forms of Candida infections for a long time. Resistance to the azole is seen more in non albicans Candida species as compared to C. albicans. Although many new antifungal drugs have been licensed in recent years, their resistance is becoming a major concern during treatment of such patients. 8

Among the most studied Candida species, Candida albicans has several known virulence factors contributing to its pathogenicity that include adherence to epithelial and endothelial cells, proteinase production, pseudohyphae formation, phenotypic switching, phospholipase production and antigenic modulation as a result of pseudo hyphae formation. After yeast cells of Candida encounter a particular host tissue, colonization takes place at the local sites or it invades deeper into the host tissue. 3

Candidiasis is an opportunistic fungal disease found in humans who affect the skin, nails, mucosa and various internal organs. There are several types of candidiasis including mucosal candidiasis, cutaneous candidiasis and systemic candidiasis and the incidence of all these infections has been increased due to many factors such as more people living with HIV, the excessive use of antibiotics, organ transplantation and the use of invasive devises. 9

A study was conducted in the department of Microbiology in our institute. Various samples obtained from people of different age groups with suspected candidiasis from IPD & OPD from January 2019 to December 2019 were processed in mycology section.

Candida species isolated from different patients were included in the study. The samples were collected using aseptic conditions and the patient’s information such as name, age, sex, occupation, duration of hospitalization, ward, underlying medical conditions, associated risk factors such as presence of urinary catheter, mechanical ventilation, central line insertion, duration of antibiotic therapy, antifungal prophylaxis, exposure to invasive procedures, and use of corticosteroids were obtained from clinical records and analyzed.

Various tests performed for the identification of Candida species are given below-:

Direct microscopic examination was done by Potassium Hydroxide mount (KOH) to see the presence of fungal elements. It was prepared from Potassium hydroxide (10gm), Glycerol (10ml) and Distilled Water (80ml).

The wet mount of KOH was prepared by the following two methods:

For the isolation of Candida species the samples were inoculated on Sabouraud dextrose agar (SDA) with antibiotics and incubated aerobically one at 22°C in Biological Oxygen Demand (BOD) and other at 37°C in incubator for 48hrs.10

The growth was identified as yeast like organisms by smooth, cream colored, white and pasty colonies on SDA after 3 to 4 days as shown in Figure 2. The further confirmation was done by Gram Staining to observe the presence of yeast cells and pseudohyphae as shown in Figure 3, Germ tube test, Chlamydospore formation on Corn meal agar, growth on CHROM agar and the biological test were sugar fermentation, sugar assimilation for final confirmation of species. 4

Speciation of Candida was done by following methods-

Candida isolates were present in 35 males (64.8%) and 19 females (35.2%). The rate of isolation of the Candida species was more in male patients than female patients.

The results of the Conventional method & HI Chrome Candida differential agar for various species are as shown in the Table 2. 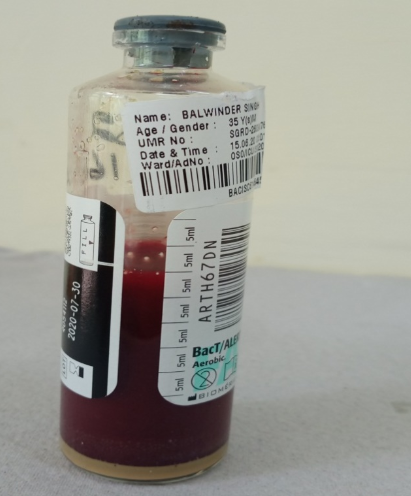 Growth of Candida species in SDA 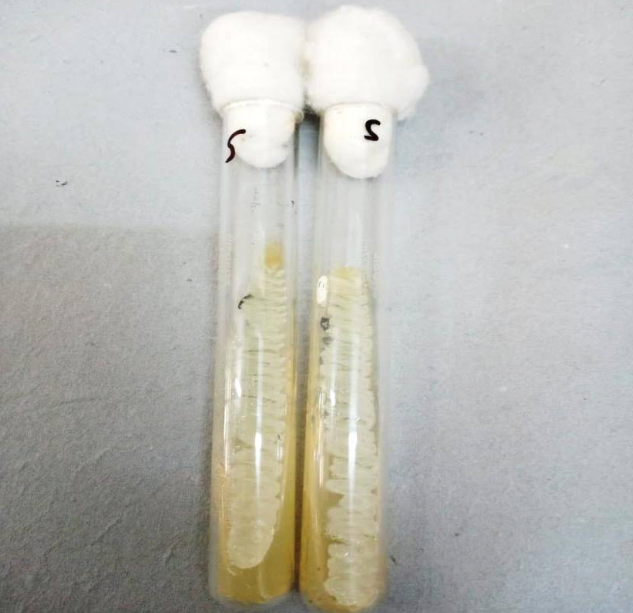 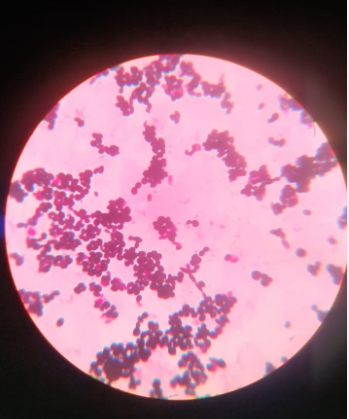 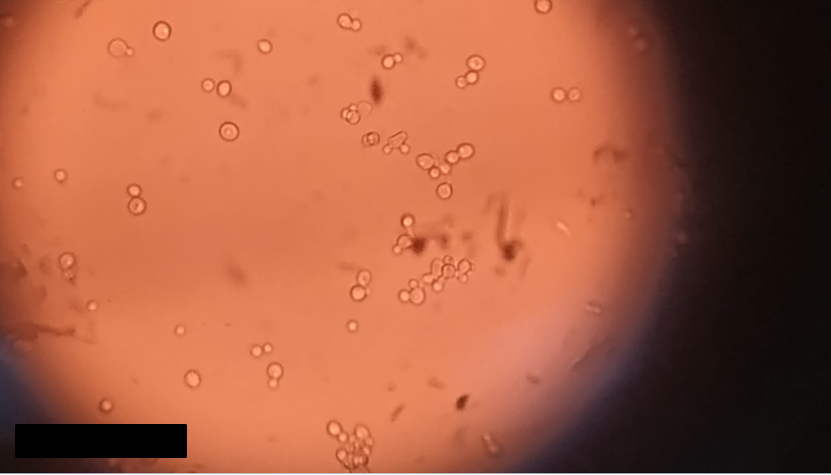 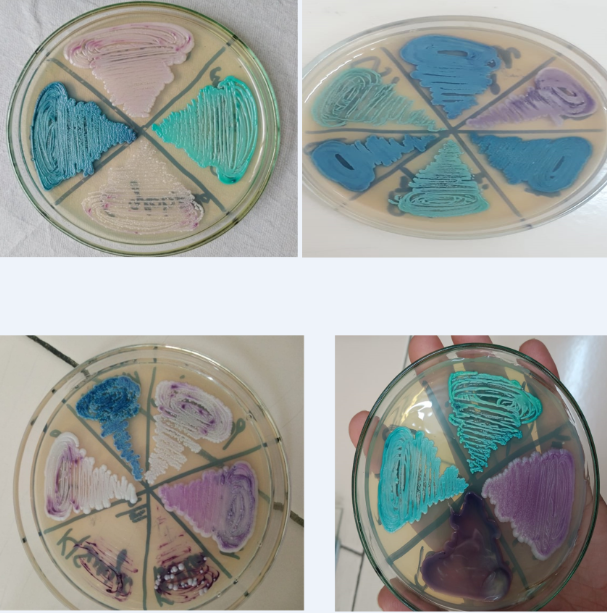 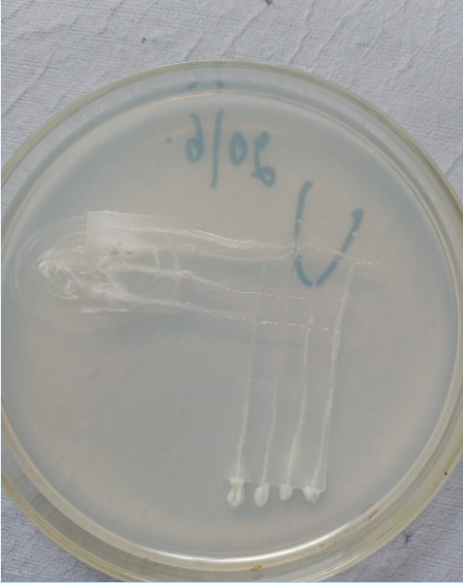 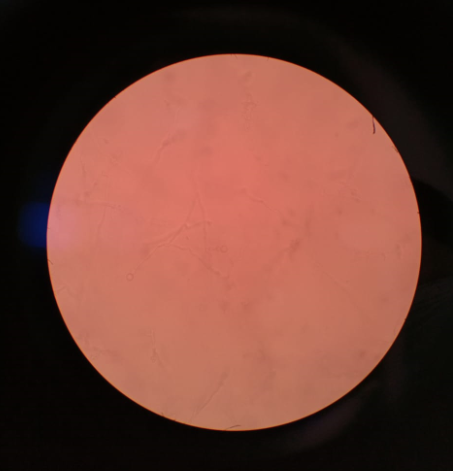 Candida species are one of the major fungal pathogens of humans causing a diverse range of diseases. Most notable among invasive candidiasis is candidemia. Nosocomial bloodstream infections due to Candida species are associated with a mortality rate of 5% to 71%. According to the findings of the Centers for Disease Control and Prevention, Candida infections are held responsible for 11% of all nosocomial infections. Candida albicans remains the leading cause of Candida bloodstream infections; however, the prevalence of non albicans Candida infections has increased worldwide, particularly C. tropicalis, C. glabrata, C. parapsilosis and C. krusei as seen by Bac N.D et al.12

In this study, 54 Candida species were isolated from various clinical sample which include blood (57.4%) followed by sputum (31.5%), urine (7.4%) ,Catheter tip(1.9%), Skin(1.9%). Maximum number of Candida species were isolated from blood sample. This study correlates with the observation of other authors who showed that majority of Candida were isolated from blood 33.6% by Tavleen Jaggi et al, 6 50% by Manmeet Gill et al 17 and 57.7% by Raminder Sandhu et al. 18 This study is not similar with Sankarankutty Jaya et al 19 who proved that majority of Candida isolates were from urine (48%) followed by respiratory sample (17%).

In this study, out of 54 Candida isolates obtained from various clinical samples, majority were Candida albican (38.9%). Among non albicans Candida, C. tropicalis (35.2%) followed by C. glabrata (16.7%), C. krusei (9.3%) which is similar with another study conducted by Tavleen Jaggi et al 6 in which Candida albicans was the commonest species isolated causing (44%) of the infection followed by Candida tropicalis, Candida parapsilosis causing (26.4%) and (12.8%) of the infection respectively and also by other authors such as B.S.G Sailaja et al21 that showed higher incidence of Candida albicans (64%) over non albicans Candida(36%) but it is discordant with the study carried out by Mokaddas et al in 2007 showed that non albicans Candida incidence (60.5%) were higher than that of C.albicans (39.5%) and also by Rachana Mehta et al in 2016 showed that the isolation rate of non albicans Candida (59.1%) were higher as comparatively C.albicans (40.9%).

In this study, all the 54 isolates of Candida species namely C. albicans, C. tropicalis, C. glabrata, and C. krusei were identified by conventional method. Candida isolates were inoculated on HI Chrome Candida differential agar. We observed that performance of HI Chrome Candida differential agar for identification of the above four species were exactly parallel to that of conventional method. Similar findings were observed in various studies like Amar C.Sajjan et al22 in 2014 and Mr Joginder et al23 in 2020

This study emphasizes the requirement of precise isolation and identification of Candida species from various clinical samples. Prevalence of candidiasis was found to be higher in patients associated with predisposing factors like indwelling vascular catheters, prolonged antibiotic therapy and diabetes mellitus. Our study showed that Candida albicans is the most common isolates species. Among non albicans Candida, C.tropicalis was found to be the most common isolate followed by C.glabrata, C.krusei. Children less than 1 year are most affected with maximum number of Candida species were obtained from NICU department.

HiChrom Candida is proven to be more useful as differential agar, as it provides for the rapid isolation and identification of medically important candida species in a resource-limited setting and it is cost effective.