Group B Streptococcal infections among nonpregnant adults: A cross sectional study from a Tertiary care teaching hospital in South India

Purpose: To understand the epidemiology of Group B Streptococcal infections among nonpregnant adults and to study the antibiotic susceptibility profile of GBS isolates.

Materials and Methods: A cross sectional study conducted in the department of microbiology in a tertiary care teaching hospital during December 2018 to May 2020. Group B Streptococcal (GBS) isolates from clinical samples of nonpregnant adults were included in the study. Identification and antibiotic susceptibility testing of GBS isolates were performed according to standard microbiology techniques. Patient’s demographic features and clinical details were collected from medical records.

Results: A total of 58 GBS isolates were obtained from nonpregnant adults during the study period. There was a female (60.3%) predominance among the study group. Mean age of the study subjects was 51.4 years. In our study GBS were commonly isolated from urine 50% (n=29) and wound swabs 46.6% (n=27). One isolate each (1.7%) was obtained from blood culture, urethral swab and high vaginal swab. Common GBS infections noted in this study were Urinary tract infections (50%) and skin and soft tissue infections (46.6%). Diabetes mellitus (58.6%) was the most common risk factor noted in our study. All the isolates were sensitive to Penicillin, Linezolid and Vancomycin. Erythromycin and clindamycin resistance of 13.8% and 6.9% respectively were noted.

Conclusion: A shifting trend of GBS infections from pregnant women and neonates to non-pregnant adults was observed in the present study. In patients with diabetes mellitus GBS could be considered as causative agent of skin and soft tissue infections.

The present study is a cross sectional study, conducted in the Department of Microbiology of a tertiary care teaching hospital during December 2018 to May 2020.

Group B Streptococcal isolates obtained from various clinical samples received in the microbiology laboratory were included in the study. GBS isolates obtained from pregnant individuals, neonates and pediatric age group were excluded from the study. Patient’s medical records were reviewed for details including the demographic features, clinical diagnosis, co morbidities, treatment and outcome.

Identification of the isolates

During the study period, a total of 78 isolates of GBS were obtained from various clinical samples received in the microbiology laboratory. Of the 78 isolates, 58 (74.3%) were obtained from non-pregnant adults, 16 (20.5%) from pregnant women, three (3.8%) from neonates and one (1.2%) from a pediatric patient. Among the non-pregnant adults there were 23 (39.6%) males and 35 (60.3%) females. The age wise distribution of subjects with GBS infection is given in Table 1. The mean age of the study subjects was 51.4±14.1 years (lowest 19 years and highest 83). Fifty percentage of GBS isolates were obtained from urine (n=29) followed by wound swabs (44.8 %, n=26). One isolate each (1.7%) was obtained from blood culture, urethral swab and high vaginal swab. 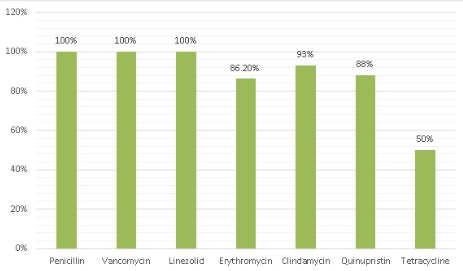 Comparison of demographic features and risk factors of GBS infections

Clinical profile of study subjects given in Table 2. Predominant GBS infection noted in our study was Urinary tract infection (50%) followed by skin and soft tissue infections (46.6%). Among patients with urinary tract infections (UTI), five patients had complicated UTI which included hydronephrosis and recurrent pyelonephritis. Skin and soft tissue infections (SSTI) included cellulitis (12.1%), abscess (22.4%), infected ulcers (19%), suture site infection (3.4%), gangrene (5.2%) and necrotizing fasciitis (1.7%). Other diseases served in our study were sepsis, urethritis and pelvic inflammatory disease (PID). Among the two patients with sepsis, focus of infection was identified as infected ulcer in one case and UTI in another patient.

The risk factors and co morbidities noted in patients with GBS infection are given in Table 3. The major risk factor came to be diabetes mellitus (58.6 %) followed by renal disease (13.8%). Peripheral vascular disease and coronary artery disease were other comorbidities noted in our study which came to be 8.6%. Urological malformations were found in seven (12%) subjects, six of them presented with urinary tract infection. Other co morbidities included Liver dysfunction (1.7%), HIV (1.7%), malignancy (1.7%), hypothyroidism (5.1%), hypertension (8.6%), pulmonary disorders (6.9%), gastro intestinal disorder (1.7%) and filariasis (1.7%). No risk factors or co morbidities was identified in 20.7% of the patients. Comparison of demographic features and risk factors for SSTI and UTI is given in Table 4 .

All the 58 isolates of GBS were sensitive to penicillin, vancomycin and linezolid. Antibiogram of the Group B streptococcal isolates are given in Figure 1. Erythromycin was found to be sensitive in 86.2% (n=50) of isolates. Clindamycin and quinupristin were found to be sensitive in 93% (n=54) and 88% (n=51) of isolates respectively. Highest resistance was observed for tetracycline 50% (n=29). Of the total eight macrolide resistant strains, D test was positive in three (37.5%) isolates, one isolate (12.5%) showed constitutive resistance (cMLSB) and the remaining four (50%) demonstrated M phenotype.

GBS has been recognized as a leading cause of meningitis and sepsis in newborns and as a cause of infection in pregnant and postpartum adults. Previous studies from developed countries shows a substantial increase in the burden of GBS infection among nonpregnant adults also, particularly among the elderly and those with underlying medical conditions.1, 2

In our study, GBS infection in nonpregnant adults was found to be quite higher than that found in pregnant individuals and newborns, which accounts to 73% of the total GBS infection. A female (60.3%) predominance was observed in our study especially among patients with UTI (72.4%) and the mean age of study group was found to be 51.4 years. Various studies from developed countries have shown male preponderance and the mean age of patients with GBS infections was slightly higher than our study finding, mean age ranging from 59 to 62 years.5, 6, 7

Clinical manifestations of GBS infection reported in adults are numerous and quite varied. Urinary tract infection (50%) was the most common GBS infection observed in the present study followed by skin and soft tissue infection (46.6%). In our study sepsis with identified focus constituted 3.4% which includes one case with infected ulcer and other with urosepsis. The most common syndromes due to invasive GBS disease reported in adults are primary bacteremia without a focus and skin and soft tissue infections.11, 12, 13 Bacteremia secondary to a focal source of infection and polymicrobial bacteremia are also reported in 26%−45% of cases in previous studies.12, 13 In this study polymicrobial infection of GBS along with Methicillin resistant staphylococcus aureus (MRSA) was noted in a patient with SSTI.

In the present study GBS infection occurred in patients with one or more underlying medical condition. The major risk factor observed in our study was diabetes Mellitus, especially among patients with SSTI. Peripheral vascular disease was the second common risk factor observed in patients with skin and soft tissue infections. In patients with urinary tract infection, urological malformations and renal disorders were also found to contribute to the disease. Malignancy, HIV, coronary artery disease, cerebrovascular disease, dyslipidemia, hypertension, hypothyroidism and filariasis were also observed as co morbidities in our study. However, no risk factors could be identified in 20.7% patients. Previous studies report diabetes mellitus and obesity as common comorbidities, particularly among patients with skin and soft tissue infections. 14, 15 In a surveillance on invasive GBS disease conducted in United states, population attributable risks of invasive GBS disease were 27.2% for obesity and 40.1% for diabetes. 15 In our study we could not identify obesity as risk factor due to the unavailability of Body Mass Index from the clinical records.

As documented in several studies, GBS is universally sensitive to the penicillins.16, 17, 18 So it remains the drug of choice in GBS infection. But in case of penicillin allergy, clindamycin, erythromycin can be an alternative, provided their susceptibility is known. In this study, as in many other studies, strains of penicillin-resistant GBS were not found. However, 13.8% and 6.9% isolates showed resistance to erythromycin and clindamycin respectively. High inducible clindamycin resistance (37.5%) noted among macrolide resistant isolates, which emphasize the importance of D test in routine antimicrobial susceptibility testing so as to overcome treatment failure. Previous studies show that over the past few years, the resistance rates to both erythromycin and clindamycin have increased. Among isolates from patients with invasive disease, resistance rates for erythromycin range from 7% to 32%, and for clindamycin, from 3% to 20%.17, 18 Therefore close monitoring of the GBS susceptibility profile to antimicrobial agents is warranted especially in penicillin allergic cases.

Most of the patients in our study had favorable outcome, but either recurrent infection or worsened condition was noted in 5% patients. The mortality in our study was found to be 3.4% and the two patients expired were diagnosed with sepsis. In several reports, primary bacteremia carries a high fatality rate. 16, 17, 18 Since GBS are susceptible to several commonly used antimicrobials including penicillin and cephalosporins, patients with GBS do not usually suffer from a delay in initiation of appropriate antimicrobial therapy and therefore overall have favorable outcomes , except for few cases with sepsis or urinary tract infections, were treatment failure are reported. 19 In a previous study, despite appropriate treatment, the clinical outcome was poor in about 18% of the patients in case of urinary infection. 19 Treatment failure or relapse in cases of UTI, is most likely the result of persistent vaginal or enteric colonization.20

The incidence and severity of GBS infections demonstrate variability over time. A shifting trend of GBS infection from pregnant women and neonates to non-pregnant adults was observed in the present study. In patients with diabetes mellitus GBS could be considered as causative agent of skin and soft tissue infections. Based on our findings, it may be suggested that routine antibiotic susceptibility testing including D test should be performed for all isolates of GBS to accurately identify the resistance pattern and to overcome treatment failure especially in penicillin allergic individuals.