Conclusion: As our study shows higher percentage of UTI in CAUTI so unnecessary catheterization should be avoided.

The most frequent bacterial illness is urinary tract infection. If Immune system fails to eliminate the bacteria that has bypass the first line of defence it results in urinary tract infection or a more severe illness furthermore.1 Females are usually more distressed than males. 2 Catheter- associated urinary tract infection develops when an indwelling urinary catheter causes an infection within 48 hours.1, 3 Fever, urinary urgency, stomach discomfort, difficulty in urination, pyuria, WBCs in urine are all signs of UTI.4 Most common uropathogens are E.coli, Klebsiella, pnemoniae, Enterobacter species etc. They are the most commonly faced nosocomial infection. It develops in patients using catheter for more than 7 days in almost 25% patients.1 The cathter lumen becomes clogged with crystalline deposits causing urine to be held outside the catheter and if these blocked catheters 5 are not changed that can lead to various complications like encrustation in catheter, formation of stones in bladder, sepsis, endotoxic shock and inflammation in kidney.6 It is always advisable to treat only symptomatic CAUTI1 And periodic surveys should be implemented. 7

It was collected from catheter tube that to from distal edge making use of sterile syringe and needle in a universal container and should be transported immediately to the laboratory. Collection from the catheter bag was avoided. 8

To minimize the contamination of periurethral flora clean catch midstream urine sample was taken. It was processed within one hour of collection and in case of delay it was refrigerated at 40c for 12-14 hours

Urine sample was processed in 2 ways

Detection of RBC, WBC, YEAST and EPITHELIAL cells was done through wet mount microscopy using uncentrifuged sample. Gram staining was done followed by biochemicals test to find out the bacteria responsible for infection 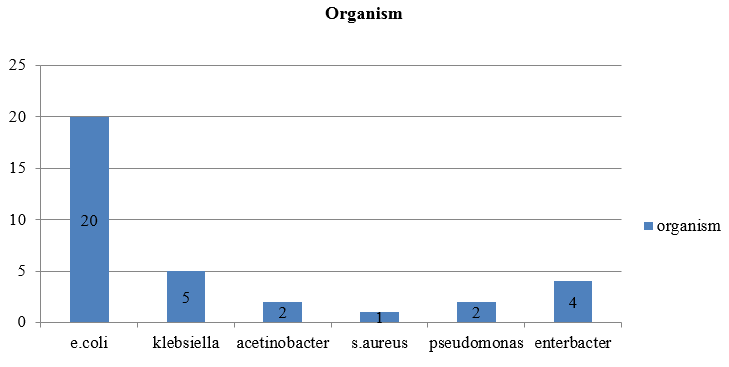 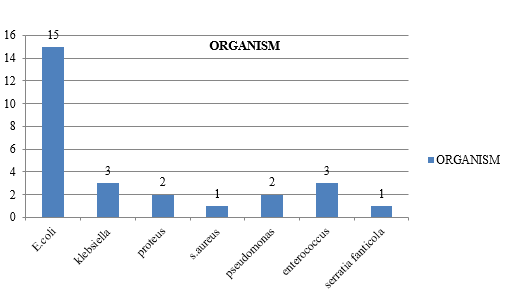 During the period from November 2019 to jaunary 2021, 170 urine samples were processed to determine occurrence of infection in urinry tract and catheter- associated urinary tract infection.

In our study done at microbiology department in teerthankar mahaveer medical college and research centre, occurrence of CAUTI was 40% that is 34 /85 samples tested positive for bacterial infection which was equivalent to research conducted by karthak R et al 11 and chatterjee N 12 et.al who reported CAUTI occurrence of 42% And 35.9% respectively. A research was carried out in New delhi by Bhatia N et al 13 concluded occurrence of CAUTI 22.4%. Rate of UTI infection in NON-CAUTI is 31% in our study here which co relates with the study done by Khan R et al 7 and Acharya V N et.al 14 who reported 33.4% and 36.3% occurrence of NON-CAUTI respectively.

It was found that in our study both in CAUTI & NON-CAUTI females were more owing to many physical and anatomic factors. In CAUTI our study concluded that 70.58% females and 29.41% males were having bacterial infection and in NON-CAUTI the percentage was 77.77 % in females and 22.22% in males. A study done by patil H V et al 15 in CAUTI got similar percentage i.e males 36.60% and females 63.69%. Also a study done on NON-CAUTI by Kumar H et al 16 had infections in females 65% and in males 35%. Some dis similar results were also seen in some studies where males were more affected than females. Study done by Sangamithra V et al 17 in CAUTI had more no of males affected 65% where as in females were 35%. It could be due to numerous factors as in males mild prostate enlargement causes an obstructive urinary lesion from benign prostate hypertrophy.

The present study on comparision of bacterial urinary tract infection in catheterized patients and non catherised patients was carried out on 170 samples, 85 catheterised and 85 non catheterized . The most frequent bacterial illness is urinary tract infection in human population. Sometimes this could also lead to complications like cystitis, biofilm formation, polynephritis and many more.

Our study concluded that Infection occurred more in CAUTI patients. Females were affected more than males. E.coli was the commonst isolated bacteria followed by klebsiella, and many more. As our study shows higher percentage of UTI in CAUTI so unnecessary catheterization should be avoided.