To determine the resistance pattern of Staphylococcus aureus in pus samples

Background: Staphylococcus aureus is a common health problem occuring as an important nosocomial pathogen, causing urinary tract infection, surgical site, blood stream and soft tissue infection. The aim of this research was conducted to determine MRSA and VRSA from the pus samples of admitted patients.

Aim & Objective: The aim and objective of study was to isolate the resistance pattern of Staphylococcus aureus in pus samples and their AST.

Materials and Methods: A total of 158 positive culture Staph aureus were taken from pus samples for the study during December 2019 - October 2020. Samples were cultured on Blood and MacConkey agar then incubated at 370C for 24 hours. The modified Kirby Bauer's disc diffusion method was used to test antibiotic sensitivity of staphylococcus isolates.

Conclusion: An antibiotic policy and screening of susceptibility patterns of MRSA may help in reducing the prevalence rate of MRSA and antibiotic resistance. To stop its spread to the population, it is very important to eliminate MRSA colonization in patients and health care workers. Accurate treatment helps to reduce the rate of morbidity and improvement of patient’s outcome.

Minor cut of the skin will allow the bacteria present on the surface to enter the body and start multiplication locally. Immune cells fight against the bacteria. 5 The isolated aerobes were identified as gram positive bacteria such asStaph aureus, Staph epidermidisand gram negative bacteria likeE coli, Klebsiella pneumoniae. 6 Pus is a thick fluid that can be generated by many organisms.7 Staph aureus is a important pathogen that creates problems for clinicians in the treatment of infections caused by an increase resistance to penicillin then now to oxacillin that means MRSA (Methicillin Resistant Staphylococcus aureus) also resistance other group of antibiotics like Linezolid, Vancomycin. 8 There are 12 variant genes have identified Van A-E, G, H, L, M, N, R and X. 9

This study was done on the patients attending Teerthanker Mahaveer Hospital and Research Centre (TMH & RC) Moradabad, UP, India, from December 2019 - October 2020. In this study patients of all the age groups (Except paediatric age) both male and female visiting in the Teerthanker Mahaveer Hospital were included and the pus samples were received from central laboratory of Microbiology Department for the microscopy, gram staining, manual culture and antibiotic susceptibility test. Total 158 isolates were of Staph aureus had been taken from the pus samples.

All isolated microorganisms were screened for Vancomycin resistance using Vancomycin disk (30mcg) and the plates were incubated at 350C for 24 hours as CLSI guidelines. For the zone of inhibition the petri plates were examined in reflected light on a non- reflected backdrop. Isolated organism demonstrating an inhibition of <17 mm were considered VRSA according to CLSI guidelines. 10

In this study total 320 pus samples were included, out of which 158 samples were found positive for Staph aureus, after that antibiotic sensitivity testing was done for 158 Staph aureus isolates. 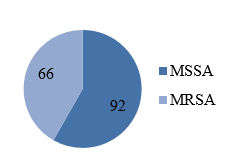 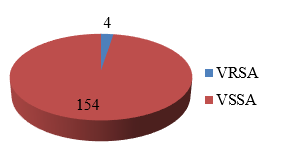 In both community and hospital acquired infections, Staph aureus is one of the most frequently isolated pathogens. MRSA is a methicillin- resistant strain of the bacterium Staph aureus. In our study, Out of 158 pus samples, 102 (64.6%) Staph aureus were isolated from males and 56 (35.4%) from females. On comparison our present study with the previous study that have been done in different areas of the country. In similar to this study Devi U S et al4 in 2017 there were 59 Staph aureus isolated 38 (64.4%) were males and 21 (35.5%) were females.

Emergence of MRSA and VRSA infections is a growing problem in our hospital. Our research shows that antibiotics sensitivity patterns of isolated Staph aureus can help in formulating the hospital antibiotic policy. Accurate treatment helps to reduce the rate of morbidity and improvement of patient’s outcome. An antibiotic policy and screening of susceptibility patterns of MRSA may also help in reducing the prevalence rate of MRSA and antibiotic resistance. Infections that are caused by MRSA, Vancomycin is the most effective drug and to protect its value for the long life infections, the use of Vancomycin as first choice of treatment should be avoided. The tolerance of Teicoplanin, Linezolid and Doxycyclin to MRSA shows low resistance, so they may be useful in the treatment of staph infections.