Co-infection of mucormycosis and aspergillosis in post COVID-19 patient: A concerning rare case report during second wave of COVID-19 pandemic

COVID-19 manifestations have been evolving and affect different parts of the body every time a new wave comes. Association of mucormycosis in COVID-19, Covid Associated Mucormycosis (CAM) affected patients especially affecting paranasal sinuses must be given serious and timely consideration. Prolonged history of uncontrolled diabetes and over the counter use of steroids and abrupt stoppage of steroids are two main factors aggravating the illness, and both these factors must be critically checked. Clinical condition like Mucormycosis are caused by pathogenic moulds of family Mucorales and Aspergillosis is caused by Aspergillus species and both can cause an invasive disease with high case fatality rate, especially in immunosuppressed patients. In the present study we are discussing a case of co-infection in Post COVID-19 patient affected with mucormycosis and aspergillosis. A 55-year-old male patient with Type 2 diabetes mellitus presented post covid with ptosis and diplopia. Mixed infections of Rhizopus arrhizus and Aspergillus flavus were diagnosed by means of fungal microscopy and culture from biopsy sample. Treatment with Amphotericin B was started, the patient responded clinically within 15 days.

Current pandemic of coronavirus disease 2019 (COVID-19) infection is caused by severe acute respiratory syndrome coronavirus 2 (SARS-CoV-2) which may be associated with a wide range of disease patterns, ranging from mild to life-threatening conditions depending on the organ involved and secondary opportunistic infections during weakened immunity in COVID and Post-COVID patients. The second wave of COVID-19 which started in mid March has affected India drastically, with the highest number of daily reported cases being slightly more than 0·4 million on May 7, 2021, and has declined since. Considering the impact of second wave and injudicious use of steroid in COVID-19 affected patients, wide range of secondary bacterial and fungal co-infections reported which may be associated with pre-existing morbidity (diabetes mellitus, lung disease). India has a high prevalence rate of type 2 diabetes mellitus, which is a well-known risk factor.1 We report the case of a Post COVID-19 patient, who during the course of the treatment, developed rhino-orbital mucormycosis. Ubiquitous filamentous fungus like mucorales and Aspergillus spp are the most frequent cause of fungal infections like mucormycosis and aspergillosis.1 There is dearth of data regarding coinfection in same host is scarce and considered a poor prognosis.2, 3, 4, 5 The most common presentation of invasive mucormycosis is rhinocerebral involvement.6 Rapid and efficient microscopic examination is necessary for prompt diagnosis and rapid treatment.1 Treatment can be medical or surgical (debridement and necrosectomy) depending on the extension of the infection. We reported a case of rhino-orbital-cerebral mucormycosis (caused by Rhizopus species) with an invasive aspergillosis (caused by Aspergillus flavus) in a patient with uncontrolled diabetes mellitus.

A 55year-old man presented in our super-specialty dedicated COVID hospital with complaints of diplopia since last 5 days and drooping of eyelids since last 10 days of the left eye along with diminution of vision for last one month. Over left maxillary region there was presence of a firm swelling. Patient was a known case of diabetes mellitus Type 2. He was diagnosed with type 2 diabetes mellitus seven years before the current illness and was on irregular treatment with different oral hypoglycemic drugs. However, monitoring of blood sugar was not regularly done by the patient.

During second wave of COVID pandemic he was hospitalized with a three-day history of breathlessness, fever and generalized malaise. On examination, his pulse rate was 80/minute, blood pressure was 150/90 mmHg, respiratory rate was 28/minute, with a specific oxygen saturation (SpO2) of 86% on oxygen supplementation (8 liters/min). On physical examination, bilateral crepitations at lung bases reported with a normal cardiovascular system and neurological examination. In our dedicated COVID-19 biosafety laboratory 2, reverse-transcriptase polymerase chain reaction (RT-PCR) was performed from nasopharyngeal swab sample of the patient which came out to be positive for the SARS-CoV-2 virus.

He was started on hospital treatment protocol for COVID-19 management with intravenous methylprednisolone (40 mg twice daily), along with general supportive care. The management of diabetes mellitus was done with insulin which was adjusted as per a sliding scale based on patient’s before meal blood glucose levels to maintain less than 200 mg/dl. His oxygen saturation improved during the course of treatment from 86% to 99%. He gradually improved and advised to undergo home isolation after RT-PCR test came negative. On day 10 of discharge, drooping of eyelid was noted in left side and patient complaints of diplopia on 15th day of home isolation. A preliminary diagnosis of left orbital ptosis was made and he was transferred to a tertiary care centre. Relevant baseline investigations reported decreased hemoglobin value of 11.40 gm/dl (normal 13-17 gm/dl), mild lymphopenia (9.60%; normal 20-40%). C-reactive protein (CRP) was raised 19.63 mg/l (normal <5.0). The patient underwent minor biopsy procedure and fungal tissue debris was removed from left nasal cavity. Clinical specimens were collected and sent to the mycology laboratory for microbiological examination. On macroscopic examination, tissue was brown in colour. After mincing the tissues into small pieces, it was subjected to 10% potassium hydroxide (KOH) mount in which two different types of fungal elements in terms of hyphae was observed. To our surprise, there were narrow, branched, septate hyphae along with another type of hyphae which was broad and aseptate. The minced tissue specimen was inoculated on SDA tubes for fungal culture in duplicate; one set was incubated at 25°C and another at 37°C. On SDA tube, and after 48 hours 2 types of growth were observed. One was mat-like initially having rugose texture which changed to granular and powdery with yellowish-green surface pigment; another was cottony, woolly, and fluffy. Subculture from both types of growth was performed for isolation of both fungi. Microscopic examination with lactophenol cotton blue staining also confirmed 2 different types of fungus. The findings which favoured the diagnosis of Aspergillus flavus were hyaline, branched, septate hyphae with large globose vesicle containing uniseriate phialides fully covering the vesicle with chains of yellowish-green round conidia with foot cells attached at the conidiophores. Another finding was broad, aseptate hyphae with sporangiophores arising from the hyphae and enlarging distally into hemispherical columellae with flattened base containing round sporangia. At some places umbrella-shaped ruptured sporangia along with underdeveloped internodal rhizoids were seen confirming the diagnosis of Rhizopus arrhizus. The fungi were identified and reported as coinfection of Aspergillus flavus and Rhizopus arrhizus. Intravenous infusion of Amphotericin B was started. He tolerated Amphotericin B very effectively and ultimately after 17 days of therapy the patient recovered clinically. 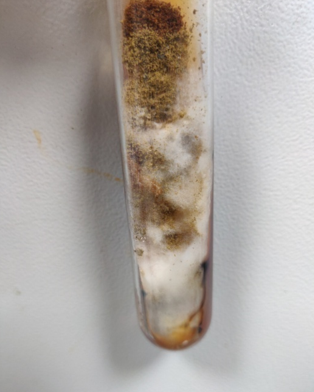 A&B: Subculture showing separate growth of A: Rhizopus arrizhus and B: Aspergillus flavus in SDA tube 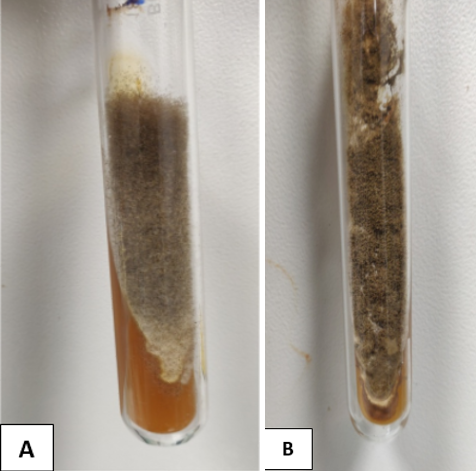 We have presented a scarce coinfection of mucormycosis and aspergillosis in an immunocompromised post COVID-19 affected patient with uncontrolled diabetes mellitus. The diagnosis was confirmed when causative agents were observed on tissue direct microscopy and culture on SDA tubes. Mucormycosis is a known opportunistic infection which spreads by direct and hematogenous dissemination and is associated with vascular invasion resulting in thrombosis, embolism, and infarction.4 Our patient had uncontrolled diabetes which is a well-known predisposing factor for mucormycosis. Rhizopus is the predominant pathogen accounting for 90% cases of rhinoocular cerebral mucormycosis (ROCM).1 Uncontrolled diabetes mellitus can alter the normal immunological response of patients to infections. Such patients have decreased granulocytic phagocytic activity with altered polymorphonuclear leucocyte response which further gets dysregulated in COVID-19 patients. Reports have suggested that the ability of the serum of immunocompromised patients to inhibit Rhizopus in vitro is reduced, which makes them suitable hosts for opportunistic fungal infections. Furthermore, in diabetics the development of acidosis and hyperglycemia provide an excellent environment for the fungus to grow. Invasive aspergillosis of the ROC region may spread to the adjoining regions appearing as yellow or black necrotic ulcers.6 If diagnosis and therapeutic interventions are delayed it may result in massive tissue destruction and, eventually death.

Conclusion: This case report of combined aspergillosis and mucormycosis of the ROC region is of importance because of its rarity. The principles of management are complete treatment of underlying medical disease, correction of hypoxia, acidosis, hyperglycemia, and electrolyte abnormalities. The mainstay of treatment is systemic Amphotericin B, preferably liposomal preparation. In this case, the patient was treated with IV Amphotericin B and because of good general health and better tolerance to the drugs, the outcome was better for this patient.

3 Indian Council of Medical Research. Evidence based advisory in the time of COVID-19 (screening, diagnosis & management of mucormycosis)2021https://www.icmr.gov.in/pdf/covid/techdoc/Mucormycosis_ADVISORY_FROM_ICMR_In_COVID19_time.pdf