COVID-19 Associated Mucormycosis (CAM) is an emerging infectious disease that has caused increased mortality & morbidity in India during this second wave of the pandemic. The country has reported more than 30,000 cases and over 2,000 deaths by Mucormycosis so far, according to sources from Union Health Ministry. CAM is now a notifiable disease. At our Tertiary care teaching hospital, which caters for COVID 19 management, we are reporting the first case of Rhino orbital CAM, which was caused by Rhizopus spp. Our patient had a history of contact with a suspected COVID 19 patient and was recently diagnosed with uncontrolled diabetes mellitus. A direct KOH microscopic examination of purulent material aspirated from the sinonasal polyp of the patient revealed fungal elements, and Rhizopus spp was isolated. Due to a shortage of Amphotericin B, the patient was referred to a government higher speciality centre for further management. The patient was followed up & was noted that he was treated with antifungal and discharged following recovery.

Many cases of Covid-19 Associated Mucormycosis (CAM) are reported from India, which is now causing increased morbidity & mortality. Few cases are reported from other parts of the world as well. Rhizopus is the most commonly reported aetiology of CAM.

Also, according to a study published in March 2021 by Prakashetal,2 Mucormycosis in India is 70 times more than global prevalence. The findings of this study attributed the high prevalence of diabetes cases in India to the increasing reports of Mucormycosis

Following the surge of CAM and the Government of India directive, several states in India made Mucormycosis a notifiable disease since May 2021

We are adding one case report of rhino-orbital CAM, which is caused by Rhizopus spp, from our tertiary care teaching institute to the existing database. We are reporting the findings of this case to emphasize the significance of appropriate initiation of the treatment for a specified period following accurate earlier identification can lead to resolution of Mucormycosis.

A 30-year-old male visited the ENT outpatient department (OPD) with C/O right nasal obstruction along with foul-smelling mucopurulent discharge & right eye swelling for one week. He is an alcoholic and a recently detected case of uncontrolled diabetes mellitus diagnosed ten days back (Fasting Blood Sugar level -388 mg/dl). He had a contact history of suspected COVID- 19 from his brother 25 days before, who had symptoms of severe myalgia. Both the patient & his brother had an RT-PCR test done for SARS COV-2, and the test report was negative for COVID-19. The negative report might have been due to Swab collection at an earlier stage of the disease. The patient had himself home quarantined and later on reported to our ENT OPD with the above complaints.

Purulent aspirate from the Nasal polyp of the patient was submitted for direct microscopic examination and fungal culture. The Pus aspirate was examined in 10% KOH (Himedia laboratories-Mumbai-India), Lacto phenol Cotton Blue (LCB) (Himedialaboratories – Mumbai – India) mount and Gram stain (Himedia laboratories-Mumbai-India). The aspirate was also inoculated onto blood agar and Sabouraud’s dextrose agar (Prepared with Dehydrated media from Himedia laboratories – Mumbai, India). The growth of the same fungus on one or more media (or) its growth in at least one medium, with direct microscopy revealing the presence of fungal hyphae in the smear, was considered as indicative of a diagnosis of Mucormycosis. Table 1 gives the results of the microbiological workup for the patient 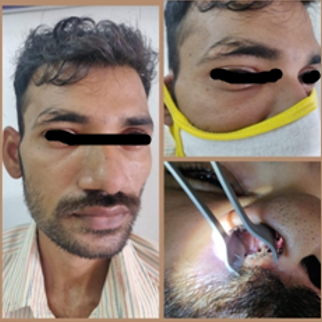 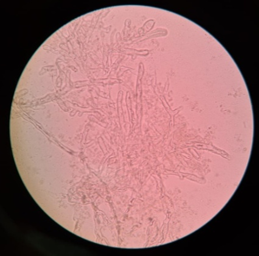 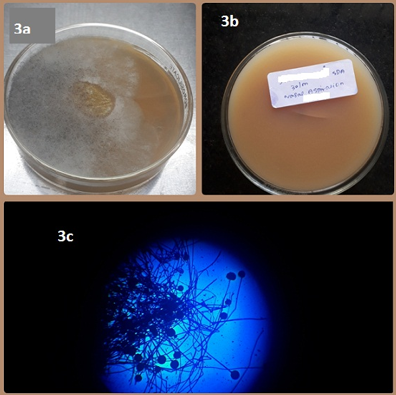 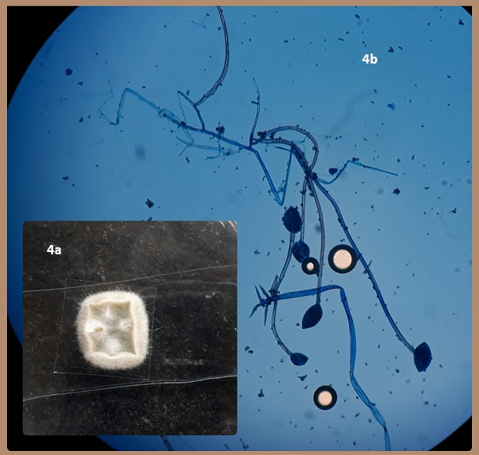 The COVID-19 pandemic has led to an increase in Mucormycosis cases in India, and many reasons like uncontrolled DM, inappropriate glucocorticoid use and even industrial oxygen use has been attributed to the emergence of CAM. Mucorales like Rhizopus arrhizus, Lichthemia, Mucor spp, Mortierella spp, Cunninghamella spp, Apophysomyces spp, Saksenaeae spp & Cokeromyces are agents of Mucormycosis. 9

A Pubmed search and a literature search revealed more than 100 cases from India & from other parts of the world. The key morphological features which identify the Mucorales are Broad aseptate hyphae /rarely septate hyphae and genus Rhizopus identified by collapsed and inverted umbrella-shaped sporangiophores with nodal Rhizoids.9, 10 An evidence-Based Advisory for Screening, Diagnosis & Management of Mucormycosis was released by the Indian Council of Medical Research.11

A preliminary reporting of Mucorales by microscopic identification was sent on the same day of receiving the clinical sample. A final microbiological diagnosis of Mucormycosis was reported after 48 hours base on growth characteristics. Because it is a notifiable disease, the report was sent to the district public health department. The treatment plan for the patient was IV Amphotericin B as per the guideline, and the patient was on insulin therapy for control of Diabetes. Due to a shortage of Amphotericin B, the patient was referred to a higher govt. speciality centre for further management

The patient was followed up & was informed that he underwent Functional Endoscopic Sinus Surgery (FESS), and a repeat confirmed identification of Mucorales was made with FESS sample. He was treated with parenteral Amphotericin B for two weeks. He was discharged following recovery with oral Posoconozole for another two weeks. During the review visit to ENT OPD, his clinical signs were found to have completely resolved.

The patient attended our ENT OPD with a history of one week of clinical symptoms and was admitted. The next day clinical sample was sent, and presumptive identification of Mucormycosis was reported. Due to a shortage of antifungals patient was referred to a higher govt—speciality centre. Patient was reconfirmed for Mucormycosis following the FESS procedure, and antifungal treatment was initiated. Approximately ten days after clinical signs patient was started with Amphotericin B for two weeks followed by oral Posoconozole for two weeks, which resulted in resolution of clinical signs. Hence timely initiation of appropriate treatment will save the patient. 5

From the month after India reported its index case of CAM in the wake of the second wave of the novel Coronavirus disease (COVID-19) pandemic, there is a surge in cases of this fungal infection.

In conclusion, CAM is an emerging problem necessitating increased vigilance in COVID-19 patients, even those who have recovered. CAM portends a poor prognosis and warrants a meticulous microbiological examination which is essential for earlier identification of Mucorales as this will help in the complete resolution of CAM.

H Prakash A Chakrabarti Epidemiology of Mucormycosis in IndiaMicroorganisms20219352310.3390/microorganisms9030523

Evidence Based Advisory in the Time of COVID-19 (Screening, Diagnosis & Management of Mucormycosis)2021https://www.icmr.gov.in/pdf/covid/techdoc/Mucormycosis_ADVISORY_FROM_ICMR_In_COVID19_time.pdf